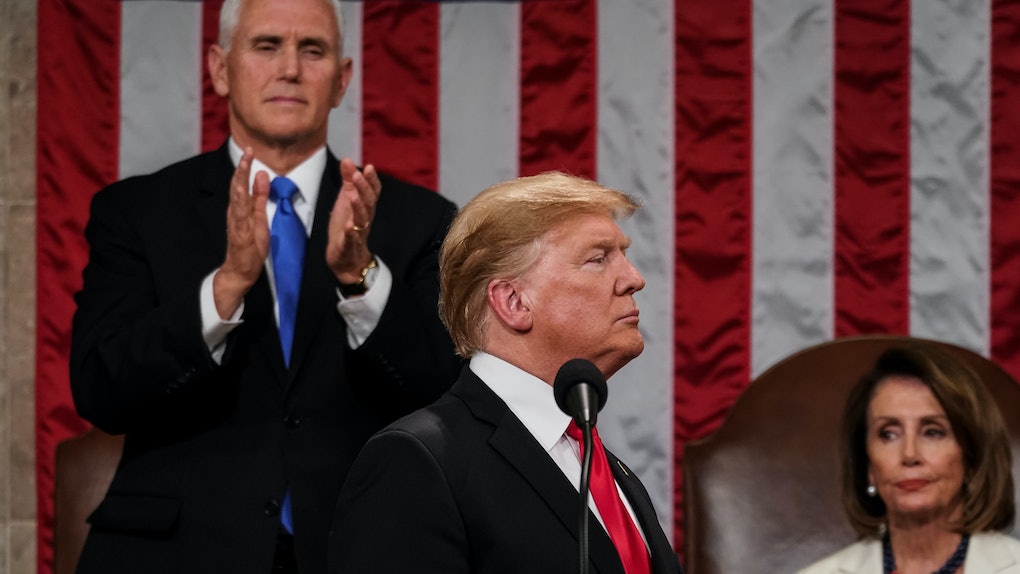 If we can all ever agree on one thing in this life, it's that President Donald Trump and House Speaker Nancy Pelosi (D-California) aren't exactly BFFs. Though they seem to keep things cordial (for the most part, at least), there have been some moments that suggested that it might all be an act. With that, let's take a look at these three photos of Donald Trump and Nancy Pelosi that truly lay out their relationship.

That is, if you can even call it a relationship. I mean, Pelosi herself isn't even sure where she stands with the president. When asked about her ties with Trump in a March 11 interview with The Washington Post, Pelosi said, "Is there a relationship?" If that doesn't speak volumes, maybe some of their comments about each other will. For instance, Trump has called for Pelosi to be investigated and taken shots at the party she's affiliated with, tweeting in January 2017 the Democratic party doesn't "work." Representatives for Pelosi did not immediately return Elite Daily's request for comment on his remarks. Pelosi, on the other hand, has said Trump is unfit for the White House and questioned his manhood. (Yes, Pelosi, who often takes softer tones, really went there.) Elite Daily reached out to the White House for comment or response, but did not bear back.

They say that a picture is worth a thousand words, though, so let's take a closer look at a few photos of these two.

It's true. While delivering his 2019 State of The Union address on Feb. 5, Trump called for more bipartisanship cooperation, sounding off against "revenge politics" in the divided Congress. Pelosi — who has found herself in the middle of the president's Twitter tirades — then sprang from her seat to give him a round of applause, clapping loudly with her lips pursed in a smirk and her eyebrows raised. She continued this even while making eye contact with the president, which reeks of petty, TBH.

While Pelosi later claimed that she wasn't being "sarcastic," her daughter, Christine Pelosi, tweeted otherwise, writing:

oh yes that clap took me back to the teen years. She knows. And she knows that you know. And frankly she’s disappointed that you thought this would work. But here’s a clap. #youtriedit

2. They Brawl Over The Border Wall

Back in December of 2018, Pelosi, Trump, Vice President Mike Pence and Senate Minority Leader Chuck Schumer (D-New York) met in a televised Oval Office meeting to discuss border security and government funding ahead of a possible government shutdown. It wasn't long before things got heated.

Schumer and Trump threw jabs over immigration and election results while Pelosi played the peacemaker, urging the president not to debate in front of the cameras. It's probably safe to say you could've cut the tension in the room with a knife, as evidenced by Pence's facial expression, and both Pelosi and Trump's mannerisms.

Eventually, the meeting ended and a government shutdown went into effect, which lasted until Jan. 25, becoming the longest shutdown in U.S. history.

3. They Came Together To Avert A Government Shutdown

A year before that shutdown in December 2017, Pelosi and Trump — along with then-U.S. House Speaker Paul Ryan, Pence, Senate Majority Leader Mitch McConnell, Schumer, and Jim Mattis, U.S. Secretary of Defense — joined forces to negotiate a plan for an immigration program and military spending in an effort to avert a government shutdown. Despite their differing viewpoints, some of the officials were seen smiling at one point, which really chalks up the relationship between Pelosi and Trump.

While they might not get along, Pelosi once told The Washington Post that she keeps a respectful relationship with the president out of respect for his position, saying:

My relationship toward him is respectful, respectful of the office that he holds. Straightforward, just tell him what I think. And I always say you’re not going to hear me saying anything publicly that I’m not saying here in the office. Hopeful that at some point we can find common ground that he’ll stick to. So, yeah, respectful, honest and hopeful.

Take notes, folks. That's how you do it.