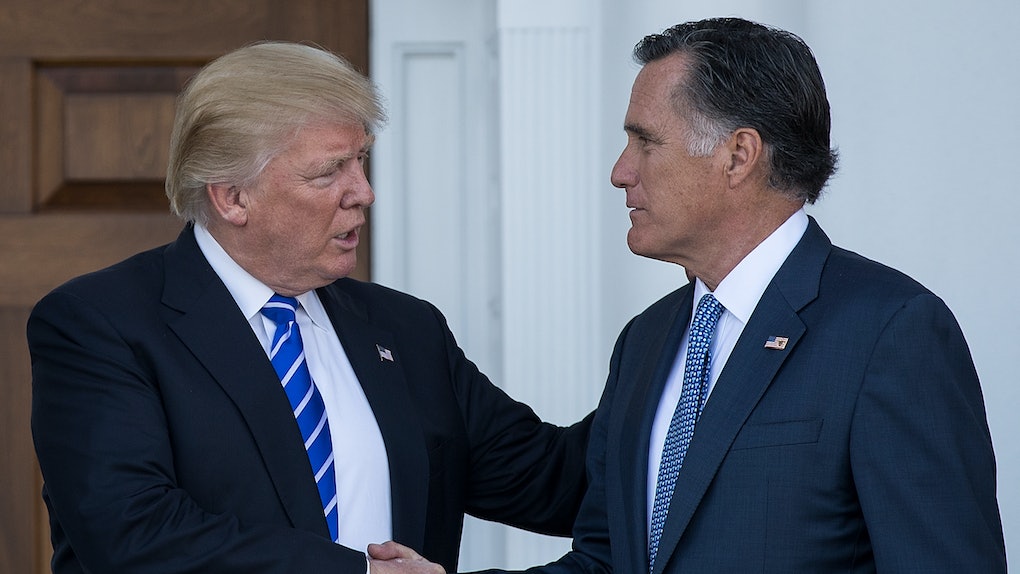 Just hours after Mitt Romney shared what might be the harshest Republican critique yet of Donald Trump's actions as detailed in the redacted Mueller report, the President is hitting back on Twitter with a very personal attack. Donald Trump's response to Mitt Romney's harsh criticism pokes at the former presidential candidate's failure to win a seat in the Oval Office when he ran against President Obama in 2012 — and it's a lot. There's even an accompanying video that contrasts news coverage of Romney's loss to footage of Trump's win after the 2016 White House race, so he's definitely not holding back.

On Saturday, April 20, the president came out with fists swinging (er, fingers typing) in light of the Utah senator's condemnation one day earlier. Following the highly-anticipated release of a redacted version of Special Counsel Mueller's probe on Thursday, April 18, Romney set himself apart from his Republican peers with his denunciation of President Trump's actions during the Russia investigation.

In a statement shared on his Twitter account on Friday, April 19, Romney said he was "sickened" by the president's conduct, writing:

It is good news that there was insufficient evidence to charge the President of the United States with having conspired with a foreign adversary or with having obstructed justice. The alternative would have taken us through a wrenching process with the potential for constitutional crisis. The business of government can move on.

However, despite Mueller's final conclusion that didn't charge collusion or obstruction, Romney slammed the idea that the report was a total exoneration of the president and his peers. Trump has been touting both the Mueller report and Barr's March 24 summary as just that. The White House did not immediately reply to Elite Daily's request for further comment on the April 18 release of the redacted Mueller report.

"I am sickened at the extent and pervasiveness of dishonesty and misdirection by individuals in the highest office of the land, including the President," he wrote. "I am also appalled that, among other things, fellow citizens working in a campaign for president welcomed help from Russia — including information that had been illegally obtained; that none of to hem acted for inform American law enforcement; and that the campaign chairman was actively promoting Russian interests in Ukraine."

He concluded, "Reading the report is a sobering revelation of how far we have strayed from the aspirations and principles of our founders."

It was a pretty harsh critique, and President Trump was not here for the comment that he was "sickened" by his actions. However, instead of responding to the controversial findings from the probe or directly addressing Romney's concerns, the POTUS decided to hit back by throwing it back to 2012.

If @MittRomney spent the same energy fighting Barack Obama as he does fighting Donald Trump, he could have won the race (maybe)!

He also shared a video that contrasted news coverage of his 2016 presidential election win versus that of Romney's loss in 2012.

It's the same winner/loser rhetoric that Trump tends to employ with wording that some might recognize from Trump's criticism of other former Republican presidential candidate, the late Senator John McCain. In fact, this isn't the first time Trump has referenced Romney's 2012 loss in response to the Senator's criticism of his presidency.

While still campaigning as a presidential candidate in June 2016, Trump tweeted that Romney "choked like a dog" when running against Obama.

As of now, Romney has yet to respond to the president's tweets, but it's likely that they'll both be taking a break from their feud of words (at least for now) to focus on the aftermath of the tragic bombing in Sri Lanka. Although, following his tweet sending condolences on April 21, President Trump continued on with talk of the Muller report, so stay tuned.