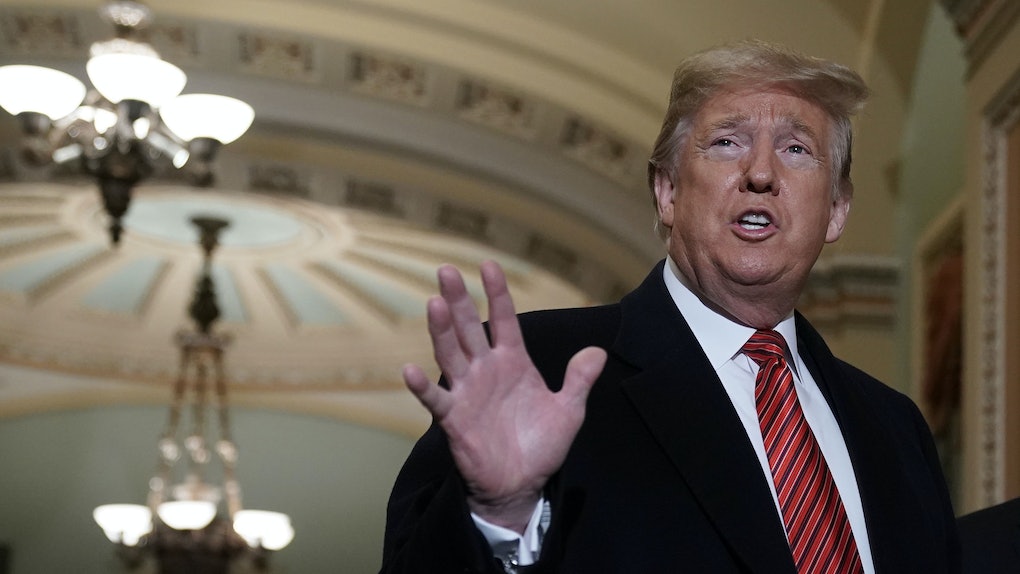 On Saturday, Jan. 12, President Donald Trump was asked point blank about the controversy that's been at the forefront of a long-running investigation: his alleged ties to Russia. Unfortunately, Donald Trump's response to being asked if he works for Russia during an exclusive interview with Fox News was probably not want viewers wanted to hear, because his answer seemed to completely evade the question. The question arose following a report from The New York Times detailing a reported FBI investigation into President Trump reportedly following his firing of James Comey in May 2017. Elite Daily reached out to the White House for comment on the NYT report, but did not hear back at the time of publication.

During a telephone interview broadcast on Fox News Channel on Jan. 12, the president was queried about his controversial relationship with Russian President Vladimir Putin and potential ties to Kremlin. President Trump has repeatedly denied collusion, and has called the Special Counsel's investigation into possible Russian collusion a "witch hunt." During the discussion, Justice with Judge Jeanine host Jeanine Pirro asked the POTUS, "Are you now or have you ever worked for Russia?"

Instead of answering the question straight on, the president skirted around the issue by focusing on a Friday, Jan. 11 feature by The New York Times that claims the FBI opened an investigation shortly after Trump was elected to office to determine whether he was a Russian agent or if he had unknowingly fallen under the influence of the Kremlin. Elite Daily reached out to the White House for comment on the article's claims, but did not hear back at the time of publication.

Trump continued in his response to Pirro's question regarding possible Russian ties by claiming, "If you ask the folks in Russia, I’ve been tougher on Russia than anybody else, any other ... probably any other president, period, but certainly the last three or four presidents." The Twitterverse along with many political pundits quickly picked up on the fact that he never outright denied the claim.

Trump was also less than direct when Pirro questioned him about disclosing details of his controversial meetings with President Putin in Hamburg, Germany back in July 2017 as well as a secret two-hour conversation with the Russian leader in Helsinki, Finland which none of Trump's aides were reportedly allowed to attend, per The Washington Post.

The publication's report also claimed POTUS reportedly went to "extraordinary lengths to conceal details of his conversations" with Putin, which reportedly included five meetings. In an email to Elite Daily, the White House provided a statement on The Washington Post report from White House Press Secretary Sarah Huckabee Sanders:

The Washington Post story is so outrageously inaccurate it doesn't even warrant a response. The liberal media has wasted two years trying to manufacture a fake collusion scandal instead of reporting the fact that unlike President Obama, who let Russia and other foreign adversaries push America around, President Trump has actually been tough on Russia.

The Washington Post claims that Trump reportedly took his interpreter's notes after the meeting and told his linguist not to speak about what had gone down with other government aides, per several U.S. officials.

When Pirro asked him if he would share the details of the private conversation on Saturday night, Trump responded, "I would. I don’t care."

He continued, "I had a conversation like every president does. You sit with the president of various countries. I do it with all countries. We had a great conversation. We were talking about Israel and securing Israel, and lots of other things. It was a great conversation. I'm not keeping anything under wraps. I couldn't care less." Elite Daily reached out to the White House for comment on if and when President Trump would release the reported meeting notes, but did not hear back at the time of publication.

Only time will tell if the reported details of President Trump and Putin's conversation become public as Special Counsel Robert Mueller continues to investigate possible Russian interference in the 2016 election.