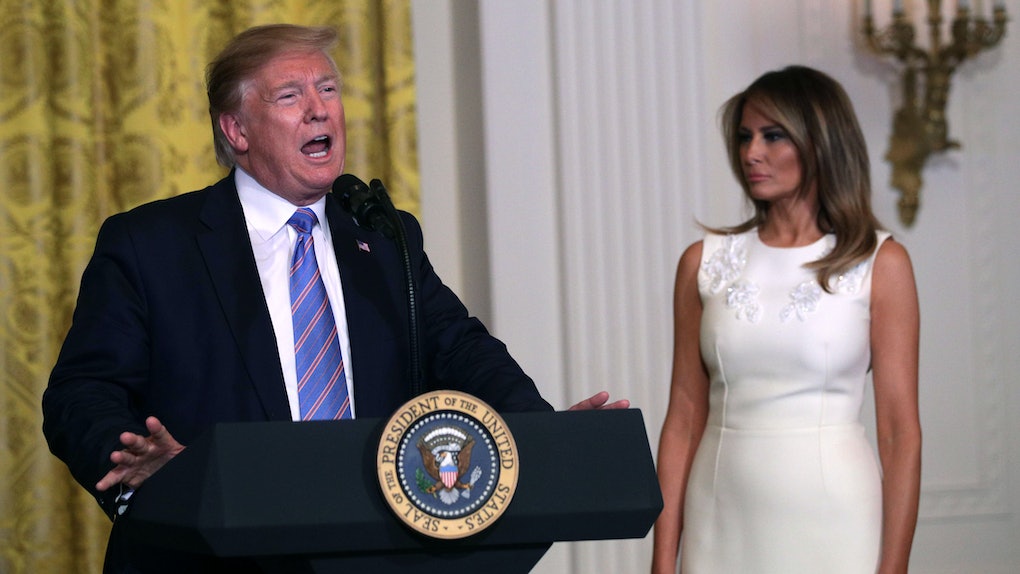 On Sunday, May 12, President Donald Trump started Mother's Day morning by heading to his social media platform of choice to send off a firestorm of tweets about Special Counsel Robert Mueller's "hoax" investigation. When he took a moment to share a message acknowledging the holiday, Trump's followers couldn't help noticing that his celebration of mothers failed to mention a certain someone. Donald Trump's Mother's Day 2019 tweet didn't acknowledge his wife, Melania Trump, and Twitter is asking where her shout-out was.

The president was one of countless fathers who headed to social media to celebrate the mothers in their lives on Sunday, May 12, but Twitter users couldn't help but comparing Trump's simple tweet — which featured a photograph of flowers shot at the White House and the words "Happy Mother's Day from Donald J. Trump" — to that of his predecessor, former President Obama.

"Happy Mother's Day to the most caring, brilliant, funny, and grounded woman I know," the former POTUS captioned a photograph of the "Becoming" author with their daughters Sasha and Malia at the Great Wall of China.

He continued, "A perfect role model not just for our daughters, but so many others. Love you, @MichelleObama."

After President Trump shared his message, the Twitterverse headed to the social media platform to wish First Lady Melania Trump a happy Mother's Day themselves while calling out the president on his oversight. People seemed to wonder: Where is Melania's Mother's Day wish?

In addition to President Trump's afternoon tweet, the White House Twitter account shared several videos celebrating the sacrifice of military moms and moms with spouses or soldiers in the military. In one clip, the president could be seen saying, "I want to express our incredible appreciation to all of you. The moms serving our Nation in uniform, the mothers of our great heroes, and the moms with spouses who serve in the armed forces: your unwavering dedication and support strengthens our entire Nation."

In an official White House statement, the president also reflected on the general meaning of the annual holiday, saying:

On this Mother’s Day, we pay tribute to our mothers, whether we are their children by birth, adoption, or foster care, for their devotion to seeing us lead happy and successful lives. Today, and every day, let us ensure that our mothers know and feel our deep gratitude for the gift of life and for their unmatched sacrifices to strengthen our families and our Nation.

It's not the first year that President Trump has failed to mention Melania or his daughter Ivanka Trump, who has three kids of her own, in his Mother's Day posts. Last year, the president celebrated the sacrifice of mothers while focusing on some memories about his own mom, the late Mary Anne MacLeod.

"She was just incredible — warm, loving, really smart, could be tough if she had to be but basically she was a really nice person," he said in a video shared to his Twitter account back in 2018. "So much of what I've done and so much of what I've become is because of my mother. I miss her a lot."

Despite the critiques in the comment section about this year's Mother's Day wish, the president has specifically named Melania in past posts, like in 2017.

While Twitter may be wondering why Trump's 2019 post didn't hype the first lady in the same way as he's done in the past, Melania appears to have spent at least part of the day with President Trump, as she's seen standing next to him in the videos of the president's address to military moms. So, I'd like to think she likely got an in-person Mother's Day wish from her husband. Melania also sent a happy Mother's Day wish to the moms out there, so even though people on Twitter might be wondering where her shout-out from the president was, it looks like FLOTUS was happy to celebrate the day, with or without a personalized tweet from her husband.