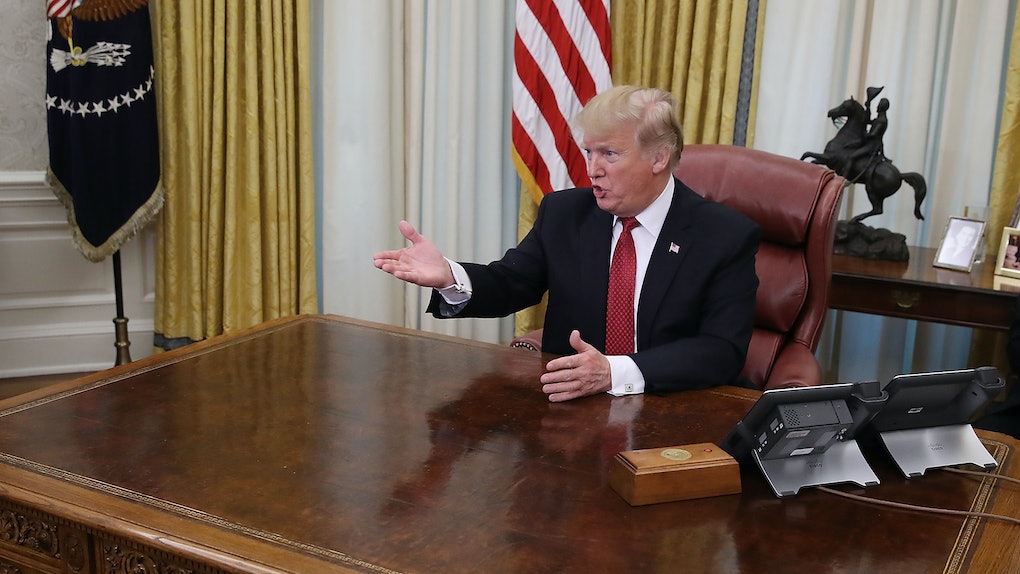 Donald Trump's "Executive Time" Takes Up More Than Half His Days, Report Says

Though President Donald Trump's unorthodox approach to his presidency is a well-established topic, a new report by Axios reverberated across Washington on Sunday as it revealed most of the president's schedule for the last three months, and let's just say it's a lot. The report, published Feb. 3, used dozens of pages of documents that were reportedly leaked by a staffer to detail where and how the president has been spending his working hours. Among the revelations was the statistic that, on average, Donald Trump's "executive time" takes up more than half of his day at work. The White House had not responded to Elite Daily's request for comment on the Axios report as of publication.

The leaked documents covered almost every day of the president's official working schedule for the last three months, totaling over 500 hours. Of those hours, some 297 — or more than 60 percent — were apparently allocated for "executive time," an enigmatic phrase that has come to be interpreted as time for the president to make calls to friends, advisers, and fellow GOP members, be on social media, and watch TV. The White House did not immediately respond to Elite Daily's questions about what "executive time" entails. In a statement to Axios, White House Press Secretary Sarah Huckabee Sanders said, "While [the president] spends much of his average day in scheduled meetings, events, and calls, there is time to allow for a more creative environment that has helped make him the most productive President in modern history."

It's not the first time media has reported on the president's high rate of taking personal time as president, and he's been regularly criticized for his frequent vacations and trips to his own resorts. According to Trump Golf Count, the president has reportedly logged a total 156 visits to golf courses since taking office, and has likely played golf on 123 of those, though Elite Daily hasn't independently confirmed that data. The website estimates that, based on costs of flights and other metrics, the cost to taxpayers for those visit has run a tab of about $87 million.

While it was already known that Trump takes a hearty amount of "executive time" during the workday, the Axios report puts that figure much higher than has been previously understood, and builds on reports that the president's official business is rapidly seeming to shrink while the country has continue to face various crises.

Some schedules reveal that the president's official daily agenda contains only a single 30-minute meeting, or a total of one hour of meetings compared with seven hours of "executive time." Though the president is said to begin his day around 5 or 6 a.m., the report reveals that Trump's official day doesn't tend to begin until 11 a.m., and often ends around 6 p.m., often with multiple hours built in for lunch and personal time. Axios does note, however, that many of the president's meetings may be off-the-cuff and not included in the schedule.

"The time in the morning is a mix of residence time and Oval Office time but he always has calls with staff, Hill members, cabinet members and foreign leaders during this time," Sanders also told Axios in response to the article. But presidential historian and author Chris Whipple told Axios that "there's almost no [historical] parallel" for Trump's schedule.

Users on Twitter responded to the Axios report negatively.

Trump did find a defender in Newt Gingrich, however, who claimed that this work ethic was found among other elites as well.

It is not known who in the West Wing leaked the documents to Axios, but the fact that there was a breach from inside the White House at all also seemed to cause anger from the president's aides. White House Operations Director Madeleine Westerhout responded to the Axios report on Twitter by calling it "a disgraceful breach of trust."

Politico's Josh Gerstein pushed back against Westerhout's scathing rebuke, pointing out that if the schedules were simply made more accessible to reporters and the public, leaks wouldn't be necessary.

"White House is entirely free to publish details of those 'hundreds of calls and meetings' Trump is said to take daily," Gerstein tweeted. "In fact, if they were on the record, a story like the Axios one wouldn't have much sting."

The timing was arguably less than ideal, as the last three months have been rocky ones in Washington. In recent weeks the president has warned about what he calls a "crisis" on the U.S.-Mexico border, the urgency of which he has suggested could warrant declaring a national emergency in order to fund a border wall. Meanwhile, his demand for funding to build said border wall resulted in a stalemate in Congress, which led the longest government shutdown in U.S. history, with some 800,000 federal workers and countless more contractors missing out on two consecutive paychecks and suffering financial hardship. Add to this the decisions to remove U.S. troops from Syria and other key positions in the Middle East, threatening international stability, as well as the worst fourth-quarter stock market finish since the Great Depression that sent investors panicking.

So if the Axios report is accurate, it would indicate a president with a light workload while the country has been dealing with turbulent times. If only the rest of us were so lucky.