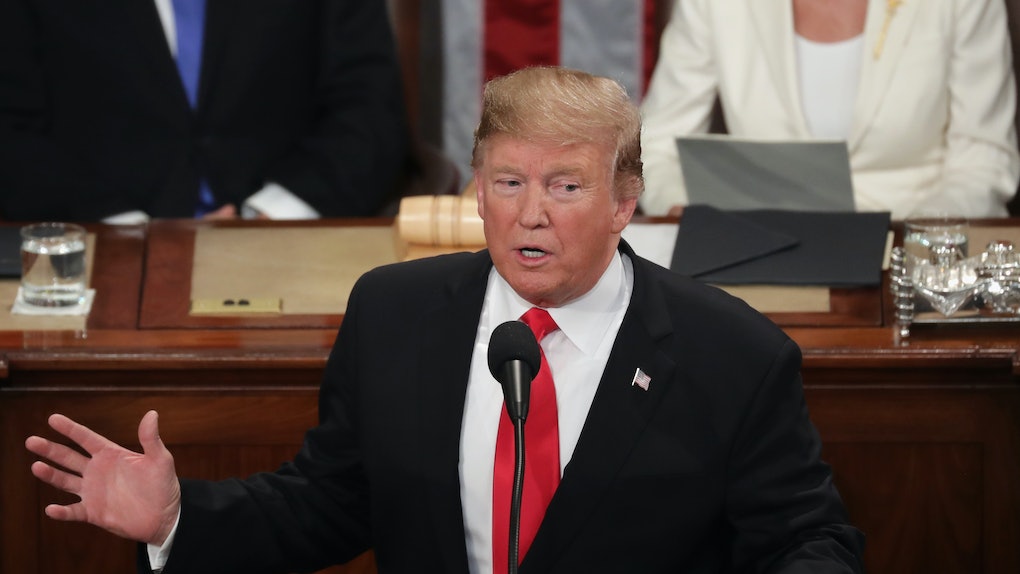 On Tuesday, Feb 5, President Trump delivered his highly anticipated State of the Union address, and unsurprisingly, he took a jab at special counsel Robert Mueller, who is currently investigating allegations of Russian interference and collusion in the 2016 Presidential Election. President Trump has repeatedly denied collusion and called the investigation a "witch hunt." While Donald Trump's dig at the Mueller investigation during the 2019 State of the Union didn't mention the attorney by name, it slammed "ridiculous, partisan investigations."

After starting his 2019 address on a unexpectedly bipartisan note, telling the audience, "Victory is not winning for our party, victory is winning for our country," President Trump ended a spiel about the United States' growing economy by naming the things that are holding the country back.

"Our country is vibrant and our economy is thriving like never before. Friday it was announced we added another 304,000 jobs last month alone, almost double the number expected," he told the crowd before slipping in a pointed reference to the Mueller investigation, per Vox's transcript of the 2019 speech. "An economic miracle is taking place in the United States, and the only thing that can stop it are foolish wars, politics, or ridiculous, partisan investigations."

If there is going to be peace in legislation, there cannot be war and investigation. It just does not work that way.

Trump's statement comes less than a month after Roger Stone became the sixth member of the 2016 Trump campaign to be indicted in the investigation. While the longtime Trump associate said he "categorically denied working with Russians" in a statement to reporters after his trial, Stone was arrested on one count of obstruction, five counts of making false statements, and one count of witness tampering on Jan. 25, per the indictment filing. The White House and representatives for Stone did not return Elite Daily's requests for comment at the time

The long-running investigation has led to the arrests of almost three dozen Russian nationals and three Russian businesses, as well as six Trump aides (five of which have pled guilty to the charges): George Papadopoulos, Paul Manafort, Rick Gates, Michael Flynn, Michael Cohen, and now, Stone, per Business Insider.

For his part, President Trump has repeatedly called the investigation a "witch hunt." While the POTUS has repeatedly denied colluding with Russia, it's a lot for him to say that the the intelligence community shouldn't be doing their jobs and investigating potential interference from another country into the U.S.'s elections, or that the two political parties won't be able to have "peace in legislation" due to an investigation.

While there's no official end date slated for the Mueller investigation, Acting Attorney General Matthew Whitaker said during a Jan. 28 press conference that he believes the probe is "close to being completed," meaning the public could be privy to a full, confidential report sooner rather than later, depending on whether the Attorney General chooses to share the report's findings with the public first before passing it along to Congress. For now, everyone will just have to wait and see.