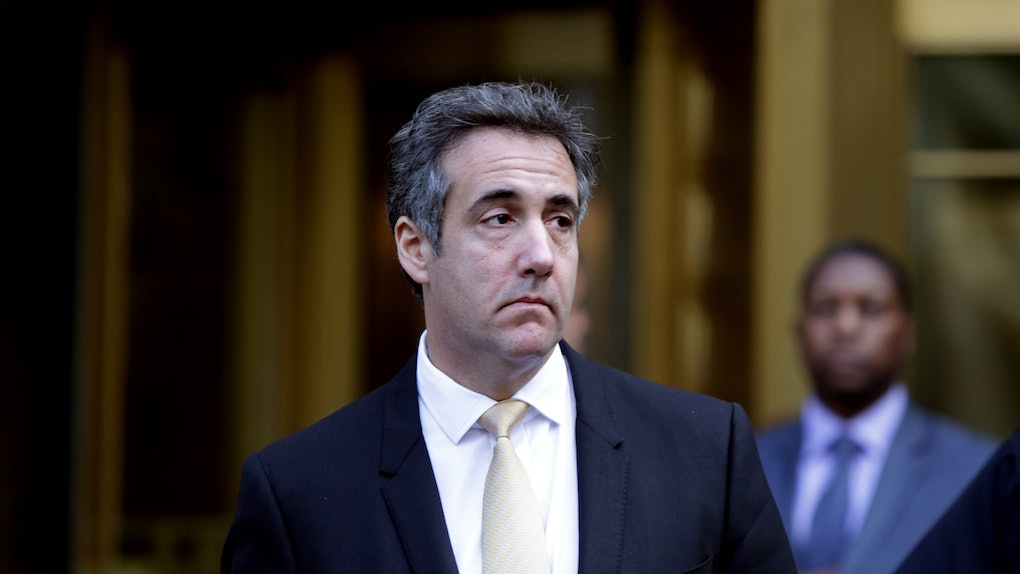 Donald Trump's Comment About Michael Cohen "Lying" Is Yet Another Development

Just when we thought this Donald Trump-Michael Cohen saga was coming to a close, a new development has come into play. It's no secret that there's a bit of animosity between the two men at the moment, but Donald Trump's comment about Michael Cohen "lying" might just add fuel to this flame. Here we go again, everyone.

On Tuesday, Oct. 16, Donald Trump sat down with the Associated Press to discuss topics ranging from climate change to Brett Kavanaugh's Supreme Court confirmation. However, the subject of Trump's former lawyer, Michael Cohen, came up during the chat, particularly in regards to Cohen swearing under oath in August that Trump directed him to pay Stormy Daniels, legal name Stephanie Clifford, for her silence about an alleged affair right before the 2016 presidential election. Well, naturally Trump had a few things to say about Cohen's claims, and told the AP that Cohen was "lying" about being directed to pay Daniels despite his testimony being under oath. Elite Daily reached out to the White House and Cohen's team for further comment about Trump's statement, but did not hear back in time for publication.

Do you smell that? That's the aroma of a freshly brewed pot of tea just waiting to be poured.

The drama between Trump and Cohen has been happening for months, but things finally came to a climax when Cohen pleaded guilty of financial fraud in August. In addition to pleading guilty, Cohen also admitted to paying both Stormy Daniels and Karen McDougal, two women who claim to have had affairs with Trump, at the "direction of the candidate," which could cause issues for the president regarding campaign finance laws, which require campaign expenditures to be disclosed to the Federal Elections Committee (FEC), and prohibit donations of more than a certain amount. Trump has consistently denied Daniels' and McDougal's affair allegations, and Elite Daily reached out to the White House for additional comment about the alleged affairs, but did not hear back.

Following Cohen's plea, his lawyer Lanny Davis shared a statement with Elite Daily in August about the payment to the two women. Davis said,

Michael Cohen took this step today so that his family can move on to the next chapter. This is Michael fulfilling his promise made on July 2nd to put his family and country first and tell the truth about Donald Trump. Today he stood up and testified under oath that Donald Trump directed him to commit a crime by making payments to two women for the principal purpose of influencing an election. If those payments were a crime for Michael Cohen, then why wouldn't they be a crime for Donald Trump?

It's not surprising that Trump wasn't too thrilled to hear that Cohen had accepted a plea deal. Once news broke that Cohen had pled guilty to financial fraud, Trump took to Twitter to throw some not-so-subtle shade at his former attorney.

Of course this ordeal was a few months ago, and plenty has happened since that might have distracted Trump from his drama with Cohen. However, it looks like the president might still be holding some grudges that he just can't shake. We'll just have to see how this unfolds.