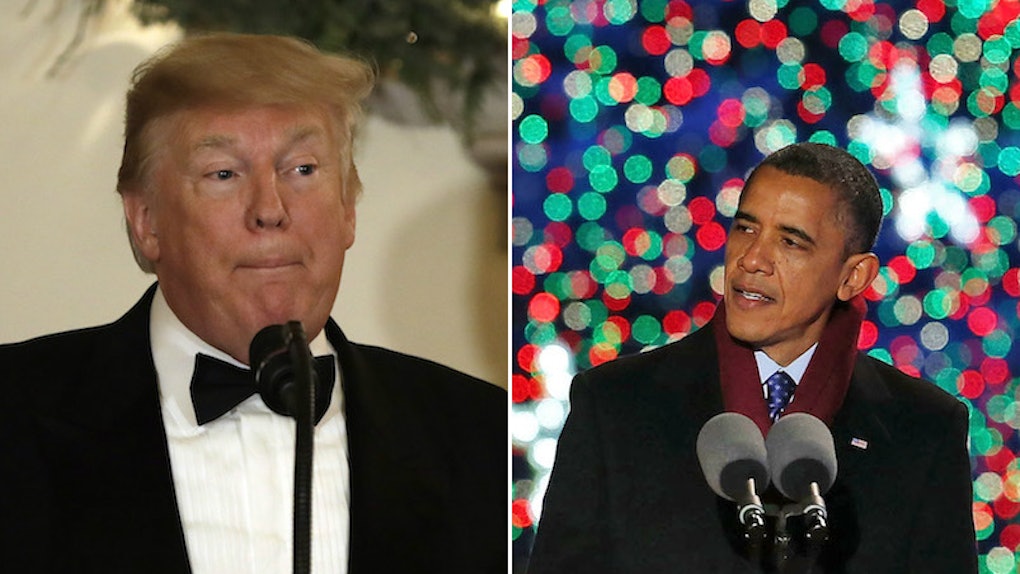 Christmas is barely a week away (!), and the first family is sharing its holiday wishes with the country. On Tuesday, Dec. 18, the White House released the official Christmas portrait of President Donald Trump and first lady Melania Trump, marking the second time the couple has celebrated the winter festivities at 1600 Pennsylvania Ave. But despite having remarkably different presidencies so far, Trump's versus Obama's second Christmas photos show when it comes to celebrating the holidays, both presidents put on a good — if slightly different — show.

As you might expect from the two presidents, their holiday greetings in general have varied greatly in their respective first years in office, and the second year was no exception. For the Christmas cards that the first family traditionally sends out in December, things didn't go so well last year when the official Donald J. Trump campaign decided to send out a virtual Christmas card with the option to send a note to the president and his family for the holidays. Needless to say, the gesture was co-opted into a troll-fest.

But the official portrait of the president and his wife this year has so far gone off without a hitch and has kept pretty close in line with previous photos. The photo, taken by Andrea Hanks, was taken on Saturday, Dec. 15 in the White House's Cross Hall.

Honestly, whatever you think of the Trumps or their decor, that's a nice photo.

It looks like the second year of a presidential term is good luck for a sharp photo, too. At the same point in Obama's presidency, the first couple posed for their photo in front of the official White House Christmas Tree. To be honest, the two portraits seem fairly similar at first glance. In both cases, the president and first lady are all dressed up in tuxedos and gowns with Christmas trees in the background, right? It's nice to see some traditions hold steady.

However, it's worth noticing one key area where their two portraits aren't exactly the same. Donald and Melania are standing shoulder to shoulder, holding hands, facing directly forward to the camera in a more formal stance, with a full picture of the hall behind them. Comparatively, Michelle and Barack stand close together at an angle with their arms around each other, and the camera is set in a close-up and more intimate shot.

The difference in posture is probably to be expected, though, given that the Obamas have always been famously affectionate. Similarly, it's not a surprise that the Trumps played it simple with a clasping of hands, given that their dynamic has become more tense over time, at least by outward appearance, according to body language experts. In fact, experts say that the two couples have almost opposite body language dynamics.

But in their first official Christmas portrait in office, the Obamas, while still arguably in a more intimate and cozy setting, had a more similar stance to the Trumps in their 2018 photos.

For comparison, here is Donald and Melania's photo from their first year in the White House (spoiler alert: it's pretty similar to this year's).

However the first couples do it, it's still a pretty picture.

Over the years, the Obamas shared several family portraits around the holidays — and the photos were always on-brand, showing the classic adorable first family in all its glory.

Aside from the portraits, the Obamas and the Trumps so far have taken diverging paths on how they've handled the festivities and decorum of the holiday. While both administrations have held the traditional Christmas tree lighting ceremonies as well as celebrations for Hanukkah and Kwanzaa, Trump, in his official greeting at least, has seemed to focus more on the Christian holiday.

For example, Trump's official White House Christmas card in 2017, using the term "Merry Christmas," was a departure from those from Obama, which often wished recipients "Happy Holidays" or "Season's Greetings."

Although last year they weren't in office, the Obamas did send out a greeting wishing everyone a Merry Christmas in 2017.

Trump has a long way to go before he reaches the eight Christmases in the White House that Obama enjoyed, so who knows what might change in years to come. But less the minor details, at least the two first families' portraits have stuck pretty close to each other.