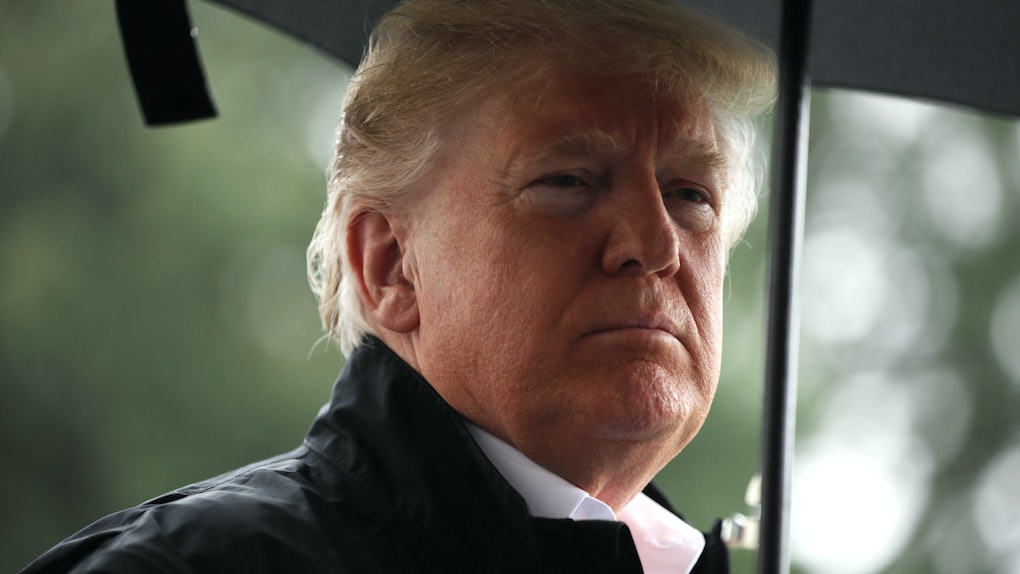 Interviews with Donald Trump are unforgettable to say the least. However, this particular one might have taken the cake. On Sunday, Oct. 14, while chatting with CBS News' Lesely Stahl on 60 Minutes, Donald Trump said he treated Christine Blasey Ford with "respect" despite all the controversy surrounding the ordeal. Classic.

On Sunday, Oct. 14, Trump and Stahl sat down to discuss a few topics on the agenda, ranging from climate change to Trump's relationship with Russian President Vladimir Putin. However, the subject of Brett Kavanaugh's Supreme Court confirmation came up in discussion, and Stahl brought up Trump's behavior towards Dr. Christine Blasey Ford, who accused Kavanaugh of sexually assaulting her back in high school, which Kavanaugh has denied. Representatives for Kavanaugh did not respond to Elite Daily's request for additional comment. Well, in response to Stahl's inquiry, Trump claimed that he thinks he treated Ford with "respect," despite him apparently mocking her during an October rally in Mississippi. Elite Daily reached out to the White House at the time for additional comment, but did not hear back.

"Do you think you treated her with respect?" Stahl asked Trump during the 60 Minutes interview.

Following his comment, Trump immediately shut down Stahl's followup questions about his treatment of Ford by ultimately stating that "they won" on Kavanaugh's confirmation. "You know what? I'm not gonna get into it because we won," Trump said. "It doesn't matter. We won." Representatives for Ford did not respond to Elite Daily's request for comment on the president's remarks.

Even though Trump may believe he was a complete gentleman during the Kavanaugh and Ford ordeal, others might think otherwise. Throughout Kavanaugh's Supreme Court confirmation vote, Trump actively championed Kavanaugh's denials and spoke against Ford's sexual assault allegations. However, it was Trump's mimicry of Ford during a rally in Mississippi on Oct. 2 that raised huge controversy among the public.

On Oct. 2, Trump headed to South Haven, Mississippi to address a group of supporters during a rally focusing on the upcoming midterm elections. The event took place just days after Ford appeared before the Senate Judiciary Committee on Sept. 27 and delivered powerful testimony about her claims against Kavanaugh. Despite her bravery, Trump decided to openly speak against Ford during the rally and even made fun of her testimony. He said imitation of Ford,

Elite Daily reached out to the White House at the time for additional comment, but did not hear back.

On some occasions, mimicry may be the finest form of flattery, but clearly that's not the case in this circumstance. Trump's rally sparked huge controversy among the public, but Ford reportedly was extremely hurt and disturbed by Trump's behavior. To be fair, who could blame her? On Oct. 6, one of Ford's lawyers, Lisa Banks, spoke to CNN about Ford's reported response to Trump's rally, particularly about how "upset" she was while watching it herself. Elite Daily reached out to the White House and Ford's lawyers for comment about the reported reaction at the time, but did not hear back. Banks said,

Despite Ford reportedly being upset, Banks told CNN that the California professor still is proud of taking the stand, and doesn't regret her decision to testify. Banks said,

I don't think she has any regrets. I think she feels like she did the right thing. And this was what she wanted to do, which was provide this information to the committee so they could make the best decision possible.

Trump may think he has respect down, but if I were him I'd give myself a refresher on exactly what that definition entails.