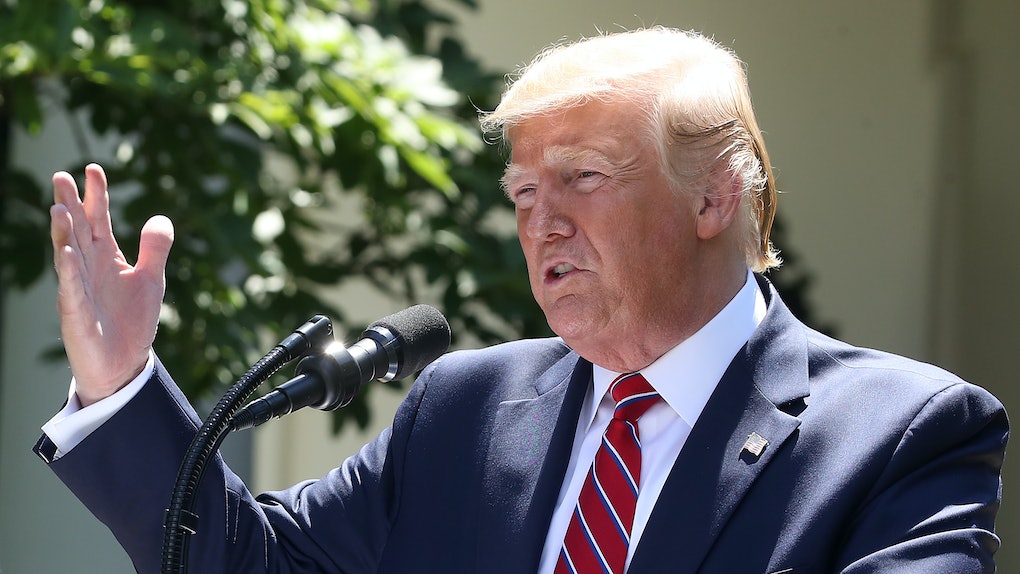 Donald Trump Liked A Tweet From A Rihanna Interview, Which, OK

Let's face it, we all stan Rihanna. However, it looks like the Caribbean singer, dancer, and entrepreneur has fans even in the most unlikely corner. On Monday, June 10, Donald Trump liked a tweet from a Rihanna interview, which is definitely one of the strangest things to happen in 2019 so far. He may have un-liked it by now, but hey rude boy, just give it up — you love Rihanna.

On June 10, writer Heben Nigatu shared an excerpt on Twitter from a feature with Rihanna for Interview Magazine, conducted by actress Sarah Paulson. While we were all excited to read an exclusive with the Fenty founder, people were surprised and puzzled to find out that President Trump had actually liked Nigatu's tweet of the interview. According to Billboard, this is his first like on Twitter since 2017, only having seven (formerly eight) likes on his presidential Twitter account. In addition, Nigatu tweeted that the like occurred at around 12:40 a.m. ET, so perhaps the president was doing some late night Rihanna stalking before bedtime.

There's no telling exactly whether Trump himself liked the tweet, or it was an accident by a staffer (though the president is know for his... personal touch... when it comes to social media, he's not the only one with access to his Twitter account). However, the fact that Trump, or members of his team, might be secret Rihanna fans is too good to ignore. The account later unliked the tweet and it no longer appears under his likes.

In the interview, Rihanna discussed the importance of prioritizing mental health and maintaining a health work and life balance. The excerpt from the interview read,

I never used to be this way. It's only the last couple years that I started to realize that you need to make time for yourself, because your mental health depends on it. If you're not happy, you're not going to be happy even doing things that you love doing. It'd feel like a chore. I never want work to feel like a chore. My career is my purpose, and it should never feel like anything other than a happy place. I've made little things a big deal, like going for a walk or going to the grocery store. I got into a new relationship, and it matters to me. It was like 'I need to make time for this.' Just like I nurture my businesses, I need to nurture this as well. I'll shut things down for two days, three days at a time. On my calendar we now have the infamous 'P,' which means personal days. This is a new thing.

Judging by the context of this interview, perhaps Trump liked the tweet because he found Rihanna's words relatable. After all, being the president of the United States is no easy job, so maybe Trump appreciated Rihanna's statements about a work and life balance (or enjoying a nice walk outside). However, who truly even knows.

At this point, it's clear that Trump enjoys a good Twitter rant a time or two, but this particular social media activity has nearly everyone's eyebrows raised. No matter who liked the tweet, or whether it was intentional or an accident, Rihanna is a woman who has earned her RihannaNavy fan base.

I don't know about y'all, but I'll be blasting her music all day today.