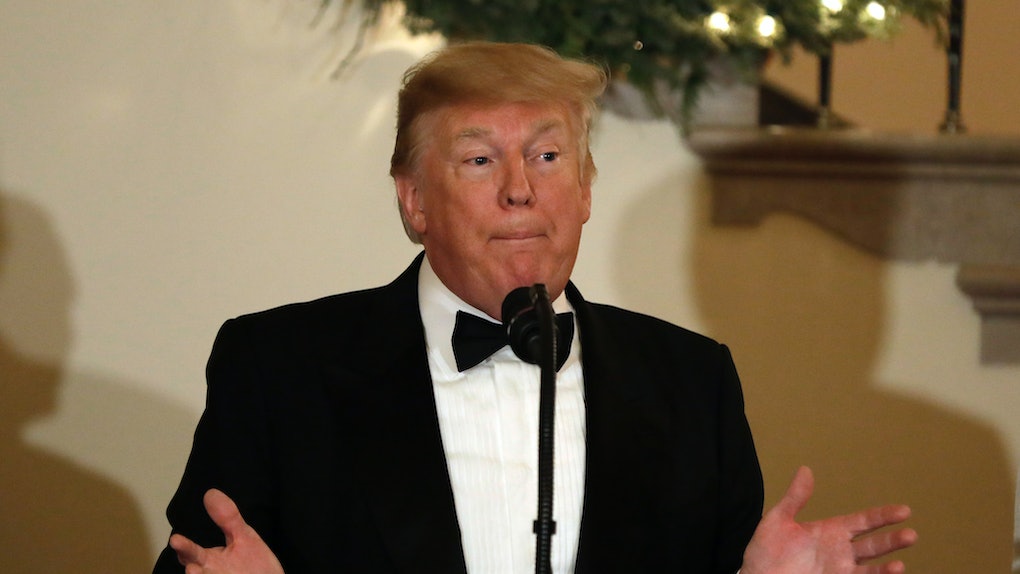 Donald Trump Hates Christmas Parties Because They’re “Not About Him,” Report Says

While New Year's is the end point, the holiday season is called a season for a reason. Most of December is occupied with a slew of holiday parties and festivities gearing up for the big day. While getting dolled up and hitting the holiday party circuit is a big chunk of what this season is about, President Donald Trump apparently hates Christmas parties, reportedly because they're "not about him."

According to some current and former White House staffers, the president is not a fan of all the shindigs he has to attend during the holiday season, per a Dec. 17 report from Intelligencer. The publication reports that as of Dec. 26, Trump will have attended 21 Christmas parties — which, granted, is a lot for anyone to take on. However, the reason behind the reported disdain might be something else. A person close to the White House reportedly told Intelligencer that Trump doesn't like Christmas parties because they're "not about him." The source reportedly added, "If it were about him, he’d love it. Christmas is not about him." Elite Daily reached out to the White House for further comment on the report, but did not immediately hear back.

While the source's suggestion that Trump doesn't like his Christmas-time obligations because he's not the center of attention is definitely dramatic, it's pretty easy to relate to not wanting to attend a whole month's worth of parties. A mere two parties in December feels like a lot to me, so I can't imagine 21 — which is something a senior White House official apparently touched upon to Intelligencer. "It's just a lot," the source reportedly said. Apparently, the traditional receiving line and photo op can be particularly onerous, too, with the president shaking hands and taking pictures with guests for hours per the report.

Luckily for him, this year the president has one less party to attend. This report about Trump hating Christmas parties comes after news that POTUS decided not to host the annual White House holiday party for members of the press. In an exclusive statement to Fox News on Wednesday, Dec. 13, the White House put the kibosh on the traditional press Christmas party. In a statement shared with Elite Daily, a White House spokesperson said that the media holiday party was "not put on the holiday schedule this year," but members of the press who wanted to see the White House holiday decorations were accommodated via an open house tour.

While it's not that surprising that Trump might not like to be beholden to all the obligatory Christmas events, it's less surprising that he didn't want to sip eggnog and sing carols with the press given his ongoing war with the "Fake News Media." During last year's event, Trump and Melania only made a very brief appearance, and in the two years he's been in the Oval Office, Trump hasn't attended either of the White House Correspondents' dinners that celebrate the press (and traditionally feature a roast of the president and their administration). He's also tweeted about "fake news" 343 times over the course of his presidency, according to the Trump Twitter Archive. Basically, his battle with the press doesn't seem to pause for the holidays.

While it's possible Trump cancelled the press party because he's not the media's biggest fan, perhaps this new report shines a different light. Maybe in the end, he really just wanted one less party to go to this season.

More like this
Why Don't I Have TikTok's "Celebrity" Shapeshifting Filter? It Depends On This 1 Thing
By Lara Walsh
These White Claw Surge 8% Hard Seltzer Flavors Sound Super Refreshing
By Lara Walsh
Skateboarder Brighton Zeuner Never Thought She Could End Up At The Olympics
By Rhyma Castillo
Stay up to date