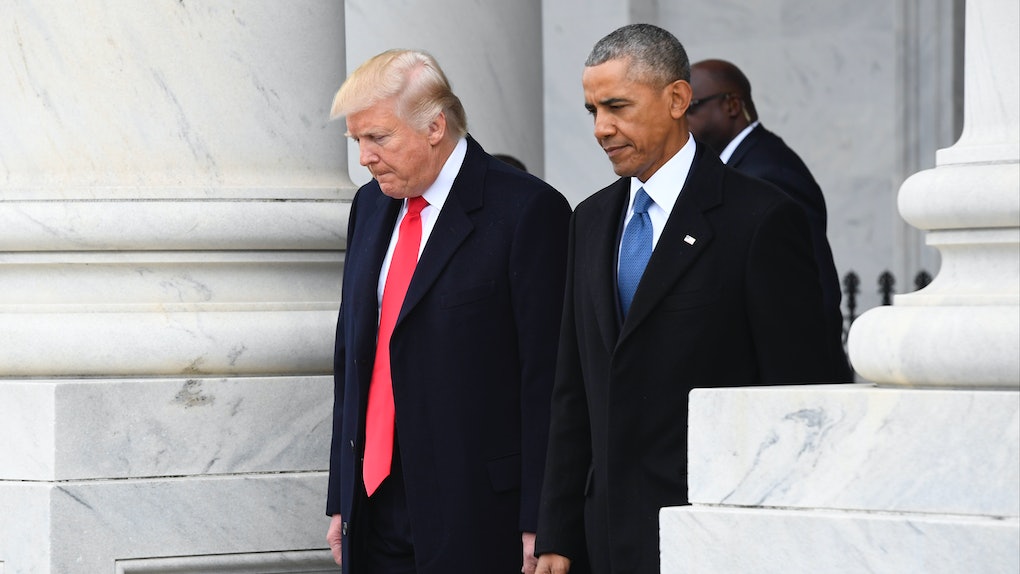 Donald Trump's involvement with Russian President Vladimir Putin might be the most controversial bromance in political history. Well, in a surprising turn of events, Donald Trump called Barack Obama a "patsy" for his Russia policies during an interview on July 19. Hm, seems like someone might be focusing in the wrong direction.

On Thursday, July 19, Donald Trump spoke to CNBC about his dynamic with Putin, and how he's dealt with the United States' relationship with Russia during his presidency. In the interview, Trump told CNBC that he's been "far tougher" on Russia than any president in history. That comment might already raise some eyebrows, but Trump then decided to take it up a notch by claiming that Barack Obama was a "patsy" for Russia during his terms. "Obama was a patsy for Russia," Trump told CNBC. "A total patsy."

In addition to throwing some major shade at former president Barack Obama, Donald Trump continued to pat himself on the back for all he's apparently done in terms of improving relations with Russia. In particular, Trump pointed out that having a good relationship with another world leader shouldn't necessarily be considered a bad thing. However, in classic Trump fashion, he had to throw a subtle threat in there as well.

Trump's claim that Obama was a "patsy" for Russia is questionable for a number of reasons. First, Obama imposed sanctions on Russia when he signed the Magnitsky Act into law in 2012. Then, Obama imposed further sanctions against Russia in December 2016 once the U.S. intelligence agencies found proof that Russia had meddled with the 2016 presidential election, leading Obama to also expel 35 Russian diplomats from the U.S.

This isn't to say that Trump hasn't imposed sanctions on Russia as well for cyber attacks and election interference, but there's no denying that he's defended Russia's actions kind of extensively. On July 16, Putin and Trump met in Helsinki, Finland for a historic summit, and naturally the most hot button question involved Russia's meddling in the 2016 presidential election. Putin persistently denied any meddling from Russian intelligence officers by saying "The Russian state has never interfered and is not going to interfere into internal American affairs, including election processes." Despite the fact U.S. intelligence agencies found that Russia meddling in the 2016 presidential is valid, Trump implied during the Helsinki summit that he believes Putin's claim.

"President Putin just said it's not Russia," Trump told a reporter, "I don't see any reason why it would be."

It's clear that Obama and Trump are two very different presidents, so naturally their relationships with other world leaders would be different. On July 17, Elite Daily spoke with body language experts Patti Wood and Traci Brown to discuss the difference between Obama and Trump's separate meetings with Putin, and apparently one handshake can say so much. According to experts, Trump's interaction with Putin clearly shows that he seeks Putin's approval, while Obama didn't stress as much about being in the Russian leader's good books.

Politics may not be a popularity contest all the time, but in this case it looks like Trump is preferred by Putin.