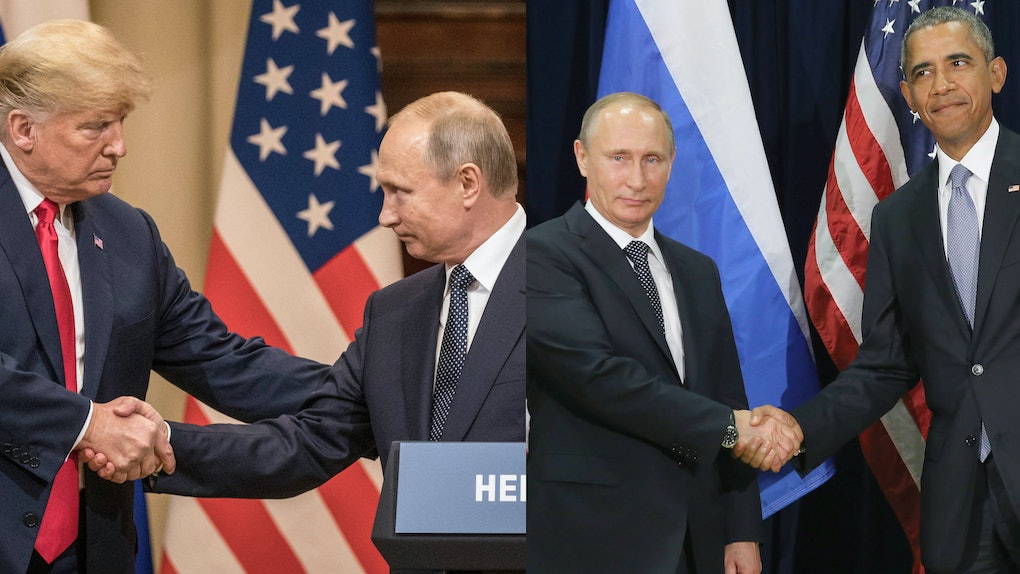 Putin's Handshake With Trump Vs. Obama Says So Much, Body Language Experts Say

On Monday, July 16, President Donald Trump and Russian President Vladimir Putin met in a private one-on-one meeting in Helsinki, Finland. While the world closely watched the whole affair, particularly the jaw-dropping press conference that followed, the subtleties of the leaders' interactions offered key insights into their dynamic, especially in comparison with Putin's dynamic with President Barack Obama. According to body language experts, Putin's handshake with Trump compared with Obama is incredibly revealing.

I spoke with body language experts Patti Wood and Traci Brown about the differences between both American presidents' interactions with the Russian leader.

First off, Trump and Putin's entry into the room itself was noteworthy. "Trump, even when he's in another country, likes to go first," Wood tells me in an interview for Elite Daily. "Even last week — he stepped and walked in front of the queen. The fact that this was not Putin's house or capital, and yet he looked to Putin and Putin went first by several steps into the space [is revealing]."

As for how the men are positioned sitting down, both experts notice Trump is seated on the edge of his seat, apparently indicating an eagerness to impress, show attentiveness, and gain approval. Putin, by contrast, is slouched back and away from Trump, which could express an ease and lack of attention or respect that might come with having the upper hand. The difference between the two, Wood says, is "stunning."

Wood notes that Trump is constantly fidgeting, something she says indicates anxiety. "It's beyond listening to the translator," she says. "That frenetic movement shows accommodation to Putin."

But the handshake is really the most revealing part of their interaction, the experts say. With other world leaders, the experts note, Trump tends to employ aggressive tactics — from yanking to see-sawing to flipping his hand to be on top halfway through — to show his dominance.

Here, with Putin, he doesn't appear to.

"Trump likes to be alpha in every handshake," Wood says. "It's leverage; it's a game to make the other person know he's alpha and he's in charge, and he enjoys the game of it."

It's clearly very, very important to him that Putin gets what he wants.

Brown echoed the analysis that Trump's handshake with Putin is different from his handshakes with other world leaders. And the possible reasons underlying that difference are telling. "[Putin]'s got Trump chasing him," and seeking his approval, Brown claims. "We don't know why — there's something behind the scenes. It's clear there’s something. There's no reason to go after the approval of an adversary so hard unless something's going on."

"Why [Trump's] doing this with only one guy, we don't know yet," Brown says. "But it's clearly very, very important to him that Putin gets what he wants."

The same handshake dynamic also happened during Trump and Putin's first official meeting as world leaders in 2017. Here, Trump offered his hand in the palm-up position, which both experts say indicate hospitality, deference, subservience, or an inferior status.

Another big tell is Trump's facial expression while all this is happening. Usually, his expression during a handshake, Woods says, reflects his enjoyment of dominating the interaction. But with Putin in Helsinki, Trump actually appeared to grimace, while Putin seemed comfortable and relaxed.

As for Obama, the experts agree that he and Putin have an entirely different dynamic, as the video below shows.

Whereas Trump gives a "subservient" handshake, Wood says Obama employs what she calls an "equitable" one, with his fingers and thumb up. In other words, per her analysis, there is no alpha in the Obama-Putin dynamic because they approach it as equals.

Brown agrees, noting the up-and-down pumping motion of their shake. "It looks to me like Obama is the one doing that," she says. "He's leading the handshake."

In fact, Obama doesn't appear to seek Putin's approval nearly as much as Trump does, she claims. "Trump much more intensely wants that connection with Putin."

In the video below at the United Nations greeting, Obama's body language again apparently reveals he's not making any concessions. "As Obama goes in to shake Putin's hand, he spreads his fingers out wide," Wood explains, "and the front of his body, all his body windows, are exposed." (She explains that openly facing someone like this in a handshake has ritualistic significance, showing another leader that you don't have weapons on you and that you're trusting they don't, either.)

"If you look at those facial expressions," Wood adds, "Putin is not smiling and Obama has a downward look of displeasure." In other words, he's not upset, but he's certainly not elated, either.

During a rare moment at the G20 Summit in 2012, below, Putin leans in to say something to Obama and makes him laugh. Wood notices that Obama remains "diplomatic, relaxed, in control of himself and not anxious."

"He abbreviates the moment," Wood says. "He brings his arm out to touch Putin's back. ... If it lingered, it would be affection. But it's a quick power move on Obama's part to show his power and control."

Wood's seems to sum up what might have gone beyond everyone's notice amidst all the hubbub Monday. Overall all, there was a "pretty significant difference" between how Trump and Obama behaved around Putin. As to why, that remains a mystery.