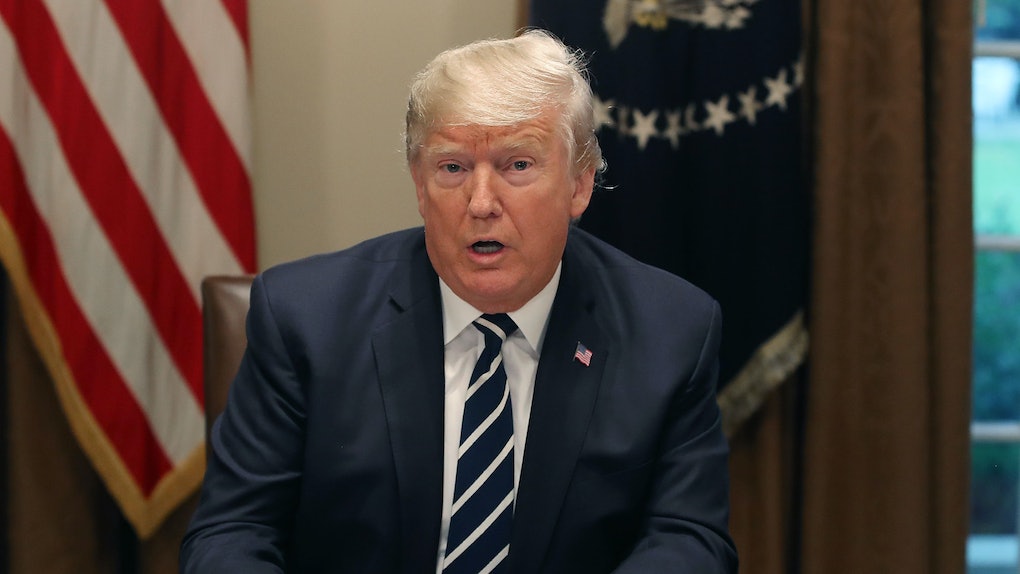 Following a widely criticized joint press conference with Russian president Vladimir Putin in Helsinki, Finland on July 16, President Donald Trump had to backtrack on statements he made where he said there's "no reason" for him to believe Russia interfered with the 2016 presidential election. In an effort at damage control, the president tried to clarify his statements on July 17 and said he has "full confidence" in the U.S. intelligence community's findings — which makes Donald Trump's "no collusion" note about his meeting with Putin so incredibly ironic. At least it's on brand?

The issue of Russian meddling in the 2016 elections was one of the most asked about topics in that press conference. Putin repeatedly denied any meddling, saying, "The Russian state has never interfered and is not going to interfere into internal American affairs, including election processes."

A reporter asked if Trump believes Putin's claims, and Trump effectively said that he does. "President Putin just said it's not Russia," Trump stated, "I don't see any reason why it would be." Trump said this despite the fact that the U.S. intelligence community has come to the consensus that the Russian government in fact did interfere with the election's outcome, so Trump's comments basically undermined this already-established conclusion by his own government.

The backlash in Washington D.C. following these remarks from Trump was pretty major — so much so that according to a report from NBC News, both Vice President Mike Pence and Secretary of State Mike Pompeo urged Trump to "make clarifications" on the statements he made in Helsinki. Trump did so at the White House on July 17 where he read from a pre-written statement — but Trump apparently couldn't help but annotate the statement himself before speaking to the press.

Trump scribbled some notes of his own on the statement in thick black marker, clearly visible in press images from the conference.

And here, we have a closer look.

One New York Times photojournalist took the liberty of flipping one of the images of Trump's remarks so that's it's legible to the viewer, and managed to make out that one of the notes reads "THERE WAS NO COLUSION." (With the word "collusion" notably misspelled, by the way.)

If one were to write up a list of Trump's top presidential phrases, "no collusion" would definitely be at the top. He's been asserting that there is "no collusion" between his campaign and the Kremlin since the investigation first began ramping up following Trump's inauguration in January 2017. So it's not that surprising to learn that he's inserted this phrase yet again.

But I mean, it could have been a little subtler than all-caps in black Sharpie. You can read it through the paper! Twitter had some thoughts, as Twitter does.

But the "colusion" comment wasn't the only edit Trump made. According to the Washington Post, upon zooming on that same image of Trump's statement, it also appeared that the president struck an entire line that stated that the United States would bring "anyone involved in that meddling to justice." That's not reassuring.

The timing of Trump's July 16 summit with Putin was awkward, to say the least. On July 13, 12 Russian nationals were indicted as a part of special counsel Robert Mueller's investigation into Russian meddling into the 2016 presidential election and possible collusion between Russia and the Trump campaign. Charges in the indictment included hacking into the emails of Democratic National Committee (DNC) members in order to interfere in the 2016 election — so it might have been a good idea for Trump to leave that line in.

Unfortunately, it might be a while before the world hears a straightforward answer from this president on the issue of Russian election meddling. We'll all be anxiously waiting for that day to come.