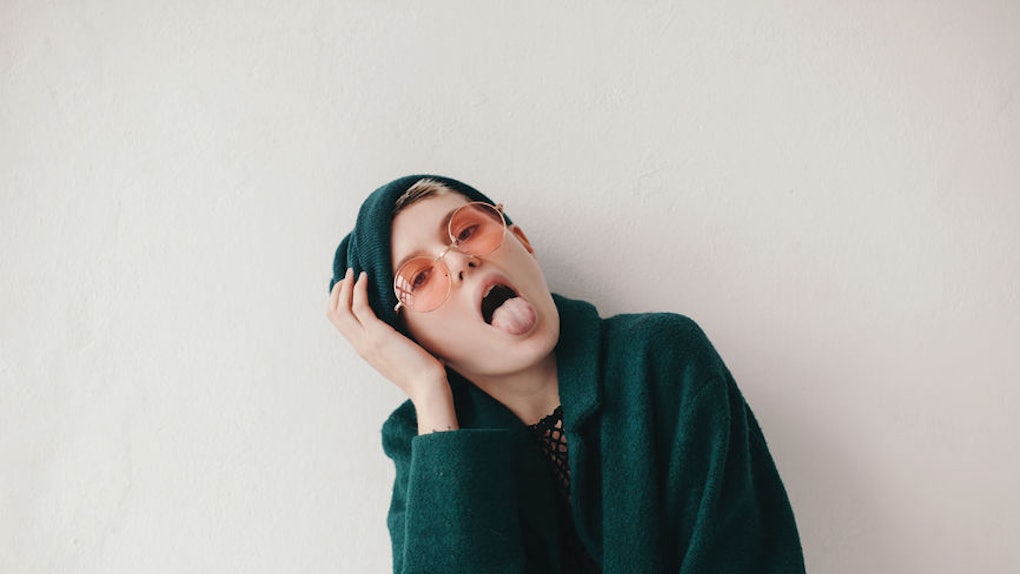 Does The Keto Diet Make You Bloated? Here's Why This Annoying Side Effect Can Happen

Whenever you try out a new way of eating, you'll probably have to make some gradual adjustments to ease your body into the change, and the keto diet is no exception: While following the diet will allow you to indulge in creamy cheeses and fulfill all of your peanut butter-inspired desires, you may notice some pesky side effects as well. For instance, the keto diet can make you bloated, not to mention a bit gassy, too. The good news is, this side effect shouldn't last too long, and with a few useful tips for soothing your digestive system, you should be able to get back to feeling your best in no time.

If you need a quick refresher, the keto diet is basically a low-carb, high-fat way of eating, and by eliminating most carbs from your diet, your body then has to find its energy sources in the healthy fats and protein that you're eating instead of the carbs. And when it comes to bloating on the keto diet, Chinese and integrative medicine expert Dr. Elizabeth Trattner says the issue can usually be traced back to what she calls one of the hardest challenges of the diet in general: eating enough green, leafy veggies with low carbs. "Green veggies keep things moving and grooving," she tells Elite Daily over email. Because the keto diet requires that you eat as few carbs as possible, Trattner says it's often difficult for people to eat an abundance of fruits and veggies — but those are the foods that'll ensure you're not uncomfortably bloated and backed up.

But here's where things can get really tricky. See, if you're new to the keto diet, I'm going to guess you've probably never been this conscious of your carb intake up until now, meaning you may have a hard time picturing how many grams of carbs are in everyday foods. Of course, bread is known for being carb heaven, but surprisingly enough, a lot of fruits are more carb-heavy than you might think. “The keto diet is a calorie-reduced diet plan that focuses on eating most of your calories from fat, a moderate amount of protein, and only 20 or so grams of carbs per day—that’s about the amount in one apple,” Julie Upton, RD, a registered dietitian and co-founder of Appetite for Health, told Women's Health back in February. So even though the keto diet definitely has a focus on eating plenty of fresh produce, it can be tough to figure out exactly how much of each food you should be eating, not to mention how to steer clear of bloating at the same time.

To that point, while Trattner says green, leafy vegetables can help to move things along in your digestive system, other veggies could be making things worse for you stomach, according to Monica Auslander Moreno, MS, RD, LD/N, a nutrition consultant for RSP Nutrition. If you're trying to steer clear of bloating on the keto diet, Moreno tells Elite Daily over email that it's best to avoid or only eat small amounts of Brussels sprouts, broccoli, cabbage, mushrooms, onions, eggplant, garlic, leeks, and chives. As for foods that are a bit kinder to your digestive system, be sure to put lentils, rhubarb, pears, artichokes, and figs on your next grocery list.

Aside from the fruits and veggies situation, another aspect of the keto diet that could be contributing to your bloating or constipation is a low fiber intake. Having to wave goodbye to whole grains like quinoa, whole wheat pasta, and gluten of all delicious varieties might slow things down in your digestive tract, so be sure to stock up on foods like berries, avocados, nuts, and olives for keto-friendly sources of fiber.

So, if you want to stick to the keto diet's guidelines and reduce bloating naturally, Trattner recommends starting with a couple of digestive herb drinks, such as ginger and warm water with lemon juice, or even a hot peppermint tea. Fennel tea or bitters in water can also naturally help with bloating, she says. If you aren't a huge tea fan, though, no worries — you can still get some nutritious herbs in by eating them fresh, rather than steeped. "Herb mix lettuce helps as well [with bloating]," Trattner tells Elite Daily.

Even with these useful tips under your belt (pun entirely intended), if you find that nothing is helping to relieve your bloating, Trattner says it's definitely best to check in with your doctor to figure out what's really going on. "If you’re bloated after a few weeks, it's time to see your doctor or health care professional," she says. Another important thing to watch out for here, Trattner adds, is how often you're pooping. If you aren't having at least one bowel movement every two days, she explains, you might need to check in with your doctor.

Another potential bloating remedy could be found in keto-approved, naturally probiotic foods. Trattner suggests trying kimchi, miso paste (in smaller amounts), sauerkraut, and perhaps a bit of kefir for digestive health. And if you don't want to have to worry about whether you're getting enough probiotics through your food, she recommends trying a probiotic supplement such as Bio-Kult. Since the capsules generally don't have many carbs, they should be totally keto-friendly, she says.

As with any changes to your eating habits, give your body a little time to adjust. But, if you still aren't feeling your best after a while, check in with your doctor to figure out how you can keep things running smoothly.

This article was originally published on Aug. 28, 2018