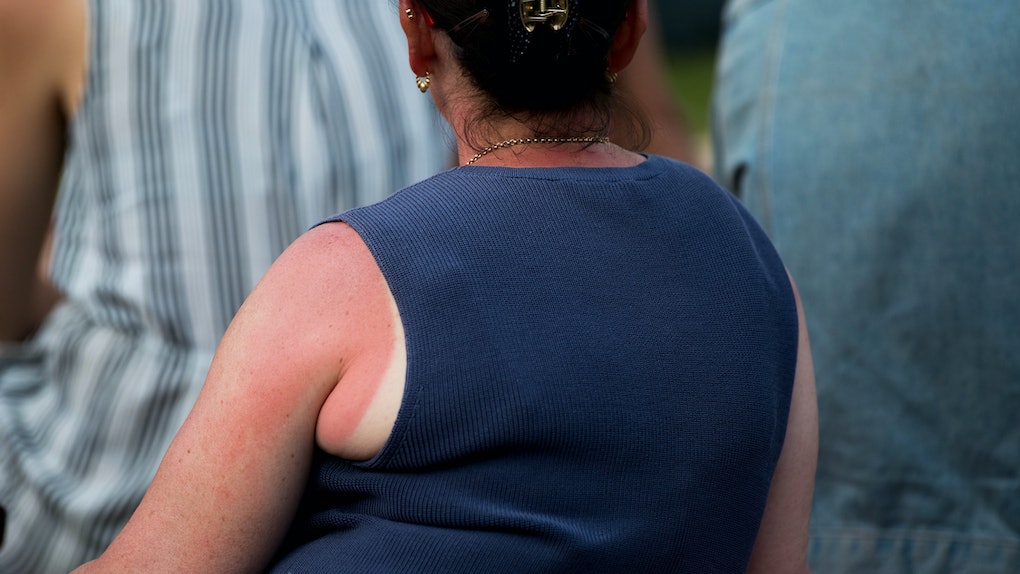 Does Shaving Cream Help Sunburn? One Woman's DIY Hack For Her Burn Has People Talking

Summer is hands down my favorite season. The sun comes up early and sets late, there's no need to put on a million layers before going outside, and it's another excuse to eat ice cream outside. But one thing about the warmer months that we can't avoid is dreaded sunburn. But what if there was a way to get rid of sunburn almost instantly? Apparently there may be, at least according to Facebook user Cindi Allen-Stewart. And the product she uses for her hack may actually be something that's already stocked in your bathroom cabinet. So, does shaving cream help sunburn?

Believe it or not, in a now-viral Facebook post, Allen-Stewart said she swears by Gillette Foamy Menthol. (But she also mentions that it doesn't have to be that brand specifically — it just has to be foaming and contain menthol). Yes, I know this choice may sound a bit outlandish to some, and you're probably asking yourself how this even works. According to Allen-Stewart, this method "takes the heat out of it fast," which doesn't sound too far off, seeing as menthol has a cooling effect on the skin.

To use, Allen-Stewart suggests applying the shaving cream to the affected area. Then, without rubbing it in, let the product simply sit on top of the skin. After about half an hour, once the shaving cream starts to dry, go into the shower to rinse it off using lukewarm water. Then, she said you should feel instant relief. She also said you can use it the next day as well, and after that, the sunburn should disappear. Of course, Allen-Stewart emphasizes that this works for her, but it may not work for everyone.

Now, you're probably thinking, "OK, who can confirm that this actually works?" Well, I went straight to the experts.

"As an anti-inflammatory, menthol may be useful in calming sunburned skin," confirms Dr. Joshua Zeichner, Director of Cosmetic and Clinical Research at Mount Sinai Hospital in New York City. "While a menthol-containing shaving gel may be useful in treating mild sunburns, I personally would recommend traditional post sun skin care cream as first-line treatment."

Dr. Zeichner continues that you definitely shouldn't let the shaving cream sit on your skin for a super long period of time, if you choose to try this method. "If you start develop significant burning or stinging, you should remove the shave gel, as it may mean you were developing an allergy or an irritation from it," he says.

Dr. Sarika Banker, a dermatologist based in Jericho, New York, shared similar thoughts with New Beauty, but also warned that not all sunburns should be treated solely at home.

"Menthol can be soothing by making the skin feel cooler and reducing the sting of a sunburn, but it wouldn’t really impact the redness much," Dr. Banker said. "I usually recommend cool compresses and hydrocortisone one percent two to three times per day for a few days until redness has subsided. For blistering sunburns, you should see a dermatologist as you may need additional treatment to avoid infection."

Also, if for whatever reason you're unable to use shaving cream method, Elite Daily has reported in the past that coconut oil may help to reduce inflammation caused by sunburn. However, it's not suggested as the only remedy you should use, and it's recommended that you apply a cold compress to the area prior to any oil or lotion application.

Regardless of what you use once you've gotten a sunburn, the best way to go when it comes to skincare in the summer is to prevent overexposure to the sun in the first place. In other words, make sure to apply your sunscreen, people! There are tons of options available right now, so you won't have to worry about clogged pores or chalky residue. And if you're into glitter this year, there's a product for that, too! So make sure to slap some on before heading out in the sun.