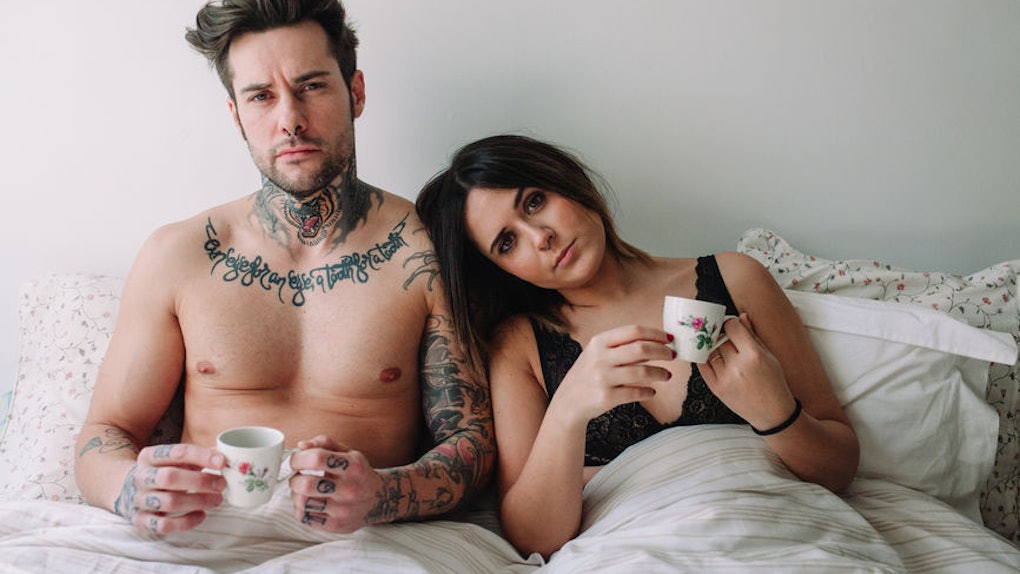 Does Sex Get Better When You're Married? A New Study On Orgasms Finds Depressing Results

As a single, unmarried 25-year-old "child" of divorced parents, I don't know a whole lot about marriage. I don't know how often married people talk to each other, I don't know what they talk about, and I definitely don't know anything about how much sex they have. All the time? Never? I have no idea! It could go either way. Bu, for those of you wondering if sex gets better when you're married, the answer seems to, unfortunately, be no.

It's sad, I know. And, unfortunately, there's science to back up the heart-wrenching truth.

Researchers at Brigham Young University examined data they collected from 1,683 newly married straight couples. As part of the questionnaire, they were asked to reveal how often they orgasm, how often they believed their partner orgasms and how satisfied they are with their sex life and with their relationship, overall. They published their findings in a study called "The Significance of the Female Orgasm: A Nationally Representative, Dyadic Study of Newlyweds' Orgasm Experience."

The results revealed that less than half of married women (49 percent!) said they usually orgasm during sex. This may not seem like that small of a portion but when compared to the 87 percent of married men who say the same, it's easy to realize how huge this disparity really is.

And that's not all. Apparently, a fair amount of dudes had no clue that their wives weren't orgasming. Almost half of them (43 percent) "misperceived how often their wives experienced orgasm." The Guardian reports that, in addition to that, a quarter of them weren't completely off base but they did believe their wives were orgasming more frequently than they actually were.

While the study itself provides us with brand new information, the actual problem isn't new (unfortunately). The orgasm gap has been around for a long time. For those of you who are unfamiliar with the concept, the orgasm gap refers to the disparity between how often men and women reach climax. Women in heterosexual relationships tend to orgasm far less frequently than their male partners. By that same token, not all men are quite in tune with how their female partners experience the most sexual pleasure.

How do we fix this problem? Well, for starters, we can all get better about communicating. Women, don't be afraid to be honest with your partner if you didn't come! Lying isn't getting you anywhere. Men, on the other hand, really need to step up their game. Women, be vocal about what you want in bed and, men, it's time to be vigilant (yes, vigilant) about giving it to her.