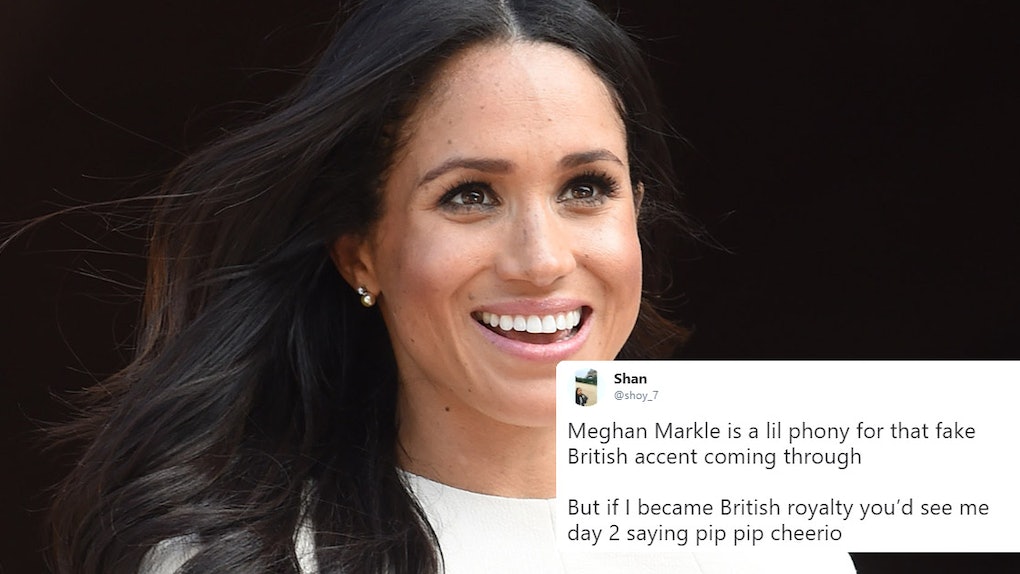 Does Meghan Markle Have A British Accent? This Video Has Fans Convinced She Does & It's Cute

The Duchess of Sussex just pulled a Madonna, you guys, and I really don't know what to think about it! The Los Angeles-born former actress seems to be speaking a little differently these days, and you could totally hear it when she stopped to talk to supporters during her first solo outing with Queen Elizabeth in June, about a month after her royal wedding to Prince Harry, Duke of Sussex. So now I really need to know — Does Meghan Markle have a British accent? Because, um, it definitely seems like she does!

In a video posted on Twitter on June 14 by a fan named Aya, Meghan smiled as she shook hands with her fans decked out in a gorgeous Givenchy sheath dress. She even asked some of them for their names. Then she stopped to chat with a woman named Sara, who told her she looked gorgeous on her wedding day.

"Oh, thank you, that's so nice of you to say," Meghan said. "We all had a great day, I think. The sun was shining for us. Very lucky all around. Like today, almost."

Now, go back and read that whole paragraph again, only this time, do it with a slight British accent — kind of like the one Lindsey Lohan busts out on occasion — and you'll sound just like Meghan sounds now! And if you don't believe me, I'll give you a minute to go watch this video over on Twitter.

See what I mean? All that's missing is a spot of tea and some crumpets.

According to The London Times, the queen's senior palace adviser, Samantha Cohen, had been tasked with teaching Meghan Markle everything about royal life in the months leading up to the wedding, and apparently those lessons included stuff like accent and tone, and learning to use more British words. So I guess it's not all that surprising that the Duchess now sounds more like a true Brit.

TBH, at first I thought the faux accent was straight-up weird. But the more I watch that clip, the more I'm actually into it. I mean, for one thing, Meghan sounds kinda fancy and I can't say I hate it. She's a royal now, after all! And for another, she had to give up her role on Suits when she married Prince Harry, so at least she's getting to use those acting chops somewhere if it is a fake accent.

I'm gonna go ahead and say the whole thing is actually quite brilliant. And yes, I just typed that with a British accent in my head. What can I say, it's catchy!

Meanwhile, Meghan's fans on Twitter aren't quite sure what to make of it.

I support Meghan's right to choose whatever accent she wants, too. But some fans insist it wasn't a choice Meghan made, but rather a perfectly natural side-effect to being exposed to British accents for an extended period of time.

Fake or authentic, I can't help but wonder what Prince Harry thinks. Like, don't you think one of the things he probably liked about Meghan was the fact that she was American? And now, she's, like, turning into his grandmother?

Then again, I could also see him sitting at home and helping his new wife practice her affectation over their famous roast chicken or something. And that is just so, so cute and now I'm insanely jealous over this totally made-up scenario, aren't you?

Meanwhile, Madonna, Meghan, and LiLo aren't the only actresses who've co-opted Brit-speak. Elizabeth Banks has admitted to getting her proper English lilt on after watching Downton Abbey.

And Gwenyth Paltrow has taken the affectation out for a test drive, too. Check out this opening monologue from her guest appearance on Saturday Night Live back in 1999, where she made fun of herself for doing just that.

And yes, that's a pre-famous Tina Fey coming in at the 1:23 mark. Oh, and Ben Affleck is there, too, fresh off the couple's breakup.