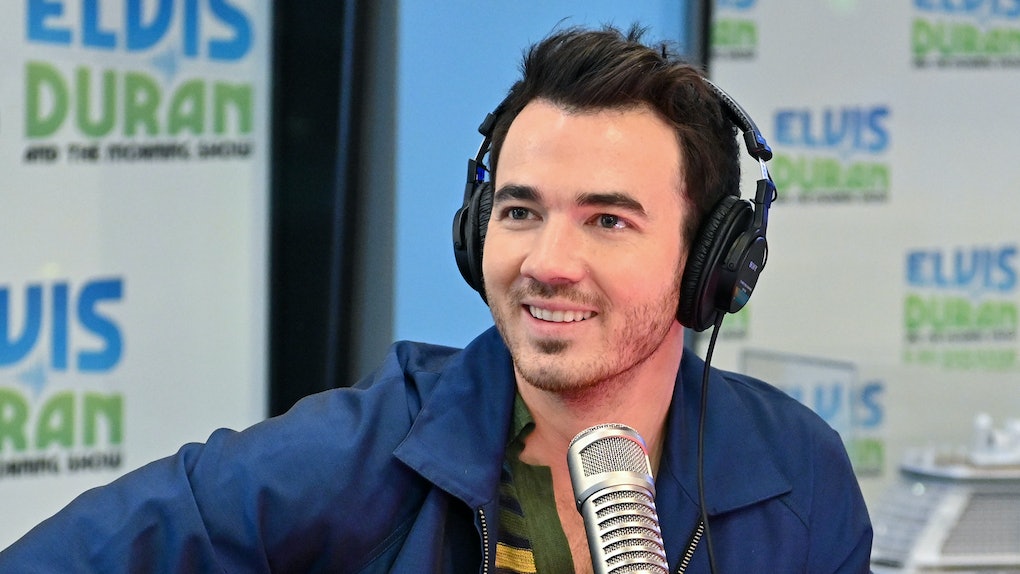 Does Kevin Jonas Sing? Fans Are Convinced He Has A Solo On This 'Happiness Begins' Track

The Jonas Brothers have gifted fans with a new album, but a question from their early music days still remains: Does Kevin Jonas sing? It's a tale as old as time. A tune as old as song... that Kevin Jonas didn't sing. But probably helped write! Following the release of the group's new album, there's one song on Happiness Begins that has fans kind of freaking out. They swear they hear Kevin singing the bridge of the song "Hesitate," a track Joe Jonas wrote for Sophie Turner. Huge if true, people! But does Kevin Jonas sing on any of the songs on Happiness Begins?

Kevin, Nick, and Joe Jonas' group structure has always been Joe and Nick as lead singers and Nick and Kevin on guitar. Kevin's singing voice is barely ever heard — the small moments coming when he's harmonizing with Joe and Nick. But fans are pretty divided on whether it's really Kevin singing on "Hesitate." The main Kevin attraction has always his guitar playing (never forget when he'd play the guitar while doing flips on a trampoline on their old tours), so the idea of having a Kevin solo on the album has fans shook and happily surprised.

Some have theorized over the years that Kevin doesn't sing on the songs because he can't sing.

If Kevin Jonas can't sing... then explain this.

He left his heart in Scandinavia, and he left your jaws dropped.

That video from the old Disney Channel show Jonas proves Kevin can, in fact, sing. And he can sing well. He's never explained why he opts not to sing in most of the Jonas Brothers music, however, leaving people always questioning why he doesn't. It could be that he just prefers the guitar and songwriting.

Fans are pretty convinced Kevin can be heard doing a rare solo on "Hesitate."

You can listen to the track here.

The "Hesitate" bridge comes in around the 2:15 mark in the song. The lyrics go,

As the "I Left My Heart In Scandinavia" video shows, Kevin's voice sounds like a perfect mix of Joe and Nick's voices. That's why it sounds like it could be Joe singing the bridge. Nick's voice is easier to distinguish in this song.

After the supposed Kevin solo happens, Joe repeats the same line. The voices sound different enough to argue both sides of this debate, however. The first line is sung in a more subdued, gentle voice, then the repeated lines are sung an octave higher and it's more of a belt. It's unmistakably Joe the second time around, but I see how fans could think it's Kevin singing first.

The JoBros haven't confirmed whether or not it is Kevin on the track, but I'm tellin' ya, if he wanted to sing, he could rock it.

And it's not like he hasn't sung solos during their concerts before.

Kevin, please. The fandom is begging. Sing for us, angel of music!

Fingers crossed that Kevin sings on the Happiness Begins tour.