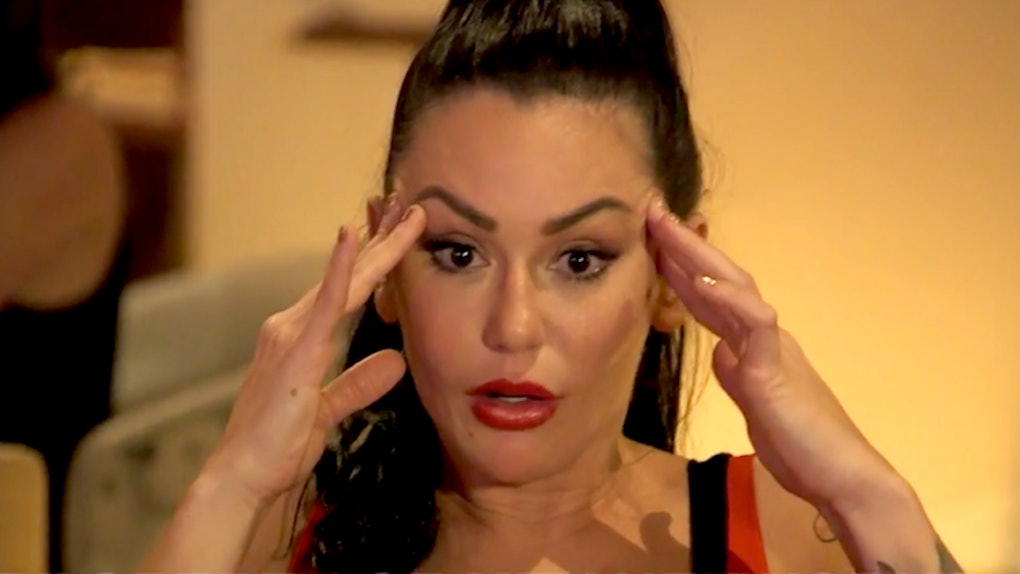 Does Jenni Leave 'Family Vacation' For Good? Fans Are Worried She Won't Return

We are only five episodes deep into the second season of Jersey Shore Family Vacation, but it already looks like one of the roommates is heading for the door. Thursday night's latest episode was all about JWoww's friction with the returning Angelina, which became so incredibly tense that it ended with Jenni announcing her intention to leave the show. So, does Jenni leave Jersey Shore Family Vacation for real, or will we see her return later on in the season? Let's work through all the drama from the latest episode.

Understandably, not everyone was overjoyed to hear that Snooki invited controversial former roommate Angelina to Las Vegas for the second season of Jersey Shore Family Vacation, and things finally reached a boiling point in Thursday night's new episode, which was aptly titled "Frenemies." Despite her (admittedly not-exactly-great) attempts to patch things up with JWoww, Angelina only succeeds in irritating her even more. JWoww and Angelina have beef dating back to the early seasons of Jersey Shore back in 2009 and 2010, but more recently, the two reopened their rivalry after Angelina called Jenni a "Jersey whore" on Instagram.

And Angelina's plan to try to be funny to win Jenni back totally backfires. When the group goes out for a classy dinner, Angelina screams and chants for JWoww to show off her boobs, and at the club later that night, she tries to jokingly put an ice cube down JWoww's shirt, which results in JWoww putting Angelina into a headlock.

Obviously... things are not going smoothly. And they only continue getting worse — JWoww's fight with Angelina actually creates a bit of a rift between her and her best friend Snooki, who is suddenly buddy-buddy with Angelina. When Snooki announces that she wants to invite her friend Joey to join the group in Vegas as well, it is the straw that broke the camel's back for JWoww. Jenni reveals she does not feel like this Vegas trip is the family vacation that it was meant to be:

This is a family vacation. This isn't a third-wheel friend vacation, and now I'm a little bitter.

It also did not help that Mike was the only castmate to participate in her Mother's Day video message, which she revealed was an emotional thing for her to learn at the very beginning of the season. In light of all these things, JWoww announced that she would be leaving Vegas to return home at the end of the episode. Of course, Snooki takes this news the hardest and storms away from the dinner table.

So, is this the last of JWoww? Even if she does decide to return home to New Jersey, it does not look like she will be off this season for good. We know that the cast will move from Las Vegas back to their original home of Seaside Heights later in the season, and JWoww has already appeared in footage from when that happens.

Perhaps since that is closer to home, Jenni felt more comfortable returning to her Jersey Shore family where everything all began.