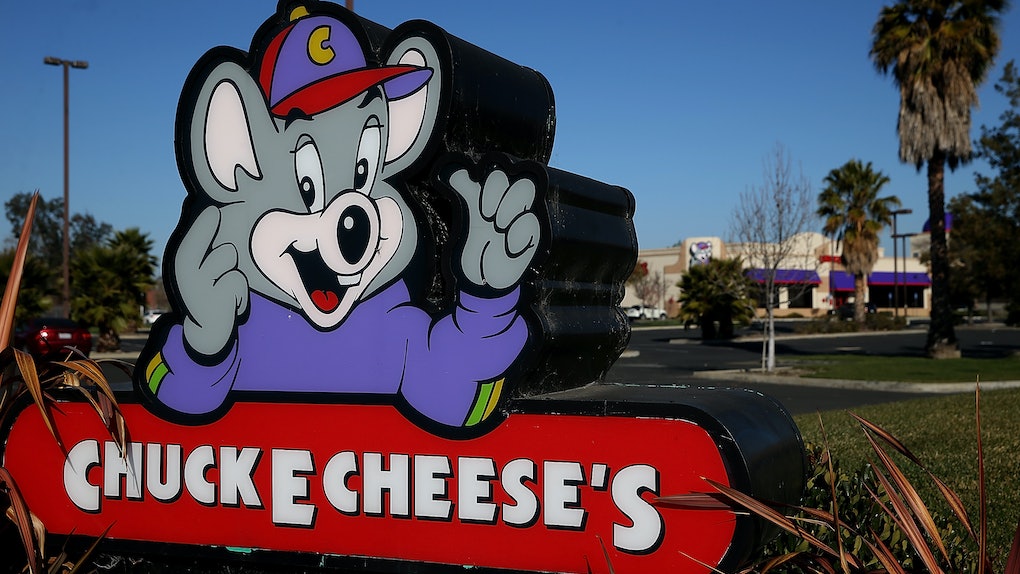 Does Chuck E. Cheese Deliver? You Can Relive Your Childhood Sooner Than You Think

Growing up, some of the most legendary birthday parties of all time took place at Chuck E. Cheese. Between ski ball, Whack-A-Mole, the indoor playground, and of course, Chuck E. himself, there was seriously no better way to throw down... especially when it came time for pizza. And now, us '90s kids can finally relive those glory days, because Chuck E. Cheese will deliver its pizzas to your door, starting this year. Seriously, let's take a moment and praise the pizza party overlords; this is a dairy-loving miracle.

OK, don't get me wrong; grownup parties are fun as hell. But a little slice of childhood between a few rounds of beer pong definitely never hurt nobody. According to Chuck E. Cheese's press release, more than 345 Chuck E. Cheese locations nationwide will now be offering pizza delivery through third-party delivery sites such as Grubhub, UberEATS and DoorDash, depending on your location. Also, it looks like it'll be offering several different kinds of pizza, from Stuffed Crust to Double Pepperoni, and even California Alfredo pies. This is literally the best news I've yet to hear all day, and honestly, I have no clue what any of us did to deserve this.

Wow. All I can say is, "yum." And would you just look at this cheese pull? It's remarkable. My lord.

I can't handle this. It looks almost too delicious. Oh, and guess what? The fun doesn't even stop there. You know how most pizza places will give you a free side of marinara with your order, or even a extra napkins? (Ooooh). Well, upon ordering a pie from Chuck E. Cheese, each customer will receive a free goody bag with their order.

Honestly, 'nuff said, I'm sold. According to the press release, each goody bag will be filled with various prizes, such as puzzles, games, toys, or even stuffed animals, while supplies last. Damn, this deal is so sweet. Does it come with a ball pit too? That's a pivotal part of any trip to Chuck E. Cheese.

In the press release, Ashley Zickefoose, the chief marketing and concept officer at CEC Entertainment, Inc., said that the company is thrilled to offer its pizza to families (and also party-going 20-something-year-olds) in the comfort of their own homes. She seemed to insinuate that the company has a lot planned for 2018, so let's all pray for future ball pit delivery.

We know families love our fresh, never frozen pizza as much as our games. After years of hearing from guests that we should offer a way for families to enjoy our delicious pizzas at home, we're excited to make delivery a reality as part of several game-changing initiatives that we have planned this year.

Shockingly, this isn't the first time the company has offered pizza delivery, but it is the first time it's been offered nationwide. According to the press release, Chuck E. Cheese began testing third-party delivery service in five lucky AF cities at the very end of 2017. These cities included: Dallas, Tampa, Orlando, Miami, and San Francisco, and though I didn't know about their Chuck E. Cheese delivery access back then, I'm still pretty #Salty about it. But, it ended up being super popular, and because of the expanding market for food delivery, the brand decided to extend their delivery services nationally. Yahoo!

Sure, New York City pizza is the best of the best, but now that there's Chuck E. Cheese delivery, I definitely know where all of my money will be going at 3 a.m. on Saturday nights. Not only is this a straight up blessing for families everywhere, but it's a miracle for millennial parties nationwide. I was pretty excited about my plans tonight, but now I'm really just looking forward to seeing what comes in my pizza delivery's goody bag.