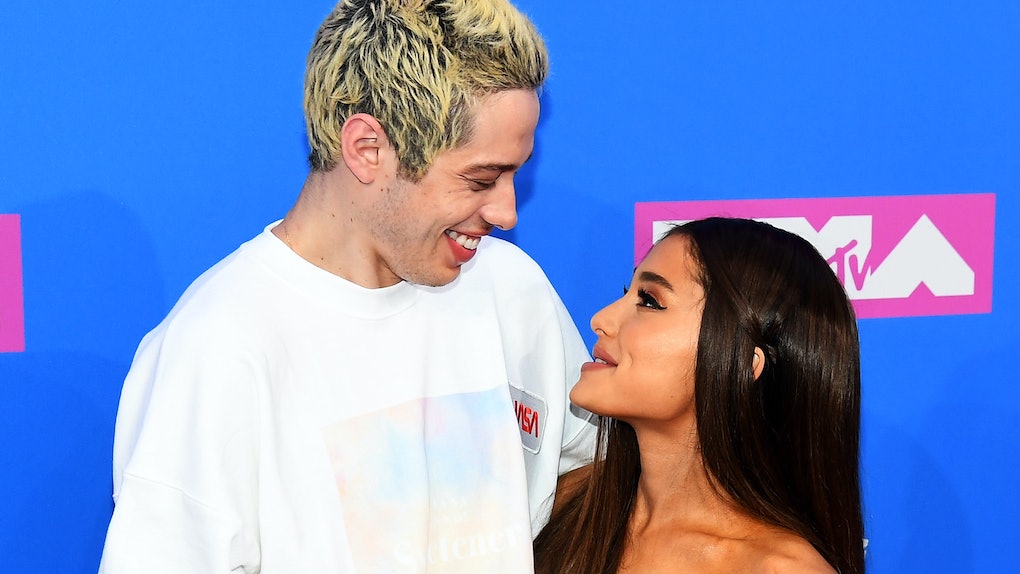 Does Ariana Grande Diss Pete Davidson In "Positions"? She May Take A Shot At All Her Exes

Ariana Grande's "Positions" has finally arrived, marking the singer's first solo release of 2020. Of course, fans have a lot to say about the meaning behind the song. One line in the first verse has especially grabbed their attention, because they think it could reference Grande's ex fiancé, Pete Davidson. So, does Ariana Grande diss Pete Davidson in "Positions"? Let's take a look.

Grande and Davidson's whirlwind romance began in May 2019. After dating for just a few weeks, the couple got engaged in June. They were so head over heels for each other, they even got a few couple tattoos. Not to mention, Grande also named a song after the Saturday Night Live star called "pete davidson," from her Billboard No. 1 album Sweetener, during which she called him her "soulmate." The pair eventually split that October, with many reports saying Grande and Davidson took their relationship too fast.

Since then, Grande has seemingly referenced Davidson in her songs like "ghostin," "bloodline," and "thank u, next." Now, fans are adding "Positions" onto that list because of one line. While most of the track appears to be directed at Grande's current boyfriend, Dalton Gomez, it seems the singer snuck in a nod toward her former relationship as well.

At the beginning of the track, Grande talks about how she's found love again. She's beyond thankful for them, but she hopes the relationship doesn't turn out like her previous ones. "Heaven sent you to me/ I'm just hopin’ I don't repeat history," Grande sings in the intro.

Considering how public her and Davidson were, fans are sure the lyric was about the famous comedian. It's worth mentioning Grande has a few exes and messy breakups she could be referencing with the line as well, but it's hard to ignore the how Grande pronounced "repeat" in the opening line. The singer broke down the word so there was a pause in the middle, meaning fans heard "re" and "peat" separately. It's easy to miss on the first listen, but once you catch it, the line becomes obvious it's sending a message to one ex in particular.

Fans were totally shook after making the realization.

You can hear the line for yourself near the 0:20 mark in the video below.

Although fans are set in thinking the line was about Davidson, there's also the possibility Grande is just taking a dig at all her exes. That's exactly what she did in "thank u, next."

Either way, "Positions" is a banger and that's that.