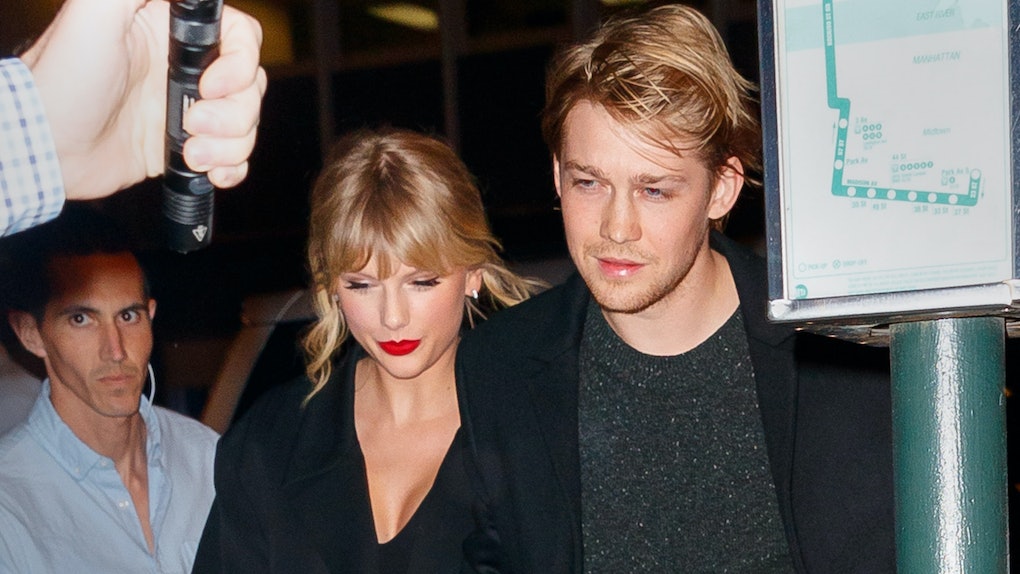 Swifties wasted no time digging into the meaning behind the lyrics on Taylor Swift's surprise album Folklore after it dropped at midnight on Friday, July 24. The record is filled with emotional songs and heartfelt lyrics that have fans wondering: Did Taylor Swift and Joe Alwayn break up? Here's why listeners are confused.

Before we get into all the lyrics that point at some sort of breakup, it's necessary to mention that Swift explained in a note on Instagram that the album is primarily based on her imagination, adding to the confusion. "In isolation my imagination has run wild and this album is the result, a collection of songs and stories that flowed like a stream of consciousness," Swift wrote shortly after the album came out. "Picking up a pen was my way of escaping into fantasy, history, and memory. I’ve told these stories to the best of my ability with all the love, wonder, and whimsy they deserve."

But, this didn't stop fans from speculation there is trouble in paradise for Alwyn and Swift. After listening to a variety of sad songs on Folklore, Swifties aren't sure what to believe.

Take the chill-inducing chorus on Swift's "The 1," in which she sings:

But we were something, don't you think so? / Roaring twenties, tossing pennies in the pool / And if my wishes came true / It would've been you / In my defense, I have none / For never leaving well enough alone / But it would've been fun / If you would've been the one.

The eerie breakup anthem "My Tears Ricochet" also had some deep lyrics. In it, Swift sings,

We gather stones, never knowing what they'll mean / Some to throw, some to make a diamond ring / You know I didn't want to have to haunt you / But what a ghostly scene / You wear the same jewels that I gave you / As you bury me.

And, of course, there's the fan theory that the three songs "Cardigan," "August," and "Betty" tell the story of a sticky love triangle.

Here's what heartbroken fans are saying.

But then giving hope that fans may be overreacting, there's the gorgeous love story told on "Invisible String," which seems to reflect on Swift and Alwyn's storybook romance. In it, she sings,

Bad was the blood of the song in the cab / On your first trip to L.A. / You ate at my favorite spot for dinner / Bold was the waitress on our three-year trip / Getting lunch down by the Lakes / She said I looked like an American singer

For now, fans will have to continue speculating, but considering Swift was pretty straight forward about the album being inspired by "characters" she had dreamt up, it's safe to say all is well in Swift and Alwyn's world.

More like this
What New Music Is Dropping In May 2021? BTS, Olivia Rodrigo, & More Will Heat Up The Summer
By Sydney N. Sweeney
These Tweets Comparing Billie Eilish's 'Happier Than Ever' & Ariana Grande's 'Sweetener' Covers Are A Lot
By Sydney N. Sweeney
Taylor Swift's Best Live Performances Through The Years Are Absolutely Mind-Blowing
By Brandy Robidoux
Stay up to date