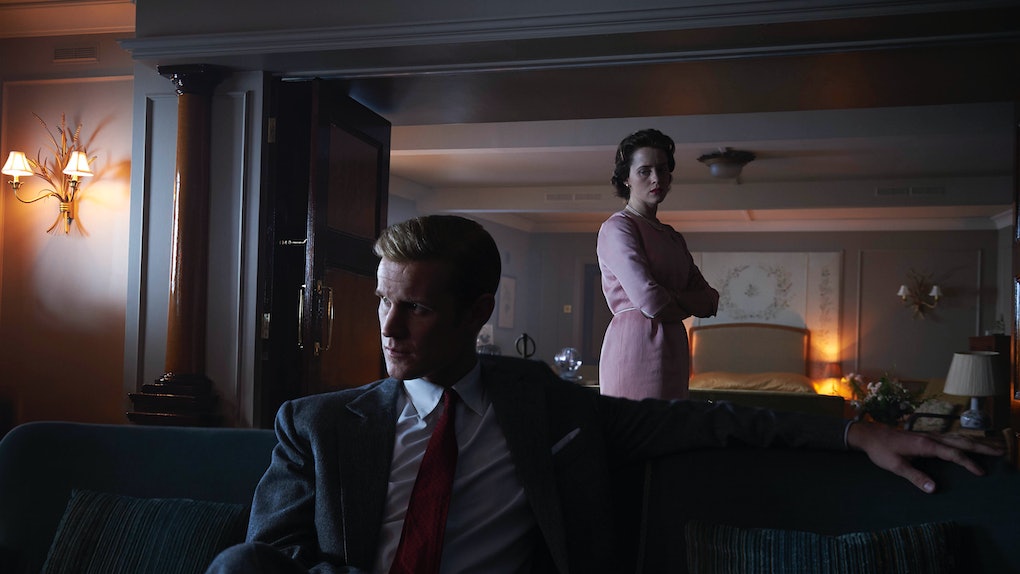 Did Philip Cheat On Elizabeth IRL? ‘The Crown’ Has Fans Searching For Answers

The Crown returns for a second season on Netflix, a fictionalized version of the life and times of the currently reigning monarch of the UK, Queen Elizabeth II. Like last season, each episode takes an event in history and dramatizes how the palace dealt with it and how the Queen responded. But this year the first four episodes have one long arc: Philip's supposed unfaithfulness to her majesty. Did Philip cheat on Elizabeth? Did he really sleep his way across the south seas on his way to Australia? Did he really have an affair with a ballerina? How much of what The Crown suggests about their relationship is true?

With only two weeks until The Crown Season 2's arrival, Philip and Elizabeth are celebrating their 70th wedding anniversary just before American Thanksgiving. This milestone has some newspapers running flattering puff pieces about their near century long love story. Other tabloids, on the other hand, are using this moment in time to pull up all the dirt from their early years and ask: what really happened?

It doesn't help that a new book by "royal watcher" Ingrid Seward is out, reiterating all these rumors, and assuming that at least some of them were true.

Though none of the allegations have been confirmed (and the pair has always denied any marital issues), My Husband and I: The Inside Story of 70 Years of Royal Marriage names a string of both famous women and friends, including stage actress Pat Kirkwood, TV presenter Katie Boyle and Susan Barrantes, the mum of Sarah Ferguson, his son Prince Andrew's former wife.

So is The Crown correct in stating that Philip was unfaithful, and at times flagrantly so, like during his five months at sea?

Here's the thing: We don't know. We may never know. What is certain is though Philip's private secretary, Parker, found himself being sued for divorce from his wife after that five-month-trip, if there was a letter that implicated Philip, the public never saw it. Unlike Parker, what happened in Philip's bed stayed there.

And that's true across the entire 70 years that the Queen and her consort have been married. He may have been unfaithful. But he was smart enough about it, and chose the sort of woman who would be discreet, that for the better part of a century, he and Elizabeth can deny everything, and no one really knows.

The problem for the Palace is that all these claims are plausible, and even if they're not true, they certainly feel as if they could have been true. Men of the upper class and royal privilege have been carrying on affairs with dancers, actresses. Is it really such a stretch to see Philip doing the same with movie stars and TV presenters back in the day?

The Crown never shows Philip having an affair with anyone. And yet, the suggestion is there, and it's an ugly one, far uglier than anything this new book suggests. As Parker's letter states in the series "this is a land where adultery doesn't exist." Those from the UK regarded many of these territories they conquered and ruled to be filled with savages, and peoples who simply weren't as advanced or evolved as their white counterparts. Would they even see sleeping with a native woman as cheating?

But then again, perhaps these are fantasies of those who want to believe that the Prince has been carrying on decades long affairs with other women. Philip's own defense points out that a man in his position cannot carry on a secret affair, because they're never allowed to be alone to start one.

Have you ever stopped to think that, for the past 40 years, I have never moved anywhere without a policeman accompanying me? So how the hell could I get away with anything like that?