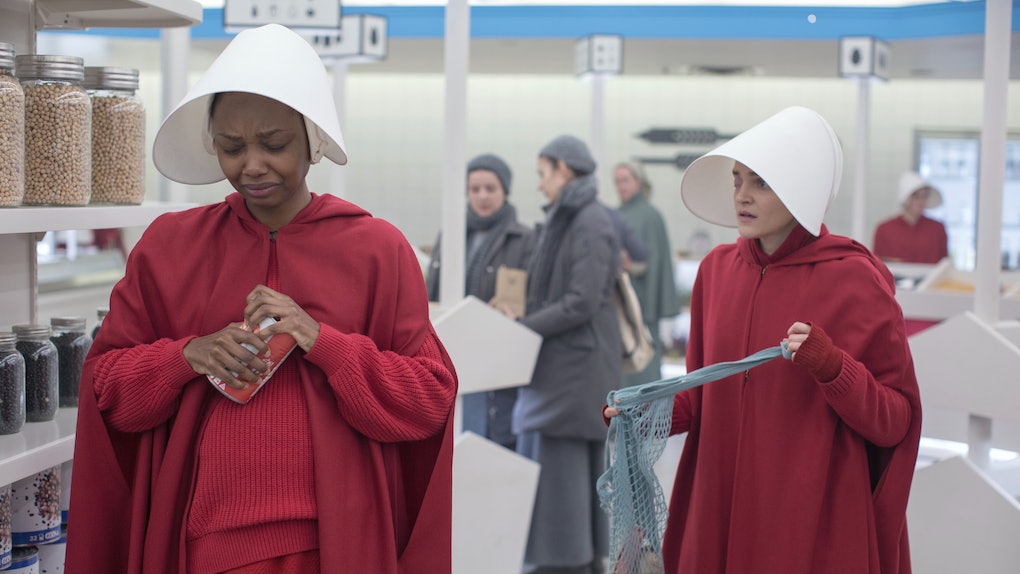 Did Janine Die On ‘The Handmaid’s Tale’? That Grocery Store Scene Was Brutal

Is it just me, or does The Handmaid's Tale somehow seem to be getting ever more grim? Although viewers have had three seasons to become somewhat desensitized to Gilead's atrocities, the show's creators still find ways to shock their audience. In the July 10 episode, this came in the form of a horrifying scene in which Ofmatthew, June's pious walking partner, appeared to have a breakdown, and violently turned on fan-favorite character Janine. Following the attack, fans of the show were almost too afraid to ask: Did Janine die on The Handmaid’s Tale? The kind-hearted handmaid can't seem to catch a break.

Although Season 3 Episode 8 largely focused on Aunt Lydia's backstory, the second main plotline had to do with June getting revenge on Ofmatthew, whose tattletale actions in the previous episode resulted in a Martha's execution and the secret relocation of June's daughter, Hannah. To get back at her, June turned the other handmaids against Ofmatthew, and even revealed to Aunt Lydia that Ofmatthew expressed displeasure about her own pregnancy — a major sin in Gilead.

It was clear to viewers that Ofmatthew was losing grip on her normally stoic composure throughout the episode, and it all came to a head during the final scene at the grocery store. When Aunt Lydia pulled June aside for a chat, June caught Ofmatthew's eye and turned away with a slight smile on her face, likely leading Ofmatthew to believe the two women were discussing her.

Meanwhile, Janine, who remained kind to the ostracized handmaid throughout the episode, was trying to soothe Ofmatthew as she began to show signs of distress. Unfortunately, that put Janine right in harm's way when Ofmatthew turned violent.

As the gruesome scene unfolded, audiences saw Ofmatthew repeatedly bludgeon Janine with what looked like an aluminum can. The last glimpse audiences get of Janine is her body face-down on the floor.

The scene is horrific on its own, but add in the other injustices that Janine has had to face throughout the series, and you can understand why fans are so upset.

Fans were especially upset by June's reaction to the tragic event. Her maniacal-looking smile while Ofmatthew beat up Janine, attacked a guard, and aimed a gun at innocents was at odds with the values viewers associate with the heroine.

Luckily, fans who stuck around to watch the Season 3 Episode 9 promo know that our girl Janine indeed survived yet another unwarranted beating. She is shown in the hospital telling June exactly what viewers of the show have been thinking for the past few episodes, saying: "Everything is always about you. Your problems. You're different."

Although fans are saying "praise be" about Janine's apparent well-being, unfortunately, things aren't looking so good for Ofmatthew. The handmaid, whose name is revealed in the promo to be Natalie, was shot at the end of Episode 8, and from the looks of the next episode's preview, is brain-dead, only being kept alive so she can carry out her pregnancy to term.

Suffice to say, things are looking bleak in Gilead right now. My advice for fans grappling with the darkness of this show is to do as Janine always tends to do: Try to look on the bright side of things.

More like this
How Many Episodes Will 'This Is Us' Season 5 Have? Only A Few Are Left
By Ani Bundel
Shonda Rhimes' Quote About Regé-Jean Page Leaving 'Bridgerton' Is SO Shonda
By Rachel Varina
The 'A Million Little Things' Season 3, Episode 11 Promo Is 1 Big Therapy Session
By Lexi Williams
Stay up to date