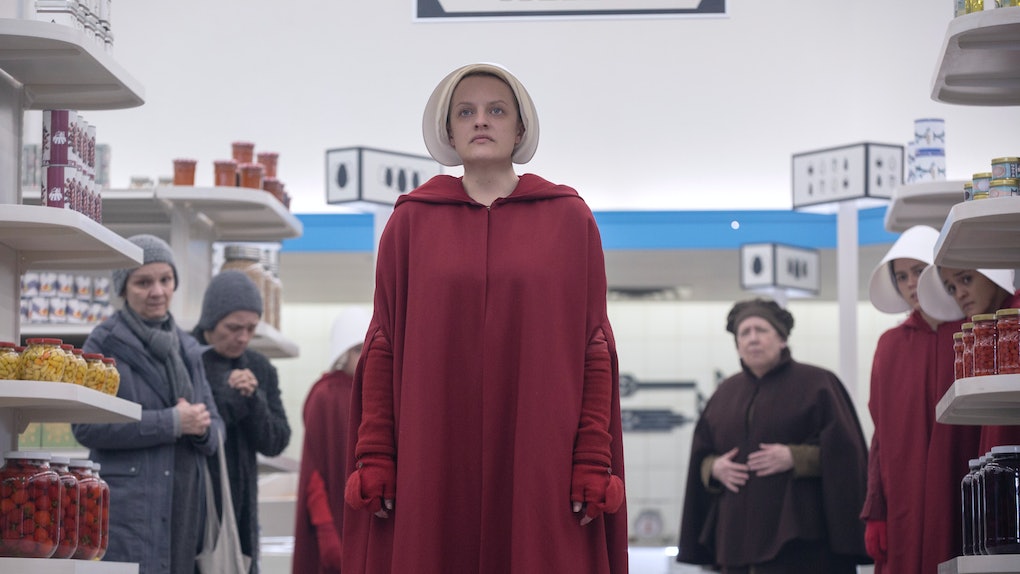 If The Handmaid's Tale Season 3 seems to be spiraling out of control, that's because the protagonist is doing the same. The first few episodes of Season 3 made it seem like June was about to begin a revolution from within, but it's become a deluge of self-destructiveness to those around her. So far, June's selfish impulses to get to Hannah have resulted in the deaths of two characters, first a Martha, and now Ofmatthew. But The Handmaid's Tale Season 3 Episode 9 promo suggests the punishment for her crimes is coming, and this may drive June further over the edge.

Seeing Ofmatthew gunned down in the market in Episode 8 "Unfit" was a shock, not just because of her actions, but because she is with child, and "being with child" is supposed to act as "Complete Immunity." The trailer for Episode 9 at least gives an answer as to how to square this circle. Ofmatthew is brain dead, but her body is being kept alive until the baby can be extracted. She is a literal womb.

As for June, her situation is no better. The synopsis for this coming week reads:

Confined to a hospital, June's sanity begins to fray. An encounter with Serena Joy causes June to reassess her recent actions.

One of the primary issues in Episode 8 is that June drove Ofmatthew to snap and attempt to murder her way out of Gilead. Angry at Ofmatthew for snitching on the McKenzie's Martha, June first turned the other handmaids on her walking partner, and then led them in a scene of horrific emotional abuse. When Ofmatthew saw June talking to Lydia, she assumed that June was betraying her right back.

In truth, June wasn't doing any such thing. For all that Lydia is genuinely horrific, this week's scene of the Aunts discussing household placements revealed June's boss has her dead to rights. "Ofjoseph" is a ticking time bomb, and should be removed from her current placement in hopes of diffusing her.

Ofmatthew may have interrupted Lydia's planned transfer of June to another household, but her now-current situation affords the Aunts a different path to re-breaking June. June will be the stand-in Handmaid to usher Ofmatthew's child into the world, which means locking her up in the hospital with the body of a woman whose brain death she caused.

Precisely what kind of number this will do to June's mental health remains to be seen. But from the glimpses in the trailer, it looks like this might be one of the most torturous hours in Gilead yet. As for how Serena Joy winds up in the hospital along with June remains to be seen.

But however it happens, it's about time June took a step back to recognize how badly she's behaved, and how much danger she's putting those around her in, all over the single-minded determination to get to Hannah. Is her daughter worth so many lives?

The Handmaid's Tale Season 3 Episode 9 airs on July 17 on Hulu.