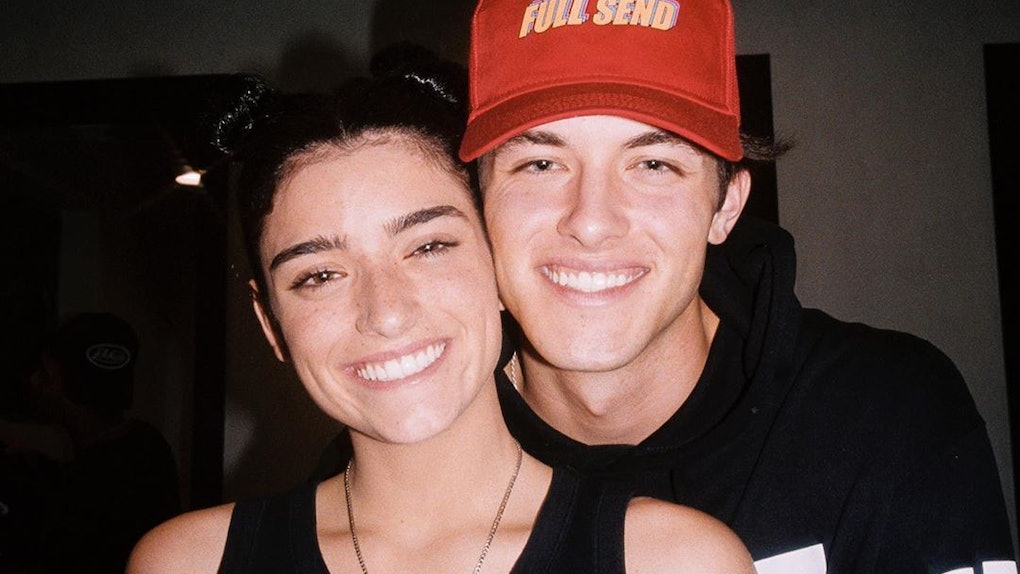 Did Dixie D'Amelio & Griffin Johnson Break Up? She Unfollowed Him

Another TikTok couple bites the dust? Just a little over a month after confirming their relationship in a June 23 TikTok vid, fans think Dixie D'Amelio and Griffin Johnson broke up because D'Amelio unfollowed Johnson on social media. What's worse: There may have been some cheating involved. (Elite Daily reached out to reps for D'Amelio and Johnson for comment on the rumored breakup and cheating but didn't hear back in time for publication.)

The drama started after TikTok user @mgalley15 posted a video exposing Johnson for sliding into her DMs and sending her Snapchats saying things like, "I'm single btw" and "send toes." D'Amelio found the video and commented, "…" and that basically sums up my feelings about the vid. Then, on July 30, fans freaked when they noticed D'Amelio had unfollowed Johnson on both Instagram and Twitter — and yes, @tiktokroom obvi has the receipts to prove it.

A few weeks earlier, on July 7, Chase Hudson claimed in a since-deleted note on Twitter that Johnson had already reportedly cheated on D'Amelio at least twice — once with Tayler Holder's ex-girlfriend, Kaylyn Slevin, and another time with Bryce Hall's ex-girlfriend, Elle Danjean. (Elite Daily reached out to Hudson, Slevin, and Danjean for comment, but didn't hear back in time for publication.) D'Amelio fired back, telling Hudson to mind his own business, and Johnson responded with a tweet saying, "someone get this kid off the internet." But they didn't exactly deny the accusations. Just saying!

Soon after fans noticed D'Amelio unfollowed Johnson from IG and Twitter, Johnson changed his Twitter header — which used to be pic of him and D'Amelio — to a group pic of him with friends. As of July 31, Johnson still follows D'Amelio on social media, and neither D'Amelio nor Johnson has deleted any of their couple pics from their Insta grids. But things aren't looking good, guys.

So who is the mysterious @mgalley15 who posted that TikTok exposing Johnson? According to Instagram, Madison Galley grew up a town away from D'Amelio, though it's unclear whether she and D'Amelio knew each other before all this drama went down. All I know for sure is this situation is messy AF, and I can't wait to see what happens next.