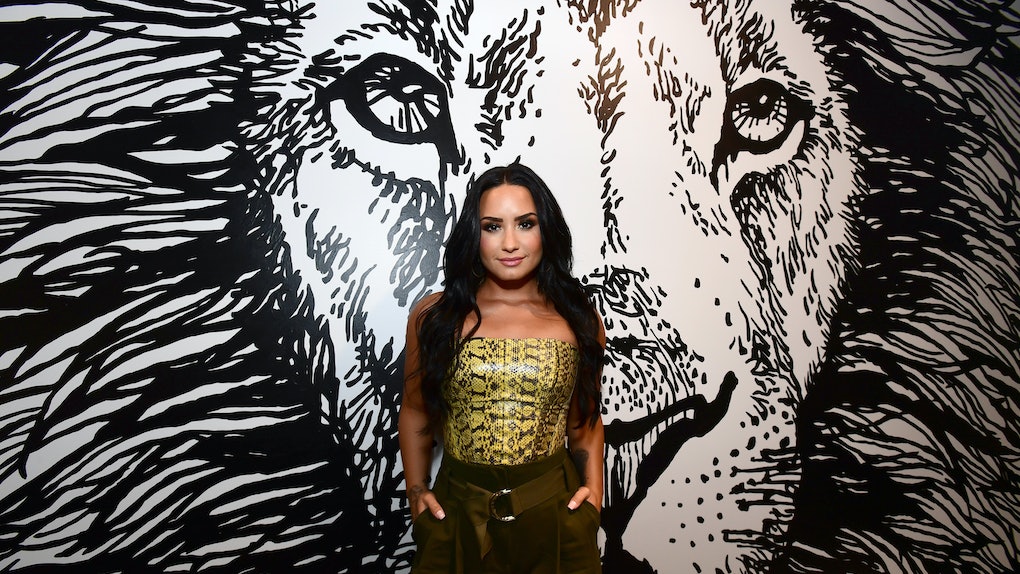 Demi Lovato's Swimsuit Instagram Gets Real About Loving Yourself & It's Everything

Demi Lovato just gave everyone the best possible start to the new year by reminding us, as she always does, to love ourselves unconditionally every single day. On Jan. 4, 2018, the pop singer and all-around amazing role model posted a photo of herself on social media that, on the surface, looks like any other beach pic. But the truth is, we can all learn something from Demi Lovato's swimsuit Instagram, which is all about loving yourself from head to toe, regardless of any past or present "imperfections."

Lovato, who recently released her behind-the-scenes documentary Simply Complicated detailing her struggles to overcome drug abuse and an eating disorder, is no stranger to messages of empowerment and self-love. She has spoken out again and again on the importance of being your own greatest advocate, of loving bodies of all shapes and sizes, and of being honest with who you are and what you're going through. Her latest Instagram post was no different: a totally untouched bikini photo which, she admits, she's not totally happy about.

In the caption of the post, Lovato noted her insecurity about how her legs look in the photo, but said she was posting it anyways, "because I look so happy, and this year I've decided I'm letting go of my perfectionism and embracing freedom from self criticism."

Lovato's message is a powerful one in any context, but it's especially inspirational coming from someone who works in an industry that often body-shames and disparages diversity.

In the Instagram post, the 25-year-old pop singer opened up about her own personal struggles with learning to love her body the way it is, and revealed that "giving up my eating disorder has been the most challenging journey of my life, but I work every day towards solid recovery even if I mess up sometimes."

Her final note was one of positivity and feeling strong, reminding her fans, "You all can do it too. It IS possible. Thank you God for this new chapter in my life. #EDrecovery#happyAF"

If we weren't already certain of it, this post basically cements Lovato as one of the ultimate Hollywood role models for her constant efforts to promote honesty and self-love.

It's easy to talk about the good days, but it takes a much stronger person to admit when she's having a bad day.

Plus, it's always a massive relief when someone we consider to be "perfect" pulls back the curtain on social media authenticity: You never know how someone's feeling when they post a picture or a status on social media, and you should never assume anything about their identity.

In her film Simply Complicated, Lovato confirmed that she was clean from addiction, but hadn't yet learned how to overcome her eating disorder. She explained,

When I was in a relationship with Wilmer [Valderamma], I went three years without purging, and when we broke up that's the first thing I did.

She admitted the power that her disorder can sometimes have over her, and that it's "something I'm constantly thinking about."

Eating disorders are far more common among women in the United States than many would think.

The National Eating Disorder Association estimates that approximately 10 million women in the U.S. have an eating disorder.

Since eating disorders are often associated with shame and the desire to hide one's problems, this number could easily be exponentially higher. Demi Lovato's decision to speak out about her own disorder, and to stay continually honest about her struggles time and time again, is a massive move to de-stigmatize something that affects a large percent of our population.

This year, I'm making a resolution to be a little bit more like Demi Lovato: to be honest about my hangups, to be open with my community about what I'm going through, and to work hard to connect with others on social media, rather than isolate myself or give off a false image of perfection.