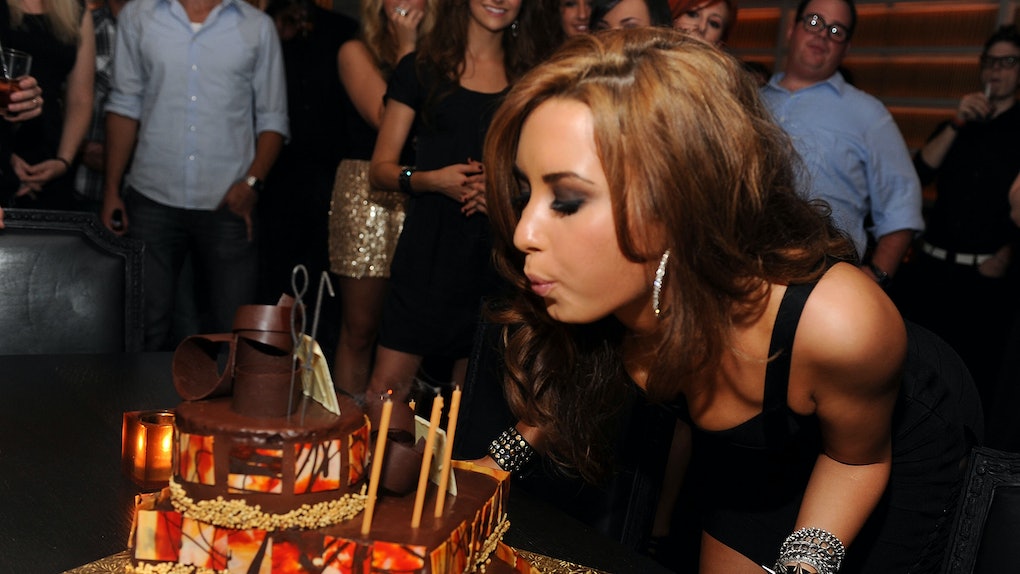 Demi Lovato's Favorite Foods Are Definitely In Your Fridge, So Eat Up

I have worshiped the goddess that is Demi Lovato ever since the Disney Channel was christened by her drop-the-mic vocals and (kind of awkward, but still fabulous) dance moves on the Camp Rock stage. Unlike the majority of Hollywood that lives and breathes for insta-fame and any kind of press, Lovato’s unapologetically doing her thang regardless of whether or not it suits our fancy. In my opinion, the actress-turned-pop-star-turned-advocate is essentially life goals, which obviously means I’ve been keeping tabs on Demi Lovato’s favorite foods so that I, too, can slay all day like this queen.

Of course, with so much epic content to upload on her social media accounts (i.e. hangout sessions with heartthrob Nick Jonas, videos of her killing it at the gym, and countless selfies capturing just how bae this babe really is), foodtography isn't exactly on Lovato's radar. You're hard-pressed to come across a snapshot of an actual meal on the performer's feed (trust me, my finger is numb from scrolling), but Lovato is generally pretty open about her struggles with food, how she's been treating her disordered habits, and what types of food she genuinely enjoys indulging in these days.

Like any other celebrity, some of Lovato's favorite combinations are a bit strange (oatmeal and egg white pancakes come to mind), but when you're a self-made girlboss like she is, I guess you make due with what you have on the go. Curious to know what Demi Lovato eats in a day? Here are a few of her staples.

1. Lovato Starts Her Day With A Caffeine Fix

Who here is actually surprised that this powerhouse of a woman runs on caffeine? Seriously, Lovato does a balancing act 24/7, scheduling double workout sessions first thing in the a.m., making time for self-care rituals like washing her face and applying her favorite products, and then, you know, conquering the world one bomb lyric at a time. It's no wonder the first thing she gravitates toward when she wakes up is a fresh pot of the good stuff.

Lovato told The Cut that, on average, she wakes up at 8 a.m. (not as early as I would have imagined, TBH), and downs a cup of coffee before heading to the gym. Personally, if I had coffee sloshing around my insides during an intense workout class like kickboxing or jiu jitsu (two of Lovato's faves), I'd probably throw up. But, I have heard people use coffee as a pre-workout instead of powder supplements — whatever gets you energized!

2. Her Post-Workout Snack Is Nutritious AND Delicious

Typically, Lovato exercises first thing in the a.m. so, aside from coffee, she goes into her workouts fasted. I can only imagine this leads to ravenous cravings after the fact (I know myself, and I'm starving after a killer sweat sesh).

She told The Cut her go-to meal after a workout is loaded with "berries, some nuts, bananas, and kefir." Basically, she's got all the bases covered, as berries are loaded with antioxidants, nuts provide healthy fats and protein, bananas cover her potassium intake, and kefir is swarming with probiotics, vitamin B12, and other essential vitamins and minerals.

3. Healthy Pancakes Are Another Breakfast Fave

Listen, I'm a self-proclaimed foodie myself. I live for the latest and greatest healthy alternatives to traditional favorites. Pancakes, however, are something I'd rather not mess around with out of personal preference.

That being said, Lovato's clearly up for experimentation. Her healthy take on pancakes may have me feeling hesitant, but according to an interview with Women's Health UK, she absolutely loves flapjacks made with oatmeal and egg whites topped with applesauce and fruit.

4. She's Totally Down With Taco Tuesday

Lovato is just like the rest of us: She wants to be healthy, but she doesn't want to feel like she's missing out on the delicious, yet maybe not-so-good-for-you tastes out there.

In an interview with Fitness Magazine circa 2015, the starlet explained that eating on tour was difficult, but to make sure she balanced delicious with nutritious, one of her favorite go-to meals was a taco stuffed with "ground turkey and spinach on a corn tortilla" topped with all the fixings like shredded lettuce, vegan cheese, and, of course, hot sauce.

"It's simple," she told the magazine, "but still has a ton of flavor, so I don't feel deprived."

5. Wraps Have Become Her Go-To Staple

Lovato gave Women's Health UK a rundown of what a typical week looks like on the road. Aside from her interesting spin on pancakes for breakfast, I noticed the "Sorry Not Sorry" singer often goes for some sort of wrap around lunchtime.

From what I can tell, they're really simple to make, too. She fills tortillas or lettuce wraps with anything from turkey to shredded pork and pineapple. This is definitely a quick fix anyone can mimic to get in some protein, carbs, and a ton of flavor in between rehearsals or meetings.

6. Pickles Are One Of Her Favorite Snack Foods

Personally, I'd love to peek into the refrigerators of performers' rooms backstage to see what kind of snacks they have on their shelves. Luckily, we now have Instagram to answer these burning questions.

As if I needed a reason to love her even more, Lovato uploaded this pic of jarred pickles to show fans she's serious about her flavorful probiotic snacks. She even went to the trouble of creating a label for the container. A woman after my own heart, I tell ya.

7. Cashews And Chocolate Milk Are Her Favorite Treats

Is it just me, or do celebrities come up with the most random food combinations? First Meghan Markle sprinkles cinnamon on her watermelon and Himalayan pink salt on her apples with almond butter (not bad, TBH), and now I've come to find that Lovato's idea of a sweet indulgence is a anything made of cashews and chocolate? I mean, whatever floats her boat, I guess.

Lovato told PopSugar she follows a pretty strict regimen that eliminates processed food, refined sugars and flour, but she'll occasionally treat herself to things like cashew butter and dark chocolate. These are definitely not two things I would personally throw together, but the contrast sounds pretty damn delectable now that I think about it.