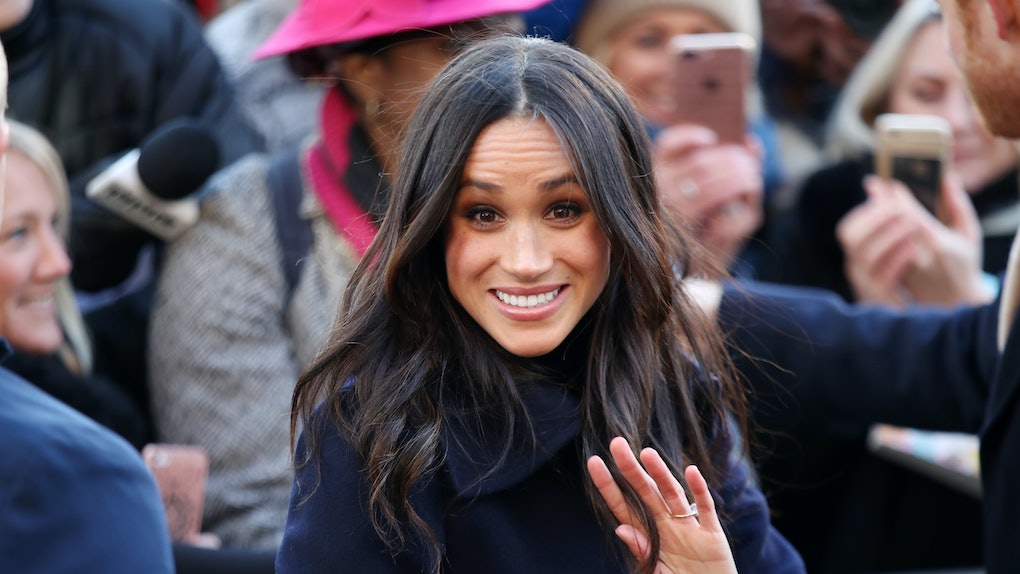 What Meghan Markle Eats In A Day Sounds Tasty AF, So Here’s How To Make It At Home

The countdown is officially on for the next royal wedding. Hearts will be breaking all over the world on May 19, when Prince Harry of Wales will officially say, “I do” to American actress Meghan Markle. Naturally, the world is pining for any and all nuptial details, like what the future princess’s dress will look like, the couple’s signature drink, and honeymoon plans, but fans of both the Suits star and the prince are curious about preparations, too, like what Meghan Markle eats in a day to help her play the part of princess. From what I’ve gathered, her future highness doesn’t joke about food, and she certainly doesn’t need princess lessons to teach her how and what to eat to keep her royally satisfied.

I'll admit that before Markle started dating Prince Harry, I didn't know much about her other than the fact that she was making out with Pretty Little Liar's star Troian Bellisario's IRL hubby on Suits (because the last six years of my life revolved around PLL, don't judge me). Now that the couple is engaged and getting married in only a matter of months, I did my homework on the new royal and, like the rest of the world, am now girl-crushing hard.

Not only is she an absolutely beautiful person inside and out, she's unapologetically who she is, and one of her strongest character traits, in my opinion, is her appetite. Guys, the woman can eat, and her Instagram is a collage of delicious-looking healthy foods that actually make me want to ditch cake for kale chips (but I won't, because she wouldn't either — it's all about balance in this princess's book).

One of my favorite things to know about people is what they like to eat on a daily basis — partially for my own meal inspiration, mostly because I'm just nosy. But if you clicked this article in the first place, chances are you're dying to know what this royalty-to-be snacks on every day. Here's what you need to eat in order to be eligible for the throne (JK, but kind of not really).

1. Wine Is A Must For This To-Be Royal

If you've kept up with our royal brethren across the pond, I’m sure you’ll recall Harry being quite the party boy. Naturally, our red-headed prince would choose a princess with a signature drink.

Markle’s alcoholic bev of choice isn’t top-shelf liquor, but a classic glass of wine on occasion (and by “on occasion,” she means often, duh). She told Delish that vino is, in fact, one of her vices, and that she’ll pass up chocolate desserts for a “big, beautiful red” any day of the week.

2. She'll Take An Apple With Almond Butter For A Snack

Even though this simple pairing is super reminiscent of elementary school lunches, it really doesn't get much better than dipping a juicy piece of fruit into a mound of nut butter.

What makes this go-to snack really stand out, though, is Markle's secret ingredient: a sprinkle of sea salt. Somehow, I don't see this becoming a royal delicacy, but stranger things have happened.

3. She Has No Problem Devouring A Plate Of Fries

This is how I know Markle and I would get along. French fries are my absolute favorite side dish, snack, or hell, I'd eat a plate of 'em for dinner. The princess-in-waiting told Delish that she's secretly always hoping a lunch date is on her calendar so she "can share fries." As for Markle, this variation of potato is "its own food group." Personally, I concur.

But, pro tip, you don't have to eat out or own a deep fryer to make a plate of these goods for yourself. French fries (or "French bakes," as my husband has pegged my recipe), are easy to whip up in the oven. All you have to do is wash the potato, cut to your preference, massage the pieces in a drizzle of olive oil and tossed in seasoning (garlic, chili powders, salt, pepper, and nutritional yeast is my go-to combo), and bake in the oven at about 375 degrees Fahrenheit for 30 to 45 minutes.

4. A Tall Glass Of Green Juice Quenches Her Thirst

Markle was destined to be royalty, as an interview with Today circa 2012 proves that even before she was betrothed to Harry, she was eating and sipping the way I can only assume the royals do (that is, when they're not drinking tea and sampling crumpets).

Rather than chugging a venti Americano to combat the 3 p.m. slump, Markle says her go-to is a green juice. She told Today,

If I blend some apple, kale, spinach, lemon and ginger in my Vitamix in the morning and bring it to work, I always find that sipping on that is a much better boost than a cup of espresso.

Play with the recipe—toss in berries or use almond milk—at the end of the day, your body will thank you for nourishing it with so much fresh goodness.

5. Markle Is All About That Taco Tuesday Life

I hope they like California cuisine at the royal palace, because if Markle has it her way, she'll be serving up tortillas stuffed with flaky, white seafood. When she has the chance to get behind the grill, Markle told Today she'll throw on some peppers, onions, filets and season it all with salt and pepper to taste. My mouth may or may not have just watered typing that out. Yum.

Markle may love fried spuds, but when it comes to something to crunch on as a midday snack, she's really into kale chips. She does admit, though, that prepping your own can be time-consuming, "mostly from washing the kale and patting it dry," she told Today.

There are a handful of kale chip recipes floating around the internet, like this one from The Edgy Veg that mimics a store-bought bag of Doritos. If you're looking to copy Markle's recipe, however, she drizzles hers with olive oil and sprinkles on Himalayan pink sea salt for taste.

Ah, guilty pleasures — everybody has them, right? In an interview with Athena Calderone of the blog EyeSwoon, Markle admitted to lusting over boxes of creamy macaroni and cheese. Her favorite, she says, is Annie's organic recipe:

I now buy the Annie’s organic one if I’m craving it, but I throw some frozen peas into it and have this gooey simple childlike meal.

I used to cook it for the kids I would babysit and I always enjoyed feeling like a kid and eating it with them.

8. She's Into A Weird Combo Of Watermelon And Cinnamon

Yeah, you read that right, friends. The woman marrying Prince Harry likes to snack on slices of watermelon sprinkled with cinnamon. Personally, I think this sounds incredibly weird and borderline gross, but I like watermelon and I love cinnamon separately, so maybe I shouldn't knock it until I've tried it?

Markle told Today that watermelon makes her think of summertime, so a container full of the hydrating fruit topped with cinnamon is a special treat with "elevated flavor." I mean, she's the princess, so I guess I'm just going to have to trust her on this one.