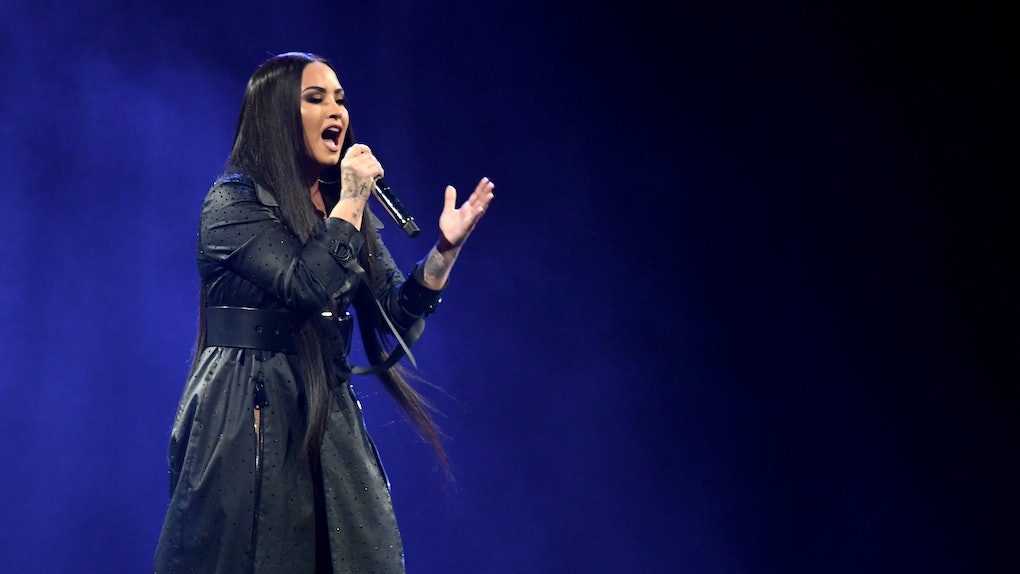 Disney Channel fans, your time has finally arrived. If you've been hoping — no, praying — for your fave Disney stars to unite once more, then have I got some news for you, and it comes in the form of a glorious, glorious photo. That's right, our girl Demi Lovato posted a Disney Channel reunion photo to her Instagram story, and it will make you feel nostalgic AF.

Does the name Cole Sprouse ring a bell? How about Alyson Stoner? Perhaps you remember someone by the name of Matthew Scott Montgomery? Who am I kidding? If you know the Disney Channel, then you know these names. According to Teen Vogue, all of these stars came together (along with our girl Demi) on Wednesday, April 4 to celebrate Disney Channel star Hayley Kiyoko's debut album, Expectations, because once a Disney star, always a Disney star.

And, in true Disney form, the reunion pic was shared by many of the Disney Channel stars. Demi Lovato posted the photo to her Instagram story, with a title that said "Disney Channel Reunion!," and actress Debby Ryan (The Suite Life on Deck, anyone?) did the same. Montgomery posted the photo on his own Instagram, tagging his fellow Disney mates with a caption that read:

FRIENDS, I AM WEEPING.

Of course, fans were absolutely living for it, because HELLO, look at this photo! Look at how much they've all grown!

I can't even blame them, TBH. I'm just as psyched as the Twitterverse is.

It's nice to see everyone coming to support one of their own, despite how incredibly busy their lives seem to be, especially Demi Lovato. She's been *pretty* occupied — and not just sliding into Instagram DMs, either. As part of her Tell Me You Love Me tour, Lovato announced that she will offer free therapy sessions to any of her fans struggling with their mental health. I know, I know — just when you thought you couldn't idolize her any more. So yeah, one could say that Lovato is busy not only crushing life, but helping others along the way.

Demi, you are an actual angel.

Lovato has also been incredibly open about her struggles with mental illness and sobriety. In an interview with Elvis Duran as part of the iHeartRadio's Label Defiers with ZICO Coconut Water podcast in July of 2017, Lovato spoke about how being bipolar is not who she is, but is rather one small part of her:

I think when people refer to me as being bipolar, it's something that is true — I am bipolar — but I don't like people to use it as a label. It's something I have, it's not who I am ... I think Demi Lovato, activist, is something that I would really be proud of.

She also stressed that, given her position, raising awareness is key. She said,

I think it's important to speak up about the things that you believe in because your voice will be heard no matter what position you're in. And I just happen to be in a position where more people will hear my voice than they would have 10, 15 years ago. I use my voice to do more than just sing and I use it to speak up about mental health because that's something I'm very passionate about ... I'd say the whole world knows the real me because there's nothing that I hide.

One reason (among many) that we love our girl Demi. And, let's be honest, the entire Disney Channel crew, all of whom will remain in my heart forever.

I think now is a great time to dust off that Camp Rock DVD, don't you?