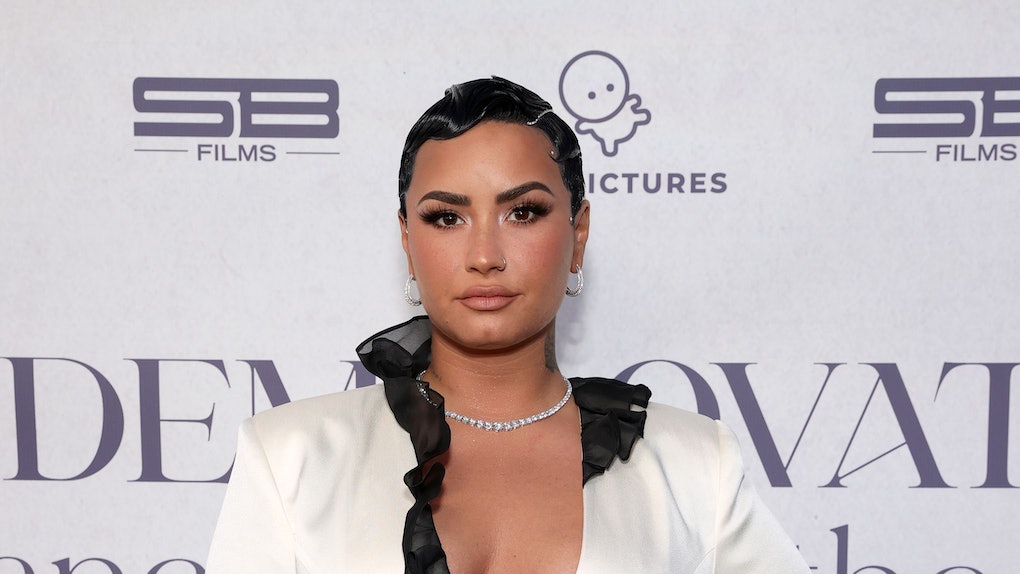 Demi Lovato Called Out A Froyo Shop For Promoting Dieting Culture, & It's Getting Mixed Reactions

Demi Lovato has fans very divided after she called out a beloved Los Angeles froyo shop for their menu. Lovato, who recently visited the shop in-person, was less then thrilled to see what she perceived to be "diet" options on the menu. Taking to Instagram on April 18, Demi Lovato called out the froyo shop for promoting dieting culture, but some think her post missed the mark. What the "Dancing With The Devil" singer may not have realized is the options in question were labeled sugar-free not because they were weight-loss options, but because they were intended for diabetics.

Lovato made a weekend stop at the Bigg Chill for a sweet treat, but told fans she found it "extremely hard to order froyo" from the store due to their "diet foods." In addition to posting publicly about the shop, she DM'ed them directly about her issue.

"You have to walk past tons of sugar free cookies/other diet foods before you get to the counter. Do better please," her public post said. Lovato also posted screenshots of her conversation with the shop owner where she called them "rude" in addition to criticizing the menu.

"You can carry things for other people while also caring for another percentage of your customers who struggle DAILY just to even step foot in your store," she wrote. "You can find a way to provide an inviting environment for all people with different needs. Including eating disorders."

The froyo shop defended themselves in a message back to Lovato, stating that they try to cater to customers with a variety of dietary needs.

"We are not diet vultures. We cater to all of our customers needs for the past 36 years. We are sorry you found this offensive," the shop said.

After fans caught wind of the exchange, they were conflicted. While some sympathized with Lovato's message due to her history with an eating disorder, others felt the remarks were misplaced and she should not have targeted a small business during the pandemic.

"I love her so much but I wish she wasn’t no narcissistic sometimes. Like she is the only person in the world with a mental illness. I am f*cking diabetic. I am grateful as f for damn sugarfree cookies and sugarfree froyo," one person tweeted.

"Demi is literally offended over sugar free cookies at a local froyo shop. She is attacking a small business that is just tryna survive during a pandemic cause they didn’t think about her feelings," another tweet read.

Others understood why the messaging on the froyo shop's menu could be damaging to someone who has dealt with an eating disorder in the past.

"I wholeheartedly agree with Demi," one fan wrote. "It's EVERYONE'S responsibility to combat diet culture. Anyone with an ED could see how triggering it is."

Lovato later apologized for targeting a small business with her posts.

"I'm genuinely sorry that people took it the wrong way. I just get really passionate," she said in a follow-up post. "It's never coming out of a place of hate."