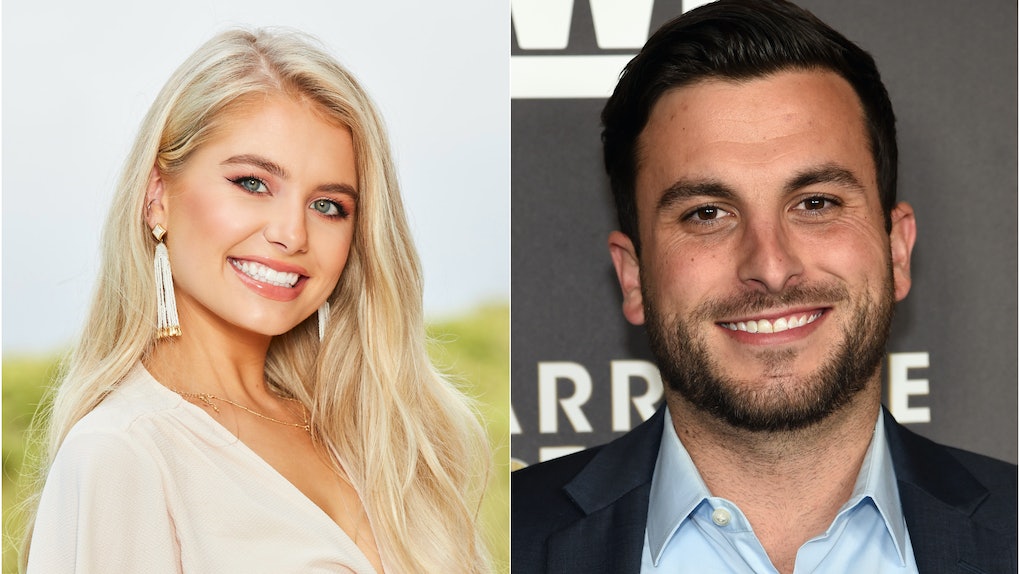 Bachelor in Paradise contestant Demi Burnett made franchise history when she came out as queer in Season 6's premiere episode, but the resulting focus on her pre-show relationship with a woman hasn't sat well with some of Bachelor Nation. Demi's caution about labeling her relationship resulted in her exploring other romantic options on the show, which led Paradise alum Tanner Tolbert to compare her actions with those of other Bachelor Nation contestants who appeared on shows while being in real-life relationships. Demi Burnett and Tanner Tolbert's Twitter feud brings up valid points, but fans are split about who's in the right.

In case you missed it, Demi shared the truth about her love life to several friends on Week 2 of Paradise, telling Katie Morton, "I have been dating a woman back home. I do miss her and I think about her all the time, and I am so in with her, but trying to come here and figure out stuff about myself ... I really don't know what I want."

Derek Peth, Demi's Paradise love interest, was supportive of her news, saying they could take things slowly as she sorted through her feelings. He and others on the Paradise beach might have been cool with her relationship, but Season 2 contestant Tanner took to Twitter with his disapproval. In a since-deleted tweet, he compared Demi's actions to those of The Bachelorette's Jed Wyatt, whose ex-girlfriend alleged that they were together right up until he left for the show and that he initially intended to resume their relationship afterwards.

Tanner then tweeted about Demi telling Hannah Brown about one of her Bachelorette contestants having a girlfriend — resulting in his dismissal from the show — and now entering Paradise with a relationship of her own back at home. Tanner also speculated that Demi planned to get engaged to her girlfriend by the end of Season 6.

Fans immediately called out Tanner for the remark, pointing out that Demi's prior relationship was reportedly not exclusive while Jed's ex supposedly believed he was committed to her. Demi was also honest about her past while Jed kept his a secret until right after his Bachelorette proposal. Hannah B., who ended her engagement to Jed following his ex-girlfriend's reports, tweeted in support of Demi, writing, "One is my best friend, one is my ex-fiancé....I can tell you first hand, not the same."

Demi also clapped back at Tanner, tweeting, "Oh f*ck off, not the same at all." Tanner responded, "It’s not the same thing? Then how did I hear about your 'plan' before filming even started?"

In her reply, Demi wrote, "There was NO PLAN. You are speaking on something you HEARD about as if it is a fact. I was 100% honest and upfront the entire time."

The former Bachelorette contestant, who met and got engaged to wife Jade Roper on Season 2 of Paradise, later clarified, "Before filming even began I heard that Demi planned to leave the show engaged to this girl ... I support Demi fully, but she could have proposed off the show. I am tired of everyone talking beforehand and pre-planning these relationships."

In a series of Instagram stories, Tanner then wrote, "I am a big Demi fan and wish her nothing but happiness. I just don't like how everyone tries to stage sh*t these days ... everyone needs to only go on the show if they are in fact looking to to meet someone 'new.' Maybe I'm old school...but I liked it better when people actually 'met' for the first time on the show."

Fans have to wait and see if Tanner's claims about Demi getting engaged turn out to be true, but for now, viewers are still torn about who's right in this situation. On one hand, the whole point of Bachelor in Paradise is to explore as many new connections as possible. On the other, Demi has been fairly open about her thoughts and why she still pursued Paradise, so why should she be punished for that honesty? Both sides of the argument definitely have notable points, so Bachelor Nation will have to keep an eye out for any updates in this feud.