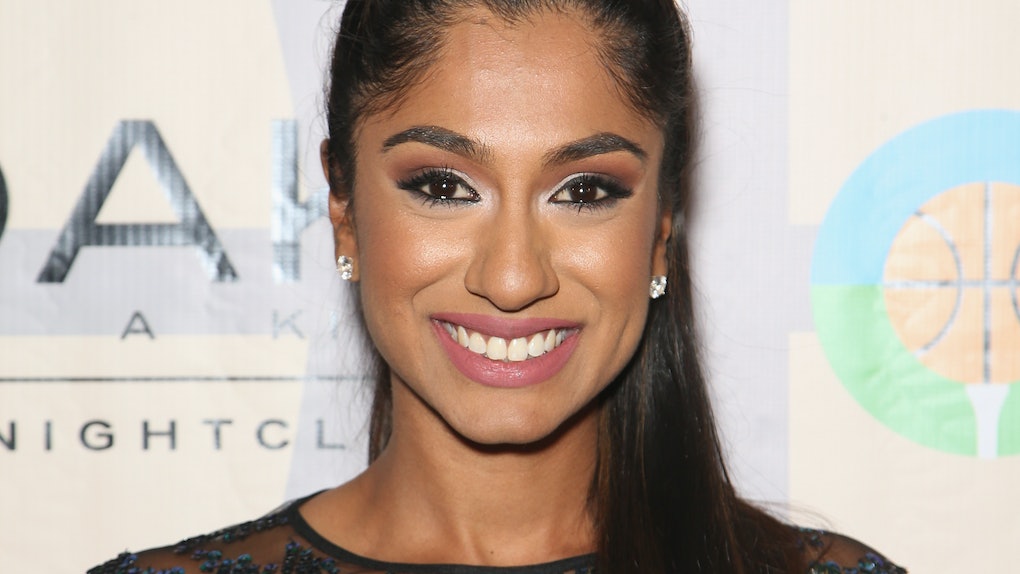 Rumor has it Clare Crawley is in love — and apparently, she fell for one of her contestants before filming even began on The Bachelorette Season 16. According to a source for People, Season 16 contestant Dale Moss reportedly reached out to Crawley prior to meeting her, and fans think the maybe-couple could even be engaged already. Though Bachelor Nation is still busy gathering intel on the former NFL star and model, fans do know a little bit about his dating history. Dale Moss's ex-girlfriend, Seema Sadekar, is a professional golfer, and reportedly, he and The Golf Fashionista (as she's known) were in a pretty serious relationship before he met Crawley. (Elite Daily reached out to reps for Sadekar and Moss for comment on their breakup but didn't hear back in time for publication.)

As a source reportedly told Life & Style, the couple was together "for a while" before splitting. "When I met him, they had just broken up," the insider claimed. "My impression was he always wanted to get back with her. When it comes to girls, she's the one he would talk about the most." Fans aren't sure how long the couple actually dated or why they went their separate ways, but it's clear Sadekar is kind of a big deal (and not just because she currently has over 50,000 followers on Insta). The IMG Sports Academy graduate is a legend in the golf world, and so is her sister, Nisha.

Just like Venus and Serena Williams, the Sadekar sisters are professional athletes and trend-setting fashionistas. Born in Toronto, Canada to Indian immigrant parents, Sadekar and her older sister started playing golf with their dad as kids. After graduating from the IMG Sports Academy in Bradenton, Florida in 2005, Sadekar earned a full scholarship to the University Of Nevada Las Vegas, which has one of the most recognized golf programs in the country. While she was a member of UNLV's Lady Rebels golf team, she was also a National Collegiate Athletic Association (NCAA) All-Star Team selection in 2006 and a three-time member of the Mountain West Conference Championship teams.

According to a 2010 interview with Into the Grain, Sadekar played in her first Ladies Professional Golf Association (LPGA) event when she was 19 years old, making her one of the youngest amateurs in the history of the LPGA Tour's CN Canadian Women's Open. "I was the youngest Canadian in the field and I remember having a huge following with so many people cheering for me," she said. In 2008, Sadekar entered the professional circuit as a Rookie, and that same year, Sadekar won the CN Canadian Tour Money List and qualified for the LPGA Symetra Tour. Then, five years after going pro, Sadekar began designing golf apparel.

Alongside her big sis Nisha, the golf pro also founded Play Golf Designs (PGD) Global, a golf marketing and event company, in 2006, and she still serves as vice president of the company. Between her golf career, her PGD Global responsibilities, and her lifestyle blog, Sadekar is busy, and if she's currently seeing anyone, she isn't public about it.

She and Moss were undoubtedly a power couple, but here's hoping Moss is just as happy with the new lady in his life (if he and Crawley are actually dating, that is).