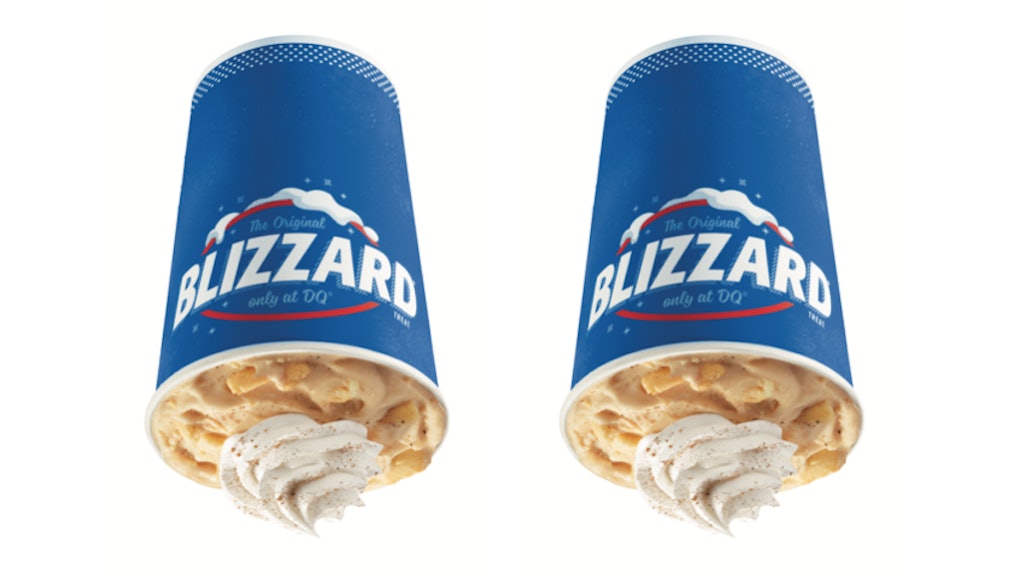 Dairy Queen's Pumpkin Pie Blizzard Is Coming Back Aug. 26 For An Early Taste Of Fall

We might only be less than halfway into August, but retailers are already busy trying to get consumers hyped for fall and all the autumn-forward bites and sips that come with the changing of seasons. Case in point: Dairy Queen's Pumpkin Pie Blizzard is already coming back as soon as Aug. 26, and the seasonal treat will have you thinking of crisp fall mornings, sweater weather, and PSLs while digging in. Luckily, you can have your cake and eat it too, because there's nothing better than getting a cozy taste of the fall months while relaxing poolside and enjoying the last few weeks of patio season.

Per press materials shared with Elite Daily, Dairy Queen announced that it is bringing back one of its beloved seasonal Blizzards that's been a staple at DQ locations for over 25 years. The Pumpkin Pie Blizzard Treat, which features real chunks of the seasonal dessert blended with swirls the company's signature soft serve, will be available at participating Dairy Queen locations nationwide starting on Aug. 26 for a limited time. In my personal opinion, every season should be pumpkin pie season, and it's a welcome (and very refreshing) way to taste the first notes of fall while keeping cool as the summer comes to a close.

In case you needed a refresher, the Pumpkin Pie Blizzard is described as a "deliciously sweet and creamy combination of real pumpkin pie pieces hand-blended with signature DQ vanilla soft serve, crowned with whipped topping and a touch of nutmeg," per press materials. Basically, you can expect to get all your Pumpkin Spice Latte cravings satisfied in the most seasonally-appropriate way possible, i.e. a thick and decadent frozen blizzard that's served upside down, and my tastebuds are already rejoicing ahead of its launch.

Speaking of Blizzards, I have to admit that Dairy Queen has been slaying the dessert game recently with the much-hyped return of its Snickers Blizzard Treat as well as its new Peanut Butter Pie made with Snickers Blizzard Treat, which are both available through the end of August at participating DQ locations nationwide. With the Snickers Blizzard Treat, which was a DQ regular until it was pulled back in 2016, you'll be getting a mix of the retailer's classic vanilla soft serve that's swirled with "roasted peanuts, chewy nougat, caramel, and milk chocolate" and crowned with a "rich chocolaty topping." Meanwhile, the Snickers-embedded Peanut Butter Pie Blizzard promises to be the stuff of PB lovers' dreams by a layer of peanut butter topping and graham cracker crumbs to the soft serve and chunks of Snickers that you'd find in the OG Blizzard. In short, you have no shortage of sweet tooth-satisfying options to try at your local Dairy Queen during the month of August, and something tells me that the retailer will be upping their game heading into fall and the countdown to Halloween, aka candy season.

I'm definitely not ready to say goodbye to patio season, but I have to admit that these autumn-ready treats do make the coming transition to fall a little bit sweeter.