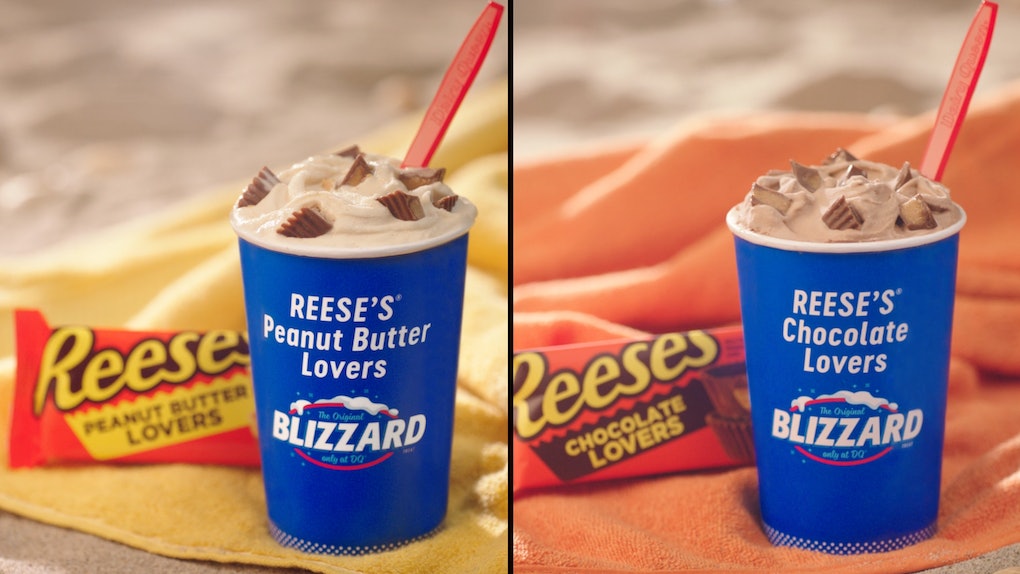 In this world, there are two different types of Reese's Peanut Butter Cup eaters. The first type attentively savors the peanut butter. Maybe they bite the cup in half to lap up all the peanut butter they possibly can, or they might just pick off all the chocolate to get to the good stuff. The other type diligently enjoys every bit of chocolate, carefully nibbling off the outer shell, before eventually making their way to the peanut-buttery center. But now, Dairy Queen's June 2019 Reese's Blizzards will have fans enjoying a little more of their favorite flavor with two crave-able options. TBH, choosing one might be nearly impossible.

For any choco-monsters out there, on the other hand, the Reese's Chocolate Lovers Blizzard Treat looks pretty tantalizing, too. According to the release, it blends chunks of Reese's Peanut Butter Cups and decadent cocoa fudge into creamy DQ vanilla soft serve, giving you a rich blast of chocolatey deliciousness.

In the press release, Maria Hokanson, Dairy Queen's Executive Vice President of Marketing, said Reese's Lovers Blizzards are in super high demand right now. Both cater to different kinds of people (chocolate lovers and peanut butter lovers), and if you aren't sure which flavor you prefer, picking one is bound to be — well — tricky.

According to the press release, Hokanson said:

The limited-edition Reese's Lovers Cups are flying off store shelves, making DQ restaurants a go-to destination to get a special Reese’s Lovers experience. Whether you’re a chocolate fan or more of a peanut butter fan, the only question left to answer is, which Blizzard Treat will you try first?

Dairy Queen's Reese's Lovers Blizzard Treats will be available for the entire month of June, according to the brand. Size-wise, you can get them in a mini, small, medium, or large. Per DQ, a small Blizzard sells for an average price of $3.59, but prices and availability of the treats may vary by location. If you want to skip the line, I strongly suggest ordering ahead of time on the DQ app.

Now, if you've ever gotten yourself a DQ Blizzard, you might wonder why they're always served upside down. According to the press release, this is because each Blizzard is blended so thick, that all of it should be able to stay in the cup, perfectly in tact. If they aren't served in that signature upside down fashion, the chain will give you a coupon for a free Blizzard at any participating location. The more you know, right?

Maybe you're a chocolate person, or you might be more of a peanut butter person. Either way, Dairy Queen's new Reese's Chocolate Lovers and Peanut Butter Lovers Blizzards let you eat more of whichever flavor you want. In the end, I'm good with either option. TBH, I'm about to take a peanut butter break right now, because this debate is seriously making me hungry.