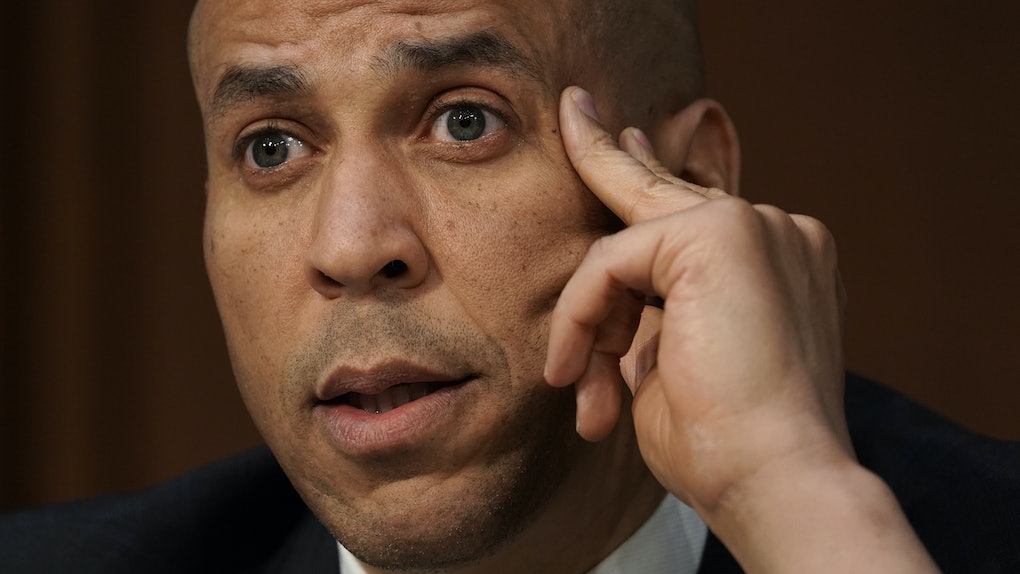 Sen. Cory Booker (D-New Jersey) wants to take down President Donald Trump. Booker tossed his hat in the 2020 presidential race earlier this year, which may or may not have been surprising to you, considering all the times he's lashed out at the president. If you're not familiar, here are a few of Cory Booker's quotes about Donald Trump that are seriously heated and reflect their history with each other.

They're interesting, too, because it wasn't always like this. Back in July 2016, Booker responded to mean comments made by Trump with love. Trump tweeted on July 25, 2016, "If Cory Booker is the future of the Democratic Party, they have no future! I know more about Cory than he knows about himself." According to CNN, the tweet was in response to a speech the senator gave to the Democratic National Convention, in which he commented on the president's views on immigration, and his comments about women and people with disabilities.

But instead of sending a jab back at the president, Booker got emotional. "I love Donald Trump," the senator said on CNN's New Day on July 25, 2016. "I don't want to answer his hate with hate. I'm going to answer it with love. I'm not going to answer his darkness with darkness."

Unfortunately, that didn't last long. Here are five instances where the senator laid out his apparent true feelings about Trump.

OK, so Trump doesn't have the best track record when it comes to women. Controversial comments aside, allegations of sexual misconduct have dogged him since the 2016 election cycle. Trump has denied the claims, and the official White House position is that his accusers are lying. The White House did not respond to Elite Daily's request for additional comment.

Booker is not here for it, and once suggested in December 2017 that Trump should step down from his position over the claims — just like Sen. Al Franken (D-Minnesota) did on Dec. 7, 2017 after facing pressure from Democrats over his own misconduct allegations (Franken apologized for some claims, and denied others).

In an interview with VICE News, Booker said:

I just watched Sen. Al Franken do the honorable thing and resign from his office. My question is, why isn’t Donald Trump doing the same thing — who has more serious allegations against him, with more women who have come forward. The fact pattern on him is far more damning than the fact pattern on Al Franken.

Say what you will, but he's right on the number of accusers. Franken has eight while Trump has nearly two dozen. But again, they've both denied the claims. Elite Daily reached out to the White House for comment on the statement, but did not hear back by the time of publication.

Booker seems to agree with the political observers who have long criticized Trump's rhetoric, saying it is "inflammatory" and "dangerous," fuels racial divides, and encourages political violence.

During an appearance on MSNBC's Hardball in March 2019, the congressman said Trump's language "hurts people," per NBC News. "His language is causing pain and fear. The way he's talking is making people afraid," he continued. Then Booker really went in, suggesting that Trump lacks "moral authority, saying:

We have a president that can’t stand up with any moral authority and remind us that injustice anywhere is a threat to justice everywhere, and it’s despicable.

The White House did not immediately respond to Elite Daily's request for comment on the remark.

So, Booker hasn't explicitly called Trump a racist, but he's gotten pretty close. While speaking at a campaign event on March 1, 2019, for example, the senator said the president uses race to "divide Americans."

He said, per Yahoo:

The White House did not immediately respond to Elite Daily's request for comment on the remark.

Booker also reportedly brought out receipts, highlighting FBI data showing that racial crimes spiked during Trump's first year in office, because nothing proves a point like those things.

Get Him Out Of Here.

It's no secret that several politicians want Trump removed from office. Impeachment talks only grew in the wake of the release of the Mueller report on the investigation into Russian election meddling. Though the report found no collusion, it did conclude that the Trump 2016 presidential campaign had expected to benefit from Russian election meddling and expressly noted that it did not clear Trump of obstruction of justice. The White House did not return Elite Daily's previous requests for comment on the report.

Special Counsel Robert Mueller elaborated on his findings in public remarks on May 29, telling the press that charging Trump with a crime was “not an option" because of a Justice Department policy prohibiting the indictment of a sitting president. "That is unconstitutional,” he said, in reference to possible charges. Mueller went on to say that “the Constitution requires a process other than the criminal justice system to formally accuse a sitting president of wrongdoing," which seemed to some as if he was calling on Congress to begin impeachment proceedings. As of publication, Trump has not been formally accused of nor charged with any crime, and no serious impeachment proceedings have begun. Booker (along with several others) quickly shared his support for the measure.

"Robert Mueller’s statement makes it clear: Congress has a legal and moral obligation to begin impeachment proceedings immediately," he tweeted on May 29.

Trump has framed his crackdown on immigration as an effort to slow illegal immigration at the United States' southern border, but Booker, among others, isn't convinced. In an interview with CBS News in April 2019, the senator questioned Trump's motives, saying:

If he was looking to solve a problem, he wouldn't be doing things to divide this country against itself. Beware of anybody that's trying to tell you to be afraid in the strongest country in the world, as opposed to showing our strength and our courage by pulling people together to find common sense solutions to solve this problem.

Well, at least he'll have a chance to make his case to replace Trump in November 2020. We'll see what happens.