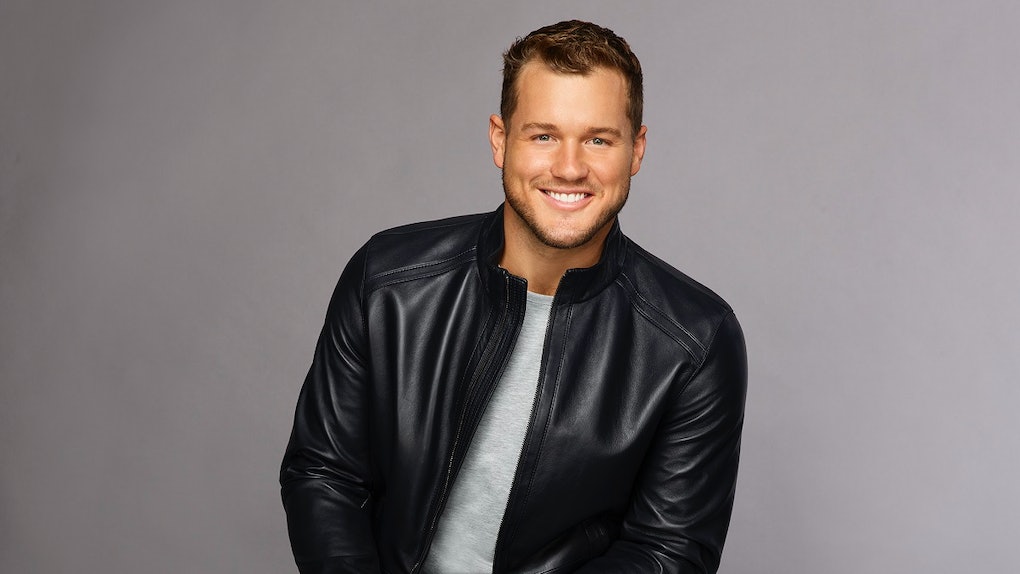 Colton's First 'Bachelor' Poster Is Here, So Get Ready To See A Lot More Of Him

Ready or not, here comes a new year of The Bachelor. We've had several blissful months of free Monday nights, but starting Jan. 7, Colton Underwood will officially kick off his stint as America's Bachelor. No matter what you think of the former NFL player, his season is certainly gearing up to be, as host Chris Harrison would say, "the most dramatic ever." Colton's first Bachelor poster is here, and it definitely hints at some intense rose ceremonies and group dates.

As per tradition, Bachelor press shots are never that flattering, but the lead's solo photos are usually more impressive than the array of contestant images resembling awkward elementary school pics. While the lineup of Colton's ladies has yet to debut (bring back those bios, ABC), our first look at Season 23 of The Bachelor comes via a tweet from Harrison. On Nov. 15, the host posted the season's official poster, showing Colton standing in front of a wall of roses and looking directly at the camera. The cheeky tagline reads, "What does he have to lose?" Well, that's a subtle way to introduce the season's inevitable "virgin Bachelor" angle. Will mentions of Colton's virginity become the Bachelor drinking game this year?

Rather than toting a rose in the poster, Colton delivers what Tyra Banks would call a smize, aka a fierce smile within his eyes. With his perfectly coiffed hair and new facial hair, the 26-year-old is clearly here to remind us that he's in this for the right reasons.

The poster appears as the filming of Colton's season winds down. Following the schedules of previous Bachelor seasons, Colton arrived at the mansion for filming in late September, and according to spoiler king Reality Steve, the final rose ceremony is allegedly taking place on Nov. 15. If Colton does propose to someone, can you imagine how that woman will approach the topic of a secret engagement at Thanksgiving dinner?

As he's currently still enclosed in his Bachelor bubble, Colton's social media activity has been quiet since September. Before he disappeared from our feeds, he met three of his contestants on The Ellen DeGeneres Show. After new Bachelorettes Sydney, Katie, and Annie answered questions related to him, dog lover Annie was the last woman standing and spent a few fleeting seconds with Colton when the game finished. In his interview with Ellen, Colton said, "I'm so ready. I'm so excited to not only meet my fiancée, my wife, but [also] the mother of my children and someone who I want to spend the rest of my life with."

His Bachelor in Paradise troubles aside (BTW, Tia Booth reportedly has a new boyfriend), Colton's intense mug hints that he's ignoring any haters and just focusing on finding love. As fellow Bachelorette alums Jason Tartick and Blake Horstmann remain fan favorites, Colton isn't exactly a beloved lead yet, but if he lightens up a bit, maybe any doubters will be proven wrong. Here's to you and your roses, Colton!