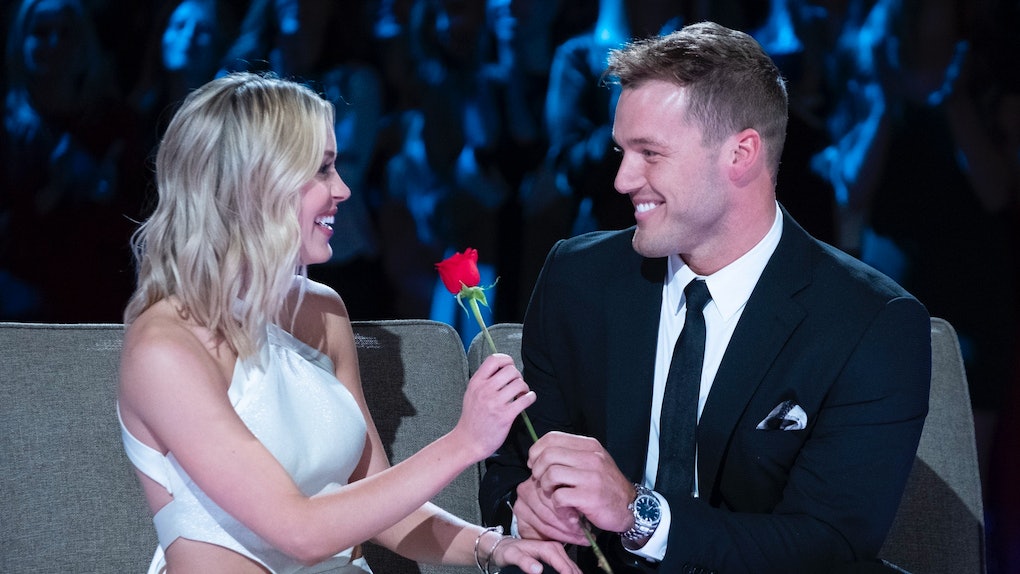 Just because they're not engaged doesn't mean they're not getting married sometime in the near future. In fact, Colton Underwood's quote about proposing to Cassie Randolph pretty heavily hints that we may be hearing wedding bells pretty dang soon. OK, it does more than hint. He literally bets that he's going to pop the question ASAP.

When chatting with Entertainment Tonight on the red carpet at the 54th Academy of Country Music Awards on Sunday, April 7, Underwood, 27, and Randolph, 23, dropped some major bombshells.

It all happened when the reporter asked if a proposal might be happening in the next year or so. Here's where things get really interesting, you guys. Randolph and Underwood both responded to the question by saying that "it might." And, as if that wasn't enough to get us all excited for an engagement in the near future, Underwood had to add this little gem of a statement: "Honestly, if I was a betting man I would say it would happen within the next year, yes."

Unfortunately, the only problem was that Randolph wasn't quite feeling Underwood as much as he was feeling her. So much so that she decided to dump him and leave the show. Underwood didn't take it super well.

“I was ready to end the show,” Underwood told People in March. “Once I had the conversation with Cassie, my mind was made up. I was either going to leave by myself, or I was leaving with her."

Underwood dumped the other women and decided to do everything in his power to get Randolph back. The two were able to work things out — they chose to stay together and take their relationship slowly. In other words, no classic Bachelor Nation engagement for them. Instead, they're just going to continue dating.

So, considering their back story, it's a pretty huge deal that they both seem so open to getting engaged within the year.

Even during their interview with People in March, Underwood seemed confident that the two would eventually be tying the knot. “She doesn’t have a ring on her finger yet,” Underwood told People during the interview in March. “But she will one day.”

He also took to Twitter last night to mention again that he wants to spend the rest of his life with her.

Underwood was super into his girlfriend last night, even posting a picture of himself snapping pictures of her on the red carpet with a disposable camera. "I’ll be your professional hype man for the rest of our lives," he wrote on Twitter along with the picture. "You’re beautiful."

"I was going to wait until west coast aired to post this, but I am too impatient. So here it goes! The secret is finally out!!! Colton, you truly have my heart ♥️ Walking into this experience, I honestly wasn’t sure that true love could come from it," Randolph wrote under a kissing mirror picture of herself and Underwood. "It hasn’t necessarily been the easiest road to get to where we are, but if that’s what it took to get here, then every single twist and turn has been undeniably WORTH IT. The last 4 months, just focusing on “us” have been amazing and you have become my best friend. You have shown me the purest, strongest love that any girl could ask for. You jumped a fence, took a risk, and challenged the “rules” to fight for us. I can’t even begin to describe how lucky I feel to have you by my side. I am so excited to see what is next for us in this new phase of our “journey”... I’d jump a thousand fences for you and “like, I know, I KNOW”😉 that I love you more than words, point blank♥️ps. you still give me butterflies 🦋"

"Whatever I write will never fully articulate the feelings I have for you," Underwood wrote with his announcement. "You are the most incredible person whom I have ever met, you have the kindest soul and the sweetest heart. You changed my life for the better and made this year the best year of my life. I can’t wait for our adventures ahead... I have my best friend. I have my girlfriend. I have my future fiancé. I have my future wife. But most importantly I have you. Let’s do this thing they call life... together... forever. I love you @cassierandolph"

Congrats to the happy couple! Here's to hoping they get married whenever they're both ready.

More like this
Zac Clark & Tayshia Adams Are Wedding Planning & I’m So Pumped
By Lydia Wang
Here's Where Colton Underwood & Cassie Randolph Stand After He Came Out On 'GMA'
By Corinne Sullivan
When Are Ariana Grande & Dalton Gomez Getting Married? Here's The Reported Tea
By Corinne Sullivan
Stay up to date