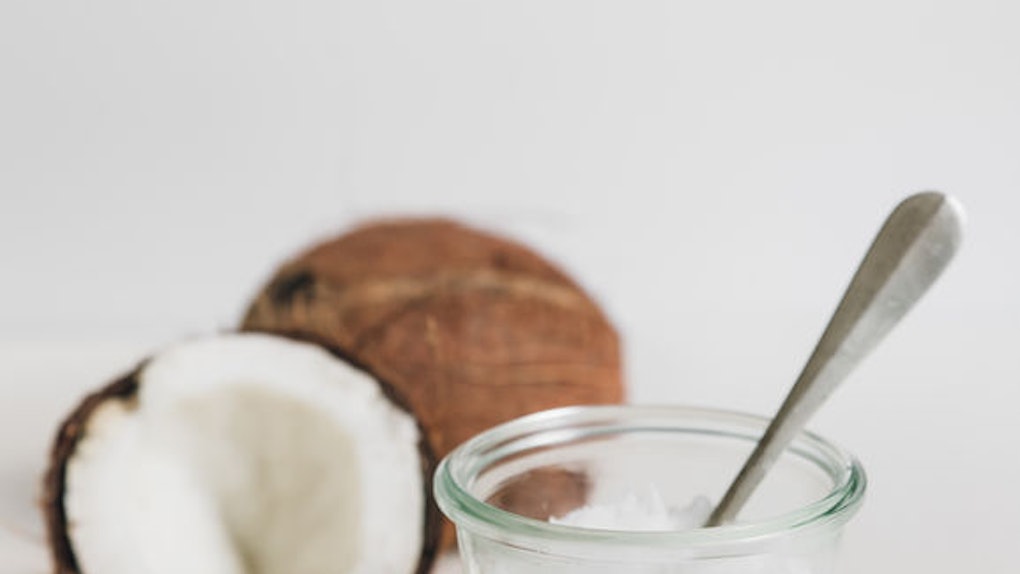 Coconut oil has been a staple for many of us who are into skin, and has become a cure-all of sorts for those who swear by it. But Harvard professor Karin Michels isn't buying into all the hype. Michels even referred to the oil as "pure poison" (oooh, harsh) during a lecture at the University of Freiburg in Germany. But in all fairness, she was referring to the product being consumed, adding that it's "one of the worst foods you can eat." But with so many conflicting arguments about it, this leaves many of us wondering, is coconut oil good or bad? Unfortunately, there's no straight answer, since it all depends on what exactly you're using it for.

According to Business Insider, in terms of using coconut oil in food, Michels, who teaches at the department of epidemiology at Harvard's T.H. Chan School of Public Health, asserted in a YouTube video that recently went viral that there are currently no studies proving that there are any major health benefits associated with ingesting coconut oil — but she did add that the saturated fatty acids found in the oil can lead to clogged arteries.

Now, while coconut oil lovers may take offense to Michels' statements, the professor definitely isn't making any false claims. In 2017, the American Heart Association issued a warning against diets high in saturated fat, which reportedly makes up 82 percent of coconut oil, according to Heart.org. Since coconut oil contains high levels of saturated fat, the advisory suggests ingesting it leads to a rise in LDL — also know as bad cholesterol — levels, which can eventually lead to heart disease and other cardiovascular ailments.

"What some people don’t realize, because instead of doing their research, they followed a health trend, is that coconut oil actually has more fat in it than lard or butter," Cardiologist and Founder of Manhattan Cardiology, Dr. Robert Segal, told ABC News. "The misconception that coconut oil is healthy is likely due to a swell of marketing efforts from the coconut oil industry, or because people are confusing coconut oil benefits with those of coconut water."

In 2015, the FDA reportedly shut down claims that coconut oil could be considered as "healthy," since it contained more than 15 percent of calories from fat. The group also cautioned against using it for treating issues like "gastroenteritis, ringworm, hemorrhoids, ear aches, joint and muscle inflammation, and heart disease." Instead, the FDA recommends using pharmaceutical products that have undergone extensive clinical trials to treat these types of medical conditions.

But don't throw away your stash of coconut oil just yet, because while it may not be the best to eat, it does have great benefits for the body when used topically.

"What may not be of benefit to your heart, still can help your skin when applied topically," Dr. Joshua Zeichner, Director of Cosmetic and Clinical Research at Mount Sinai Hospital, tells Elite Daily. "The very fact that its harmful to your health in general when ingested can actually be helpful when applied topically to your skin. These natural fats help form a protective seal over the skin to calm inflammation and help repair a damage skin barrier."

But coconut oil isn't just great when applied directly to the skin, Dr. Zeichner suggests. He also says that he would recommend using the product for the hair and nails as well.

Back in 2013, New Beauty reported that, because of coconut oil's chemical structure, it works to penetrate the hair shaft, which can help to strengthen the hair and give it more flexibility. This can be a game-changer for anyone who is currently dealing with breakage and split ends.

In addition, celebrity manicurist Skyy Hadley told Byrdie why she loves using coconut oil around the nail area, especially massaging it into the cuticles. "You can certainly go as long as you want without washing coconut oil off your cuticles — the longer, the better," she said. "Doing this will help strengthen your cuticles, moisturize the skin around your nails, and get rid of hangnails."

However, if you're ready to part ways with the natural oil, or you're just looking for a less greasy option, Dr. Zeichner recommends using lotions that contain ingredients like oat extract that are just as moisturizing, but won't leave behind a residue. "Vaseline Intensive Care Essential Healing Lotion ($3.49, target.com) is light, easy to spread, and does not leave the skin feeling greasy," he says.

So it turns out coconut oil may not be "pure poison" after all — as long as you're using it in effective ways.