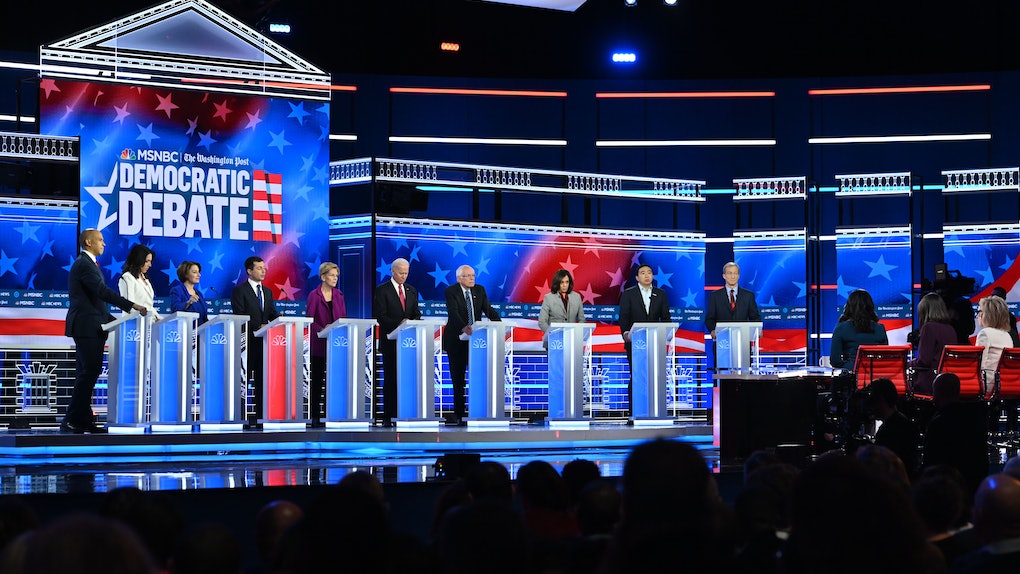 Climate Change Came Up At The Nov. 20 Debate, But Some People Aren't Happy

On Nov. 20, ten Democrats took the stage in Atlanta for the fifth Democratic debate of the 2020 election season, and things are definitely heating up. The candidates discussed everything from their health care plans to the impeachment inquiry into President Donald Trump. Amid heated discussions about racial justice and taxing wealthy Americans, one moment that stood out was when candidates were finally asked about climate change at the Democratic debate. It was something many people had wanted to see, but for some, the questions didn't go far enough.

Debate moderators at the previous Democratic debates faced significant criticism after not giving enough attention to climate change. After Washington Gov. Jay Inslee, who made climate change the centerpiece of his presidential campaign, dropped out of the 2020 race in August, activists and progressive lawmakers called on debate moderators to pay more attention to the ongoing climate crisis. The moderators on Nov. 20 — the all-female team of Rachel Maddow, Andrea Mitchell, Kristen Welker, and Ashley Parker — earned praise for getting in a question. Unfortunately, many social media users didn't seem satisfied with the amount of time that the moderators, or the candidates, spent on climate change during the debate.

Wednesday night's debate quickly cycled through a variety of topics, ranging from wealth taxes to abortion. Climate change was not exempt from this rapid-fire line of questioning. When the moderators asked the candidates what they would do to address the climate crisis, Hawaii Rep. Tulsi Gabbard blamed "hyper-partisanship" for the lack of progress on that front, while billionaire Tom Steyer suggested he was the only Democratic candidate who would make climate change his priority as president. This prompted former Vice President Joe Biden to criticize Steyer for his past investments in coal mining, and Steyer defended his record by saying that he has since dedicated much of his money to environmentalism.

Twitter users were quick to point out that the debate spent under 10 minutes focusing on what has rapidly become an international existential crisis. During the debate, Vermont Sen. Bernie Sanders pointed out that we no longer have a significant amount of time to combat climate change, contradicting the long-term nature of the moderators' original question. In October 2018, a United Nations report found that there were only about 12 years left to counter the worst effects of climate change.

"If we don't get our act together within the next eight or nine years, we're talking about cities all over the world, major cities going underwater," Sanders said, noting that the risk of creating hundreds of millions of climate refugees if world leaders don't take swift action.

During this debate, as in previous ones, candidates went back and forth on issues like wealth taxes, abortion, and more. But the notable lack of emphasis on climate change drew a great deal of pushback, especially as the primaries draw closer. The stakes were particularly high during this debate, and many voters do not seem satisfied.

The debate comes as many formerly hopeful candidates are dropping out. On Nov. 1, former Texas Rep. Beto O'Rourke, who passionately defended sweeping gun control policies, announced that he was dropping out of the race. Then, former HUD Secretary Julián Castro failed to qualify for the fifth debate, though he gained a significant amount of attention on Twitter for sharing his own responses to the debate questions. On Nov. 14, former Massachusetts Gov. Deval Patrick announced that he would be entering the race, just as former New York City Mayor Michael Bloomberg suggested that he might run, too.

So when the ten candidates who did qualify for Wednesday night's debate took the stage, there was a great deal at stake. As the Democratic presidential primary continues to heat up, we can expect to see voters putting more pressure on their candidates of choice — because ultimately, only one of the people on the debate stage will walk away with their party's nomination.