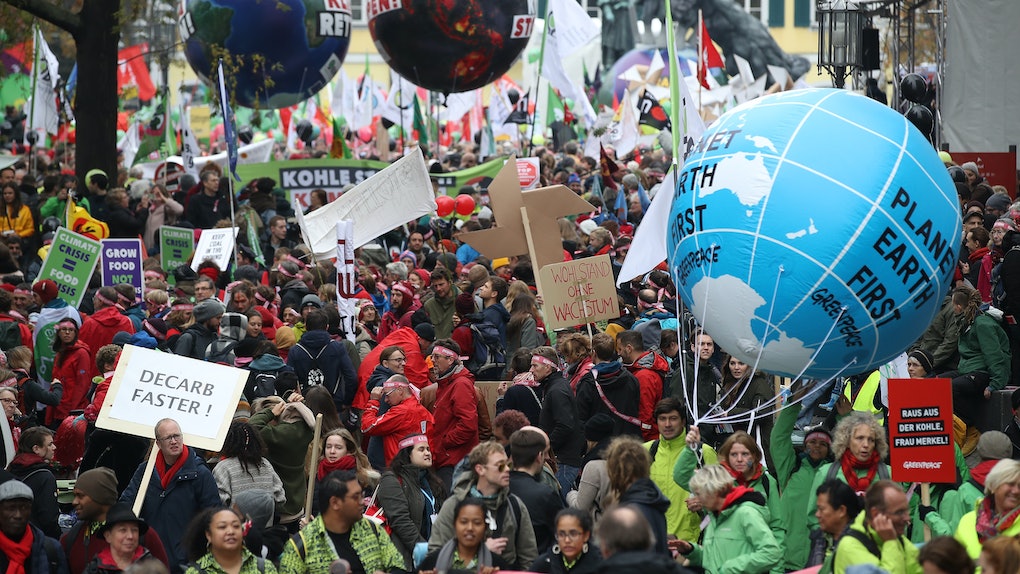 The past few months have certainly made a number of people feel uneasy, and the UN report on climate change isn't helping ease our minds at all. According to a recent study, we only have a few precious years left to battle against a possible climate catastrophe. So, it's time to take action y'all.

On Monday, Oct. 8, the United Nations' Intergovernmental Panel on Climate Change released a new report announcing that there's only 12 years left to limit climate change and describing the increasing risks of extreme heat, drought, and floods. According to The New York Times, the report, written by panel of 91 scientists from 40 countries, concluded that a huge climate crisis could arise as early as 2040, with risks of even worse food shortages, wildfires, and the total extinction of coral reefs. Through their research, scientists found that the world's temperature will rise to alarming numbers if greenhouse gas emissions continue at their current rate. According to researchers, if climate change is left unchanged, then the lasting damage to Earth would cost around $54 trillion.

The report indicates that massive work is needed to keep global warming to be kept to a maximum of 1.5 degrees Celsius (2.7 degrees Fahrenheit), the limit beyond which consequences grow even more dire. The Guardian points out that a 2 degrees Celsius (3.6 degrees Fahrenheit) increase in global temperature, there are likely to be drastic effects on habitats for insects which pollinate food crops, and 99 percent of ocean coral would likely die off. The planet is currently 1 degree Celsius (1.8 degrees Fahrenheit) warmer than pre-industrial levels, according to the publication.

In order to fight against climate change, a few important changes need to be made, such as a drastic reduction of carbon dioxide emissions. Greenhouse gases will need to be reduced by 45 percent by 2030 and 100 percent by 2050, per the report, and coal-based energy would have to drop from about 40 percent of energy use to between 1 and 7 percent, with the difference made up by renewable energy like solar.

As the second largest greenhouse gas emitter in the world, this may be difficult for the United States. In June 2017, Donald Trump shocked everyone when he announced that the U.S. would withdraw from the Paris climate accord, a global deal intended to reduce greenhouse gasses in order to limit risks of global warming. The 2016 Paris climate talks, where the agreement was originally made, was also the source which commissioned the UN report. According to The New York Times, the State Department accepted the report's summary for policymakers, but in a statement to the publication said that "acceptance of this report by the panel does not imply endorsement by the United States of the specific findings or underlying contents of the report." The State Department did not immediately reply to Elite Daily's request for comment about the report.

In response to the U.S. leaving the Paris accord, President Barack Obama issued a public statement in June 2017 condemning Trump's decision, but noted that he still has faith other nations will protect our future. A part of the statement read,

The nations that remain in the Paris Agreement will be the nations that reap the benefits in jobs and industries created. I believe the United States of America should be at the front of the pack. But even in the absence of American leadership; even as this Administration joins a small handful of nations that reject the future; I'm confident that our states, cities, and businesses will step up and do even more to lead the way, and help protect for future generations the one planet we've got.

Obama wasn't the only person who disapproved of Trump's withdrawal. Following the United States' withdrawal, a number of cities including Montreal, Boston, Mexico City, and Berlin showed their support for the Paris climate change accord by illuminating national monuments with green light.

The future may not be certain right now, but there's still tons of ways we can do our part help fight against climate change. Stay green, everyone.