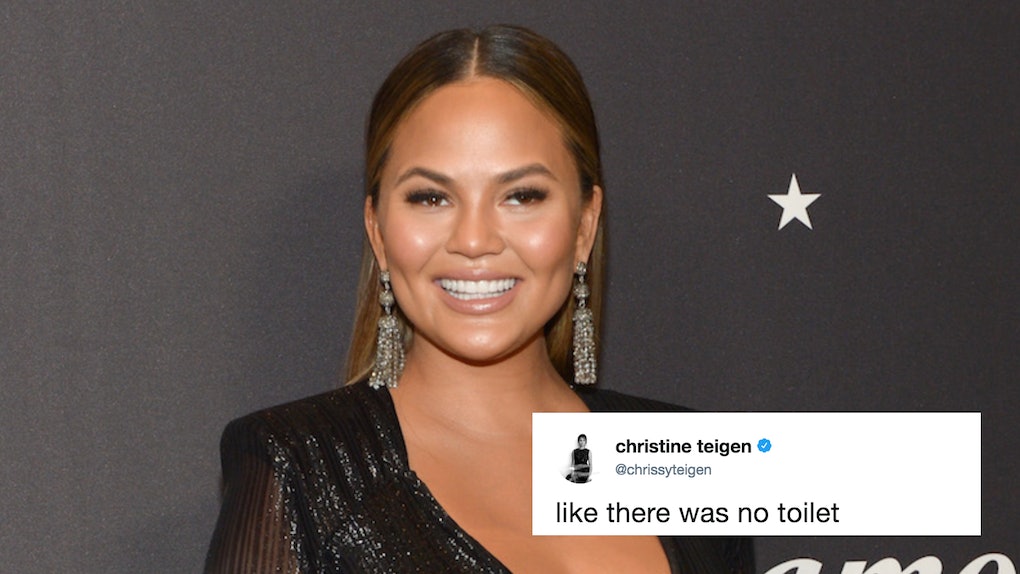 Oh, Chrissy Teigen. Chrissy, Chrissy, Chrissy. You're wild, girl. The pregnant supermodel is living her best life while rocking her baby bump and enjoying the small things. She's tweeted about all kinds of stuff — things like her favorite candy, watching Vanderpump Rules, and of course, her peeing habits. Obviously. She recently had a hilarious bathroom situation and gloriously shared it on Twitter for all of us to enjoy with her. Chrissy Teigen's tweets about her missing toilet will make your whole day. Thanks, babe.

Look, you don't have to be pregnant to sometimes lose control of your bladder. Teigen described a situation we all have been in. You really, REALLY have to go, and as soon as you get near the toilet, your brain sends your body signals that it's safe to let loose. Or at least it should be safe, but that was not Teigen's reality.

She posted the hilarious play-by-play of her bathroom catastrophe, explaining,

I got home today and ran to go peepee and you know when you’re so close to the bathroom so you kind of release because you know you’re about to pee, well I did that and my toilet was gone.

I know, you're probably thinking, "Wait a minute, Chrissy. What do you mean your toilet was gone?"

Don't worry, she clarified. She posted this super literal photo of her bathroom sans toilet. She wrote, "Like, there was no toilet."

A-ha. Now we see what you mean.

Obviously, fans are here to help Chrissy out and a nationwide search for her toilet is underway.

Even musician Questlove got in on the action, potentially starting a toilet search movement.

We're here to help, Chrissy! Whatever you need!

It seems she and hubby John Legend are always getting themselves into sticky situations. Recently, they were stuck on a flight from hell. A third of the way through an 11-hour flight to Tokyo, Teigen and Legend's plane had to turn around and head back to LAX. This is because a passenger on the flight actually had a ticket for a different airline.

Obviously, Teigen live-tweeted the whole thing, which we know was a shitty time for her but a wonderful time for us. This is my favorite tweet from the whole journey:

I will officially be naming my first child "Beedoop."

Teigen hilariously suspected it was actually a security conspiracy playing out before her eyes, and that the feds were disrupting her updates and trying to keep her quiet. Lol.

A rogue Tokyo flight? A missing toilet? Coincidence? I THINK NOT.

More than anything, we're just so happy to see Chrissy still has her sense of humor and seems to be doing well during her second pregnancy. Teigen was open about her struggle with postpartum depression after her first baby, Luna, and has been notoriously vocal and candid about her experience as a mother in general.

She told Refinery29 in April,

There's no better feeling than being out of it [postpartum depression]. Of course, you have your good and bad days. I just had a bad day a couple days ago. But the bad days do not outweigh the good days anymore. Just when you think it's really really bad, it's going to get better. So hopefully, if you're going through something tough you can find some peace in knowing that.

Dang, Chrissy. You're the freaking best.

We hope you find your toilet and are keeping our eyes out, too. Good luck and godspeed.