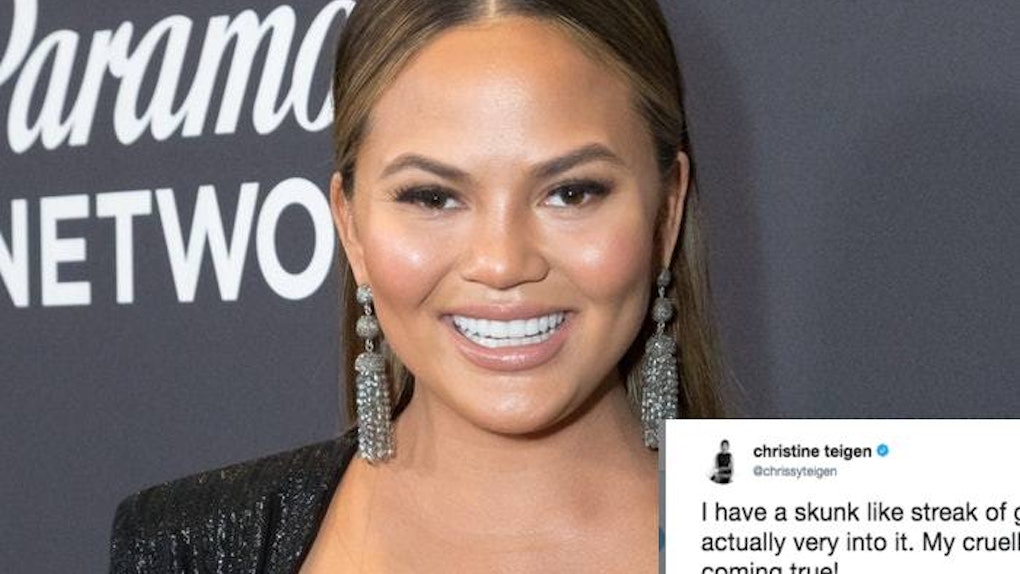 The winter Olympics might be right around the corner, but today it’s all about going for the silver. Chrissy Teigen’s Tweet about gray hair has launched the internet into a giant celebration embracing the so-called secondary metallic hue, and I could not be happier. Not only is Teigen one of my favorite people to follow on social media (even though she stole my future daughter’s name for her own excruciatingly adorable Luna baby — I’ll get over it), but she’s also shut down the idea that aging and visible signs of it are a negative thing.

In a world where impossible beauty standards seem to be based around the idea that the fountain of youth is a real and accessible thing, this message could not be more important. For the 2017 September issue, Allure did something monumental for the women’s magazine industry: they announced that they would no longer use the term “anti-aging” on their website or within their pages, and called on the rest of the industry to follow suit. As one of the leading beauty publications in the game, this was huge. Just check out what Allure’s editor-in chief, Michelle Lee, had to say on the issue.

“This issue is the long-awaited, utterly necessary celebration of growing into your own skin — wrinkles and all. No one is suggesting giving up retinol. But changing the way we think about aging starts with changing the way we talk about aging. With that in mind, and starting with this issue, we are making a resolution to stop using the term ‘anti-aging.’ Whether we know it or not, we’re subtly reinforcing the message that aging is a condition we need to battle—think antianxiety meds, antivirus software, or antifungal spray.”

Which, of course, it’s not. As the article later points out, some people don’t even get the chance to age. Wrinkles and veins and gray hairs all symbolize a life well lived, and they are a privilege to acquire. So why is America so dead set on eliminating them? Or rather, why do American beauty standards tell women, specifically, that they need to eliminate them to be beautiful? As someone who thinks present-day Jane Fonda is one of the most gorgeous women alive, I think it's total BS. And as someone who witnessed her mother get a face lift, only to gravely regret doing so years later once she realized where her true beauty stemmed from, I think it can also be incredibly psychologically damaging.

Which is why it's so incredible that publications and now celebrities alike are making a point of not only accepting, but embracing signs of aging.

Yesterday, Chrissy Teigen posted a Tweet about loving her "skunk like" hair, even going so far as to compare herself to an iconic Disney villain:

And naturally, the internet went wild for it. Women came out in droves to profess their love of their own silvery streaks, some of whom had been rocking theirs since childhood:

It's beyond empowering to see women coming together to support one another and reaffirm what is undeniably true: that every single woman is beautiful in her own way and that no cosmetics advertisement or magazine editorial should ever make us feel like we need to look a certain way to be so. Teigen will clearly be teaching this to her kids and I hope her words inspire others to do so as well.

Silver is one of the most ethereally stunning colors in existence (many women are coloring their hair metallic silver on purpose) and I think it's quite magical that it comes out of our head as we grow older. (I think the woman in the last Tweet above is my spirit animal!) As someone whose name literally means "silver" in Welsh, I am living for the day when my own unicorn strands begin to grow in and match it.