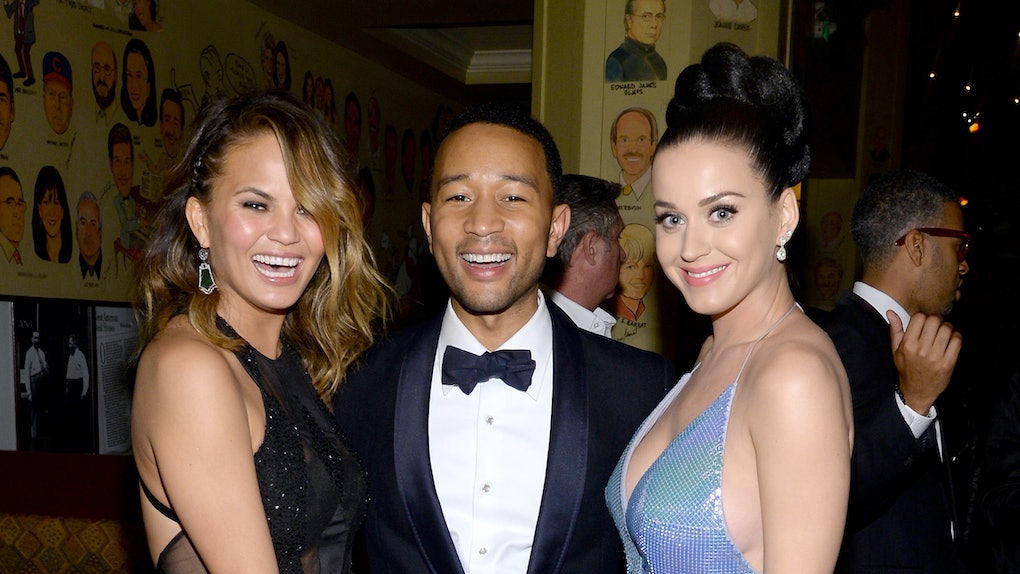 Chrissy Teigen's experience at the Celebrating America inauguration special was unforgettable, to say the least. From supporting John Legend's performance of "Feeling Good" and taking a family photo in front of the Washington Memorial, to getting followed by President Joe Biden on Twitter and embarrassing herself in front of Katy Perry, so much went down that day for Teigen. On Tuesday, March 9, the star appeared on The Tonight Show Starring Jimmy Fallon to retell her biggest (and most hilarious) memory. Prepare to have second-hand embarrassment over Chrissy Teigen's story about offending Katy Perry at Biden's inauguration because it's awkward AF.

Here's what happened: Teigen attended the inauguration event on Jan. 20 with her kids Luna and Miles because Legend was invited to perform. Perry was also on the lineup, and although she and Teigen are friends, the Cravings author admitted being nervous to see her again because, you know, she's Katy Perry. "I was so scared because we ran into Katy Perry after, and I always say dumb things," Teigen recalled of that night.

Of course, to make matters even worse, Teigen accidentally said something Perry totally misunderstood. "I always get so nervous and say faux pas. I hadn't seen Katy for so long and I was like, 'Oh I typically hate fireworks but that was amazing. That was beautiful," Teigen said. Of course, she was talking about the literal fireworks during Perry's performance, but the singer thought she meant her song "Firework." "I wanted to die, I felt so bad. I was like, 'No, no, no, not 'Firework,'" Teigen said.

Now that you know what really happened behind the scenes, you'll never see Perry's performance of "Firework" at the inauguration special the same ever again.

Teigen's eventful night didn't stop there, because when she got home, she discovered Biden had followed her on Twitter. The star only had one thing to say as a response: "OH MY GOD!!!!!!!"

It was fun while it lasted, but a few weeks later, Teigen asked Biden to unfollow her, so she could "flourish as me" again on social media. When he complied, Teigen let out a vulgar reply. "B*tch f*ck sh*t suck the d I am FREE!!!!!!!!!!!!" she tweeted on Feb. 23.

Teigen's story about embarrassing herself in front of Perry just proves once again she's the most relatable celebrity out there.