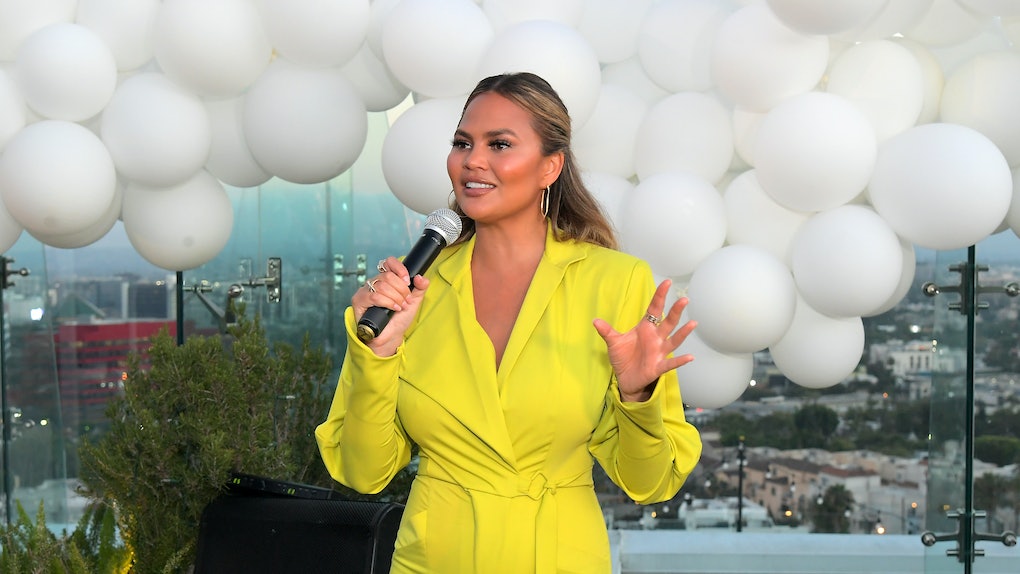 In my honest opinion, Chrissy Teigen might just take the cake as one of the most relatable celebrities out there. The Lip Sync Battle host is no stranger to sharing the often hilarious happenings of her daily life with her followers and fans, so it wasn't surprising when she took to Twitter on Saturday, Aug. 17 to detail an unfortunate incident that occurred while she was vacationing in Utah. Prepare to do a double take, because Chrissy Teigen’s photos of her swollen lips are a lot to handle. Here's what all went down.

If you follow Teigen on Twitter and are a regular reader of her candid, LOL-inducing musings on the social media platform, you might have been in for a shock when the star took to Twitter on Saturday night to share photos that look like they're straight out of the Kylie lip challenge. Before posting the shocking photos, the mom of two warned her followers that she was suffering from adverse reactions to altitude sickness, which occurred when she visited Utah for the wedding of her friends Meghan Mackenzie and Luke Dillon.

"Very upset and saddened that my own birth state, Utah, has chosen to poison me with terrible altitude sickness," Teigen shared, beginning a string of tweets about the flare-up. She followed up her initial message with a close-up of her swollen lips to show her followers exactly what she was talking about.

Teigen continued, "Did u know angioedema can be triggered from altitude sickness? learn something new every day! my lip about to explode. goodbye world." According to WebMD, Angioedema "is a reaction similar to hives that affects deeper layers of your skin" and commonly impacts areas like your lips, cheeks, or eyes with symptoms like excessive swelling, redness, welts, and pain in the impacted area. In other words, it looks and sounds like it's a pretty unpleasant experience.

Numerous people took to the replies to voice their thoughts on the double take-inducing transformation. While some compared the inflammation to the appearance of extreme lip fillers, others like Jessica Alba, voiced their condolences and revealed that they'd had the same thing happen to them.

Teigen continued to update her followers on the progress of her symptoms over the course of the night, complaining of her bottom lip, "It's so big it’s shiny and hard like glass."

She later shared a video where she can be seen struggling to speak from her puffy lips, which she captioned, "This is premeditated murder if you ask me."

"Luke, Meghan, why have you chosen to get married in a place which would try to destroy me?" she quipped.

Jokes aside, angioedema can be a life-threatening condition if it impacts your tongue or your throat, potentially blocking your airway, so fans were happy to see her later take to her Instagram Stories to share a video of her inhaling oxygen from a can to help with the swelling. "Oh yeah, that's good," she told the camera, showing that her lips had gone down a bit.

It's been a wild ride, but here's hoping that the swelling completely subsides sooner rather than later and Teigen can go back to her regular social media schedule of hilarious quips and too-real tweets.