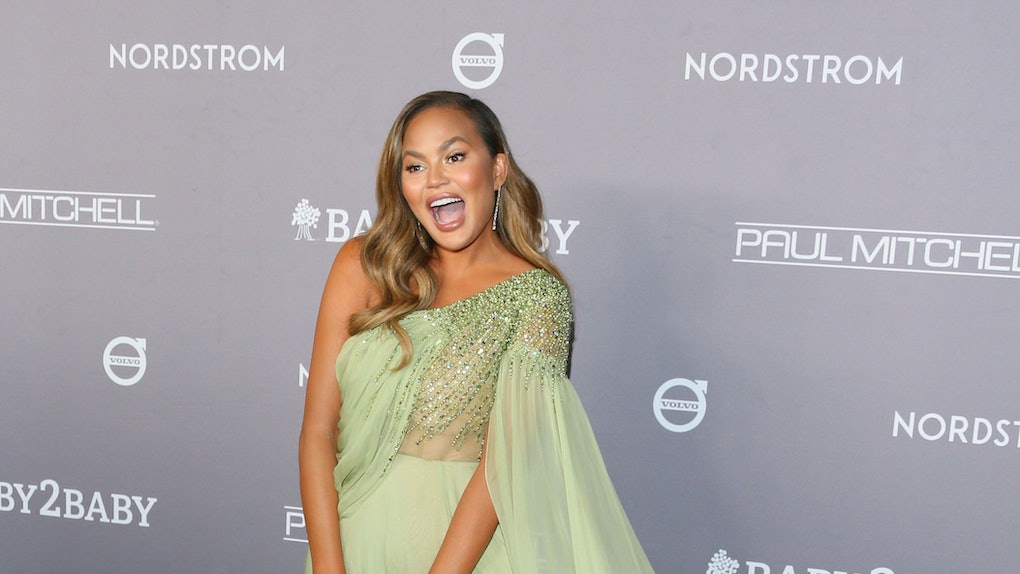 Chrissy Teigen might have authored a few cookbooks, but even she isn't immune to mishaps in the kitchen. On Tuesday, Nov. 26, the former SI Swimsuit model brought some of her trademark humor to the table when a certain fruit-based arrangement that she made for her daughter Luna didn't go quite as planned. Luckily for us, the star documented the whole thing on Twitter, and Chrissy Teigen’s photo of her “hideous” Thanksgiving fruit turkey, which sports some intense false eyelashes, is pretty much guaranteed to leave you in stitches.

On Tuesday Nov. 26, ahead of Thursday's Thanksgiving festivities, Teigen took to Twitter to share that she was ambitiously attempting to craft a turkey solely out of different kinds of fruit for her daughter Luna's school potluck. Unfortunately, hijinks ensued, and the finished creation didn't didn't look quite as 'Gram-worthy as she'd originally planned. However, true to form, the comedienne took it all in stride and decided to bring her followers along on every step of the culinary journey.

Judging from her photos, Teigen attempted to construct the bird's body out of cantaloupe before affixing a pear as a head (with a beak made out of a pickle and eyes made from marshmallows and blueberries). Things hilariously took a turn for the worse as Teigen added more fruits to the quirky-looking creation, and supplied audiences with a steady stream of commentary to go along with the updates.

"Please stop being jealous of my turkey," Teigen quipped in a subsequent post, before she shared a video of herself putting fake eyelashes on her fruit creation.

"I mean, she's beautiful," she told the camera, giggling. "She looks like she's had a rough night."

After the fruit turkey survived the ride to the school, the transformation really picked up wind, as Teigen then affixed a festive green hat and a full plume of fruit skewer tail feathers made out of blackberries, kiwis, raspberries, bananas, and grapes.

Along with a laughing emoji, the mom-of-two concluded her thread, writing, "She’s hideous I love her."

It was a wild ride from start to finish, and Teigen's fans took to Twitter to weigh in and offer their thoughts on the final product. One called it the stuff of "nightmares" while others compared it to Scrat from the film Ice Age.

Only time will tell whether Teigen attempts any other fruit-based experiments on Thanksgiving Day, but I'm sure that her followers will be keeping an eye on her Twitter account in the meantime.