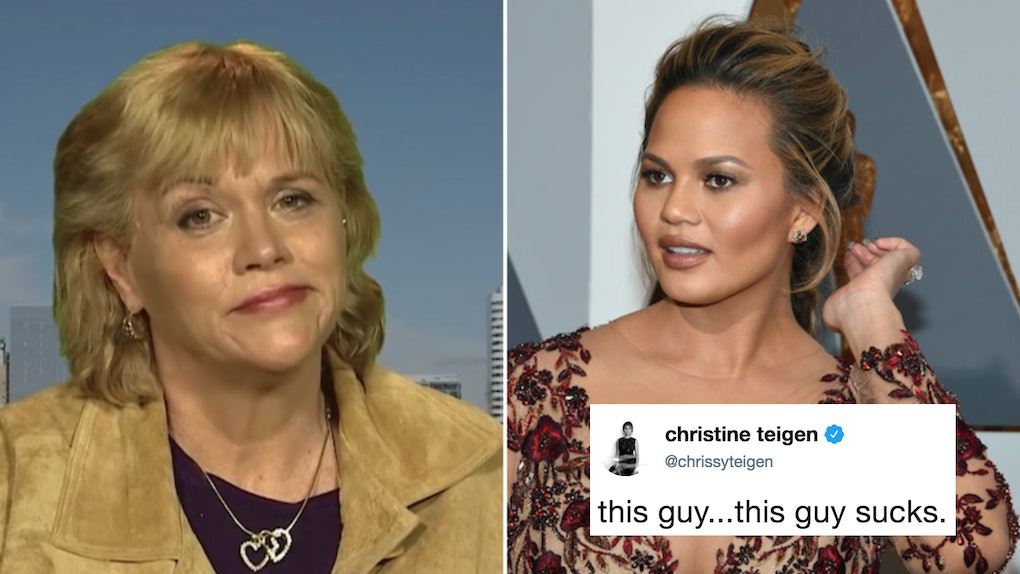 Things continue to get more and more complicated between Meghan Markle, Duchess of Sussex, and her family back in the States. So much so, supermodel and mega-celebrity Chrissy Teigen is somehow now getting involved. (I know, it took me a minute to catch up, too.) Teigen tweeted about Meghan's father, Thomas Markle, suggesting he just "let his daughter be happy" after his most recent bizarre interview with The Daily Mail. However, Chrissy Teigen's comments about Thomas Markle's interviews set off Meghan's half-sister, Samantha Markle, causing her to reportedly lash out on her own Twitter account and call Teigen a "pudgy airhead" who "sucks." Elite Daily reached out to Samantha's team for clarification on her tweet, but did not hear back by the time of publication.

Everybody with me so far?

It all went down over the weekend of July 28 and made my Monday morning infinitely more interesting, if not slightly more distressing. Teigen was prompted to comment on the now infamous family feud after Thomas Markle said a whole bunch of sh*t (like nine hours worth of sh*t) to The Daily Mail. In his interview, he talked about all kinds of things including, but not limited to, Meghan cutting him out of her life for good, his opinions on how the late Princess Diana did in her position, and his fear of being kidnapped in Mexico thanks to all the press surrounding him. It's a long, rambling read highlighted with a palpable air of desperation.

In a dramatic moment, Thomas stated, "[It would be] easier for Meghan if I died." He added,

Everyone would be filled with sympathy for her. But I hope we reconcile. I'd hate to die without speaking to Meghan again. What's sad is that sometime in the next year Meghan and Harry will have a baby and I'll be a grandfather. And if we're not speaking, I won't see my grandchild. How tragic is that — to deprive a child of its grandfather because I said a few things critical of the Royal Family?

Teigen caught wind of this piece, among some other poignant rants, and shared her thoughts on Twitter. She posted screenshots of the interview with the caption, "this guy...this guy sucks. what is wrong with him? let your daughter be happy, please. this is embarrassing."

She took to her own private Twitter account to defend her father and name-call Teigen. (Hot tip from me to you, Sam. I would not come for Chrissy Teigen. Her fans' reach is deep and wide and all around you even if you can't see it.) According to Cosmopolitan, Samantha wrote:

So this pudgy airhead @Christinetiegen Who knows nobody in the family is opening her pie hole? 'This guy' is our father and deserves a lot of respect,.. you are the one who sucks.

Hm, it's interesting Samantha is the one bringing up "respect" here. In fact, she recently admitted to "cashing in" on her sister's fame, which some might argue is the opposite of respectful and more like taking advantage of. During an interview with Good Morning Britain, Samantha defended her comment saying, "we all have to survive, money makes the world go round."

Man, if only I could be a fly on the wall wherever Chrissy Teigen is right now reading Samantha's comment.

It gives me chills just thinking about it.