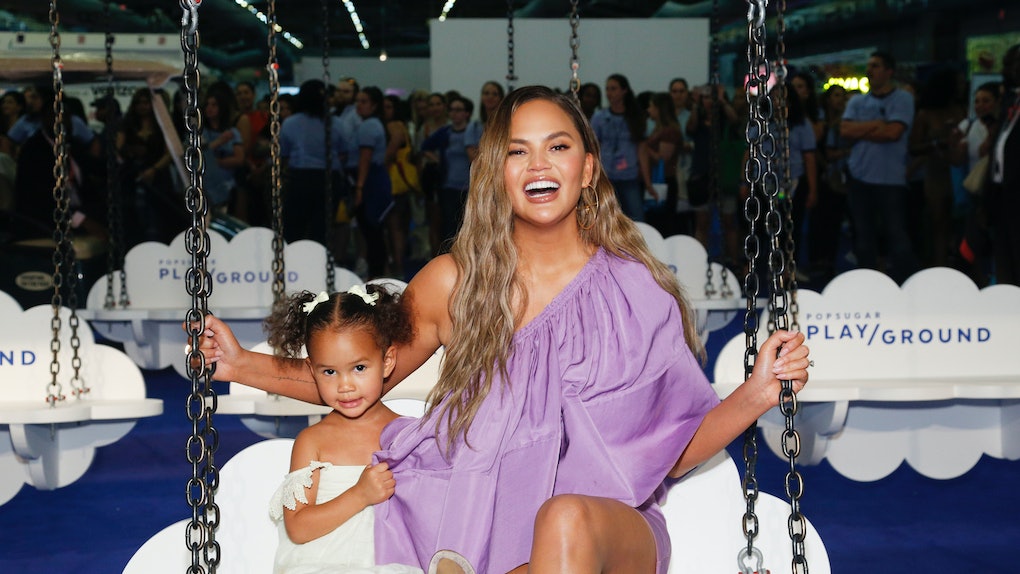 Chrissy Teigen's Childhood Photo With Her Mom Is Freaky, Since She Looks Exactly Like Luna

OK, internet. We all well know that little Miles Stephens looks exactly like his dad, John Legend, but have we talked about how Luna is the spitting image of Chrissy? Because, uh, folks, Chrissy Teigen's childhood photo with her mom is literally Luna's face. Teigen's caption on the post says "we came. to slay," and clearly Luna is included in that "we!"

Ever since he was born, Teigen and Legend have been posting photos showing just how much their son, Miles, looks like Legend. His face — with the exception of his nose (he got Teigen's nose for sure) — is basically copied and pasted from his dad's, but I can't believe how long it's taken me to notice just how much Luna looks like a mirror image of Teigen!

Teigen posted the throwback photo to her Instagram on Aug. 14 in all of its '90s glory. It shows a younger Pepper Teigan wearing a brown, printed button-down shirt with high-waisted shorts and sunglasses (iconic, honestly), and it shows a young Teigen wearing a pink and yellow polka-dotted dress. The look on Teigen's face in the photo is going to be one you'll recognize immediately, because it's literally a face Luna makes all the time.

Legend commented on the photo saying what we're all thinking.

Fans of the family are saying they want to see more side-by-sides of Teigen and Luna at the same ages now.

"The time has come Chrissy, we need side by sides of you and Luna at the same age," one fan said. We need this, Chrissy!! We have plenty comparing Miles and Legend's faces. Give us Teigen and Luna!

Also, it's necessary to note that Pepper's comment on Teigen's post said, "One of this day Princess’s Diana hair cut will make it come back! ❤️❤️😂😂😂." An iconic woman.

She posted the above photo of Luna and Miles sitting at a table together that shows her and Legend's personalities in a nutshell. Luna has a stank face on like her mom frequently does, and Miles is all smiles. The post is fittingly captioned, "me and John."

Teigen also gave us one side-by-side of her and Luna, just not at the same ages.

The photo shows Luna making the same cringing face Teigen made during an award show a couple of years ago that has since become a legendary meme.

Teigen posted a photo of little Miles sitting in a laundry basket back on March 17 and said, "I know you all think he looks like john but that is my nose, can we at least acknowledge that." We can, and we will, Chrissy.

Of course, we've already gotten a slew of John and Miles content that shows just how much they look alike.

Legend posted this shot of him and Miles wearing matching black sweatshirts on March 28 and said, "Twins."

He, no doubt, was referring both to their clothes and also their faces.

Legend also posts funny update photos copying Miles', even mimicking his son's pose from one of the pictures.

The caption reads, "John, you are the father," which yes. Legend could never deny Miles as his kid even if he wanted to.

Then, of course, there was the photo of baby Miles and baby John laying on mustard-colored blankets.

"Miles inherited my love for lying on mustard colored blankets," the caption said. Their faces are literally the same. Literally.