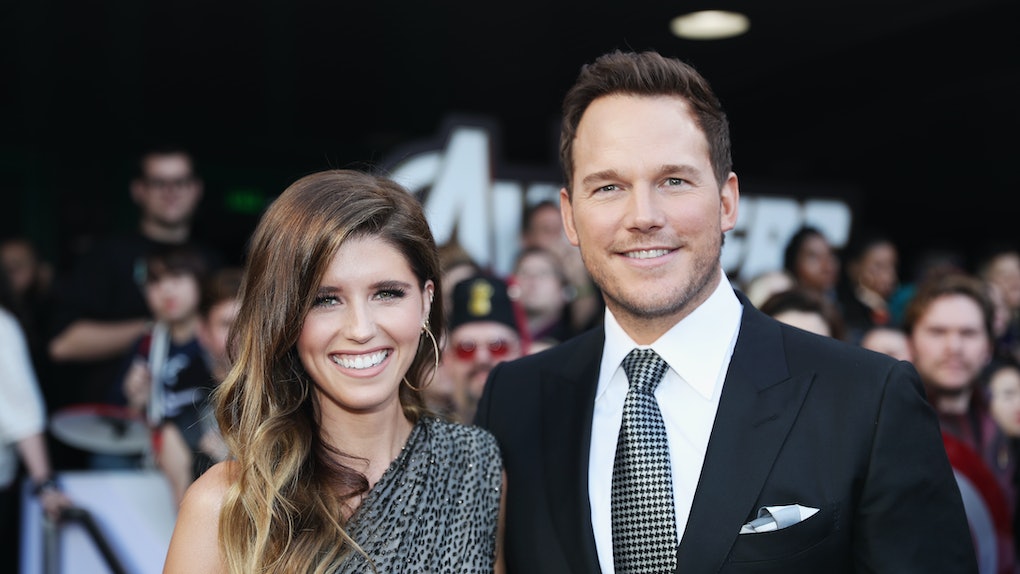 Before wedding bells ring for Chris Pratt and Katherine Schwarzenegger, the couple is making sure that the countdown to their walk down the aisle is a celebratory one with plenty of close friends and family in attendance. On Saturday, April 27, Schwarzenegger was the lady of the hour at a bridal shower held at her mom Maria Shriver's home — and her husband-to-be made the event all the more special by saying a few words. Chris Pratt's reported surprise for Katherine Schwarzenegger's bridal shower included a toast, and TBH, it'll make you stan this couple even more. Elite Daily reached out to both Schwarzenegger and Pratt's reps for comment on the reported shower details, but did not hear back by the time of publication.

According to an inside source, the Avengers: Endgame star had a sweet surprise up his sleeve when he made a late entrance at the bridal shower, per People.

"Katherine lit up when Chris arrived," the source reportedly told the publication. As if his presence wasn't enough of a treat, the actor packed on the romance by sharing a few sweet words about his love.

"He also gave a sweet toast. They were adorable together and he wanted her to have all the attention," the source continued.

Unfortunately, anyone who wasn't in attendance at the bash will just have to imagine what he said, but judging from Pratt's sweet words about his bride-to-be in the past, I'm sure that it was a tribute to their future together.

Back in January, the actor announced that the couple were planning to tie the knot on Instagram, writing, "Sweet Katherine, so happy you said yes! I'm thrilled to be marrying you. Proud to live boldly in faith with you. Here we go!"

From the get-go, it seemed like they knew that the relationship was a special one.

"From the moment they met, it just seemed different for Katherine," a source previously told E! News. "This is definitely the most serious relationship she has had. They haven't been together that long but everyone is rooting for an engagement to happen soon."

Meanwhile, Pratt was reportedly "genuinely excited" to see where things went with the author, and he gave fans a rare glimpse of their relationship and his feelings for his girlfriend just weeks before their engagement with a heartfelt birthday message.

Happy Birthday Chief!" He captioned a collage of photos on Instagram. "Your smile lights up the room. I've cherished our time together. Thrilled God put you in my life. Thankful for the laughs, kisses, talks, hikes, love and care."

While the couple tends to stay out of the limelight, it looks like that could all change after they recently made their red carpet debut as a couple at the Avengers: Endgame premiere on Monday, April 22 and completely slayed it.

Could more public appearances and quotes about each other be in their future as we get closer to their wedding date? Only time will tell, but I'm definitely here for any glimpses we get into their adorable relationship as they prepare to walk down the aisle.